Genetic Mapping of green-stripe in Tomato

Tomato (Solanum lycopersicum) has a high level of genetic variation in fruit color, which is an important fruit quality trait considered by breeders and consumers. The fruit stripe color pattern is determined by the green stripe (gs) locus and is observed only in the peel tissue in tomato. Using two different F2 populations (351 and 97 individuals), we mapped gs to the long arm of chromosome 7 and found that it cosegregated with TOMATO AGAMOUS-LIKE 1 (TAGL1). Association analysis using a TAGL1-specific derived cleaved amplified polymorphic sequences (dCAPS) marker distinguished 118 non-green-striped and 11 green-striped tomato cultivars. The chlorophyll content of green-striped peels (GSPs) was higher than that of light-green peels (LGPs), and the carotenoid content of red peels (RPs) was higher than that of yellow-striped peels (YSPs). Although we did not find sequence variation in the promoter and coding regions of TAGL1 between non-striped and striped tomatoes, TAGL1 expression in the YSPs was lower than that in the RPs. Therefore, the differential expression of TAGL1 may contribute to fruit stripe patterning. Marker-assisted selection using the TAGL1- specific marker identified here will facilitate breeding of fruit stripe patterning in tomato.

Tomato (Solanum lycopersicum) has been extensively bred to improve productivity, resistance to biotic and abiotic stresses, and fruit quality (Kimura and Sinha, 2008). Fruit quality is determined by various characteristics such as nutritional value, taste, flavor, and fruit color (Ho, 2002). Fruit color is an important component of fruit appearance, and considerable attention has been directed toward its characterization (Koskitalo and Ormrod, 1972). Various coloration patterns, such as yellow, orange, brown, and green-striped, are preferred by consumers and attract animals, facilitating seed dispersion (Kang et al., 2017).

The striped-fruit phenotype is an attractive coloration pattern widely used in tomato breeding. Irregular and longitudinal green stripes are visible on the epidermis of immature and mature green-striped tomato fruit (Zamir et al., 1984; Farinha et al., 2009). Longitudinal stripes appear on many fruits such as watermelons, melons, pumpkins, pears, and squashes (Zhai et al., 2019). Melon fruit stripes are conferred by a single dominant gene that has not yet been accurately identified (Liu et al., 2019). In pears, demethylation of the PyMYB10 promoter induces anthocyanin accumulation resulting in red-striped pigmentation (Qian et al., 2014). In apples, methylation of the MdMYB10 promoter induces differential accumulation of anthocyanins, resulting in red and yellow stripes (Telias et al., 2011). However, the molecular mechanisms underlying stripe formation in tomato has not been fully elucidated.

The genomic DNA was extracted from leaves of all plants using the cetyltrimethylammonium bromide method (Murray and Thompson, 1980). The fruit peels of mature green (MG) or red ripe (RR) stages were isolated and immediately frozen with liquid nitrogen and ground to a fine powder for carotenoid and RNA extractions. Green-striped peels (GSP) and light-green peels (LGP) in the MG fruit of LA3682, and yellow-striped peels (YSP) and red peels (RP) in the RR fruit of LA3682 were sampled for RNA extraction. Total RNA was extracted using a Ribospin Seed/Fruit Kit (GeneAll Biotechnology Co., Ltd., Seoul, Korea) from the peel of M82 and LA3682. cDNA was synthesized with DiaStar RT Kit (SolGent Co., Ltd., Daejeon, Korea) following the manufacturer’s instructions.

The linkage map of the green-striped phenotype was constructed with eight insertion/deletion (InDel) markers and one derived cleaved amplified polymorphic sequences (dCAPS) marker (m021) on chromosome 7 (Suppl. Table 1s). The dCAPS marker was developed in reference to the recently described study (Liu et al., 2020). The green-striped phenotype and genotypes of the F2 population were compared to construct the linkage map using MAPMAKER/EXP 3.0 (Lander et al., 1987). A total of 351 F2 individuals from the cross between LA3682 and LA1589, and a total of 97 F2 individuals from the cross between Miniheuksu and IL7-2, were used for cosegregation analysis of the green-striped phenotype. PCR was conducted using a T100 Thermal Cycler (Bio-Rad Laboratories, Inc., Hercules, CA, USA.) with 150 ng of each DNA template and 10 pmol of forward and reverse primers. PCR conditions were 95°C for 3 min, followed by 35 cycles of 95°C for 30 s, the respective annealing temperature for 30 s, and 72°C for 5 min. For the association analysis, we used two dCAPS markers, m021 and m022. PCR products of m021 and m022 were digested with EcoRI (New England Biolabs, Ltd., Ipswich, MA, USA) for 3 h, and SspI (New England Biolabs, Ltd., Ipswich, MA, USA) for 16 h, respectively, at 37°C in 10 µL reactions containing 5 µL of the PCR product, 1 µL of the buffer, 0.3 µL of the enzyme (10 units/mL), and 4.7 µL of distilled water. Digested DNA products were electrophoresed in a 2% agarose gel.

Cloning and Sequencing of TAGL1

qRT-PCR was conducted with 100 ng of the cDNA and specific primers for TAGL1 (Suppl. Table 1s) using the Power SYBR Green PCR Master Mix (Applied Biosystems, Waltham, MA, USA), following the manufacturer’s instructions. qRT-PCR was conducted with three biological and two technical replicates. ACTIN was used to normalize the relative expression of TAGL1. qRT-PCR was conducted using a CFX Connect Real-Time PCR Detection System (Bio-Rad Laboratories, Inc., Hercules, CA, USA). The reaction conditions were as follows: 95°C for 10 min, 40 cycles of 95°C for 15 s and 60°C for 1 min, followed by the melting curve of 95°C for 10 s, 60°C for 5 s, 95°C for 5 s, and 22°C for 5 s.

The peel tissue of LA3682 fruit is distinguished by GSPs and LGPs before maturity, and becomes YSPs and RPs, respectively, during ripening (Fig. 1A). The green-striped phenotype in LA3682 is only observed in the peel tissue, not in the endocarp (Fig. 1B) (Rick and Butler, 1956). We used 351 F2 individuals derived from a cross between LA3682 and LA1589 to map the gs locus (Fig. 2A). Eight InDel markers (Suppl. Table 1s) were developed based on the genome sequence of LA1589 (Tomato Genome Consortium, 2012). gs was localized between the m009 and m016 markers (Fig. 2C). 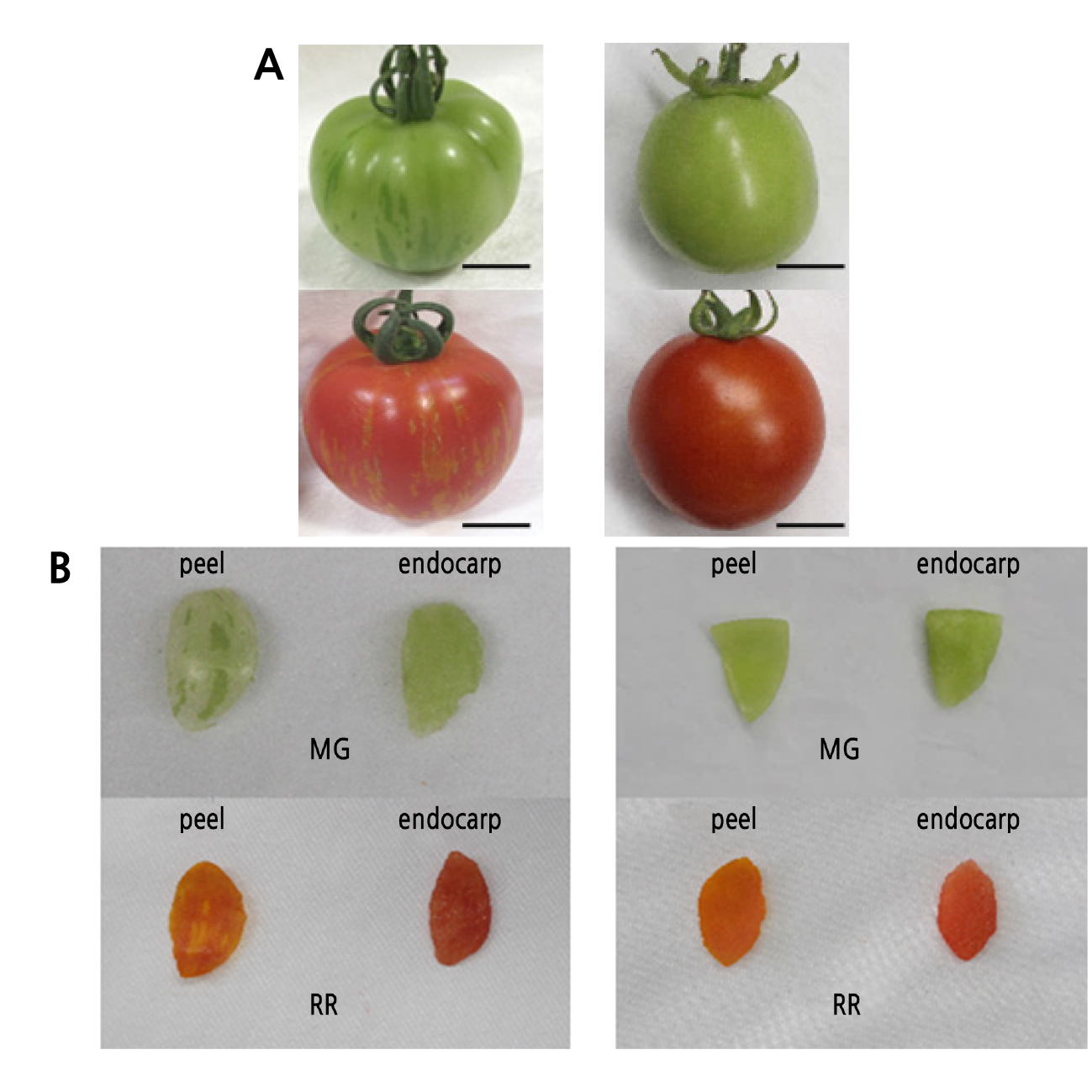 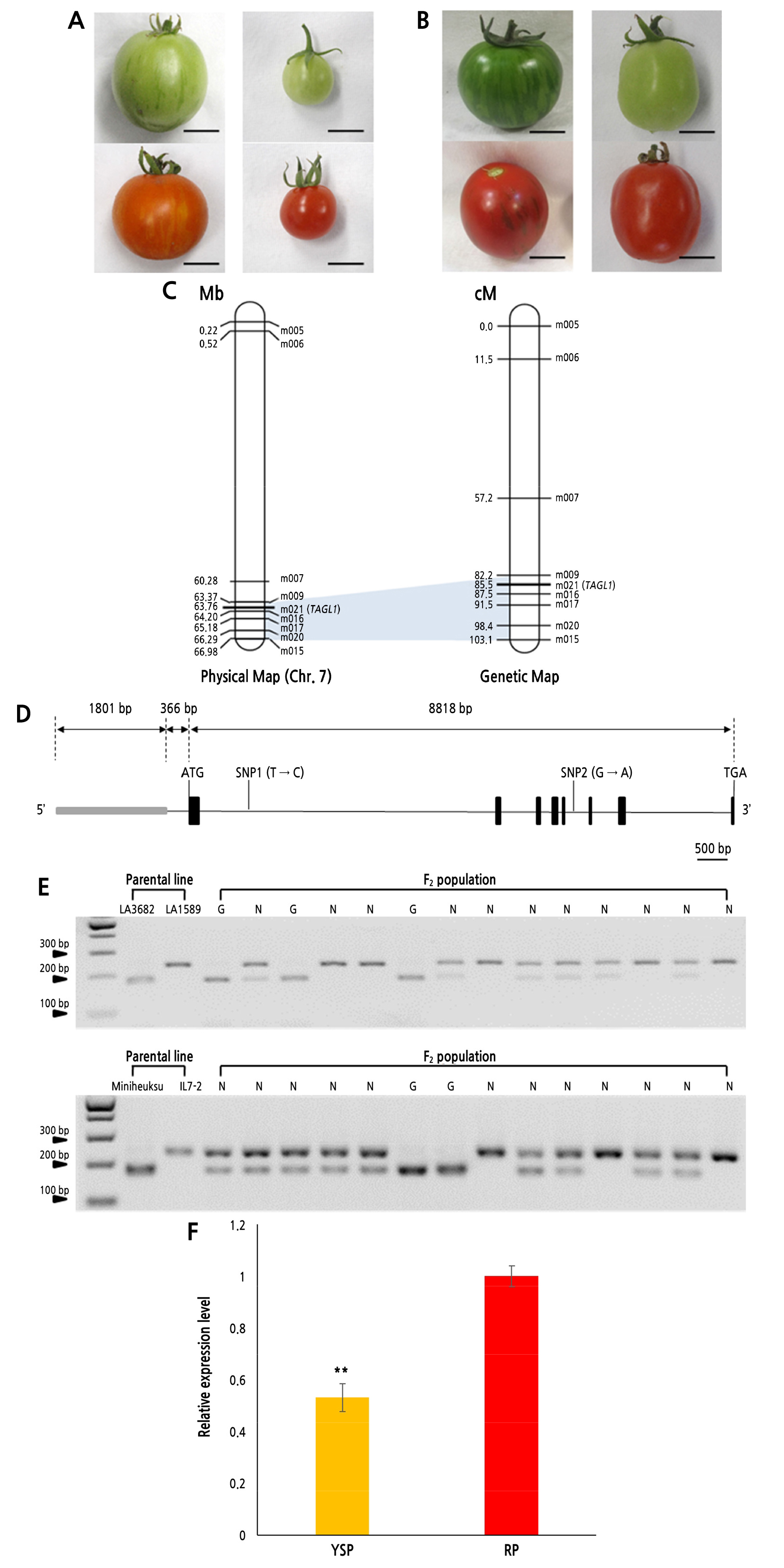 Genetic mapping and cosegregation analysis of the gs locus. (A) Fruits of S. lycopersicum ‘LA3682’ (left) and S. pimpinellifolium ‘LA1589’ (right) in mature green (upper) and red ripe (lower) stages. (B) Fruits of S. lycopersicum ‘Miniheuksu’ (left) and S. lycopersicum ‘IL7-2’ (right) in mature green (upper) and red ripe (lower) stages. (C) Physical map (left) and genetic map (right) of the gs locus on chromosome 7. The LA3682 × LA1589 F2 population was used to construct the map. (D) Schematic representation of the genomic structure of TAGL1. A gray box indicates the promoter (1,801 bp) and black boxes indicate the coding region (8,818 bp). Thin lines indicate introns. The SNPs are located on the first and fifth intron. The scale bar indicates 500 bp. (E) Cosegregation analysis of TAGL1 using 351 F2 individuals from the cross between LA3682 and LA1589 (upper), and 97 F2 individuals from the cross between Miniheuksu and IL7-2 (lower). G: green stripe, N: non-green stripe. (F) Relative expression levels of TAGL1 in YSP and RP tissues of LA3682 (15 days after the breaker stage) using qRT-PCR (n=3). ACTIN was used for normalizing the expression level. The expression level of TAGL1 in RPs was approximately 2-fold higher than that in YSPs. Double asterisks indicate a significant difference at p < 0.01 by t-test (n=3).

Cloning and Sequencing of TAGL1

TAGL1 was recently identified as the candidate gene of the gs locus (Liu et al., 2020). To identify genetic variations associated with the green-striped phenotype, we cloned and sequenced the gDNA and cDNA of TAGL1 in two S. lycopersicum lines, LA3682 and M82. The coding region sequences of the two lines were identical in the promoter, whereas two single nucleotide polymorphisms (SNPs), SNP1 (T to C) and SNP2 (G to A), were observed in the first and fifth introns, respectively, in the gDNA (Fig. 2D). These SNPs were further used for marker development (Fig. 2E).

Cosegregation Analysis for the gs Locus and the Green-Striped Phenotype

Asterisk means wild species. All tomatoes without an asterisk are S. lycopersicum. 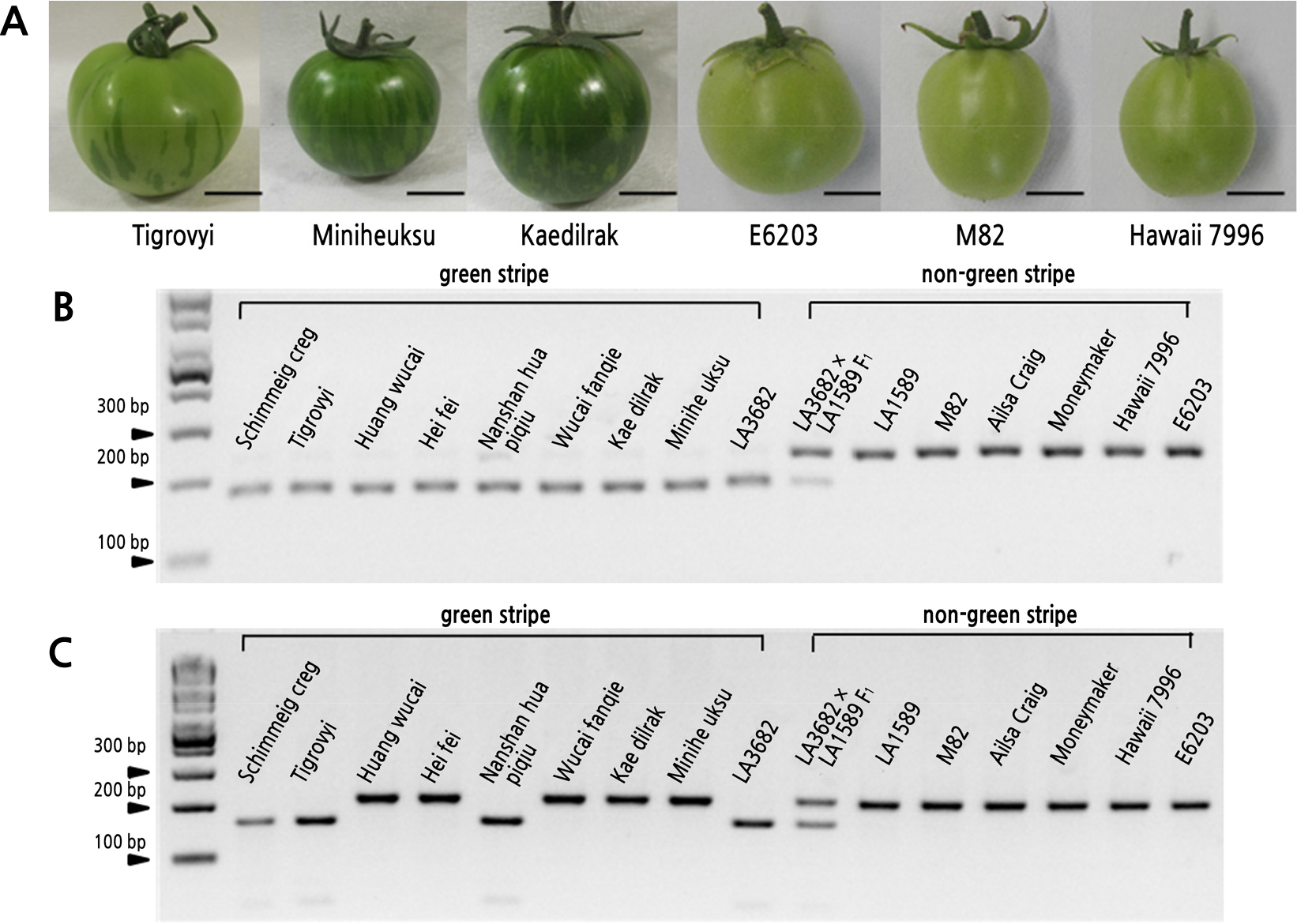 Carotenoid and Chlorophyll Analysis in Peel Tissues of LA3682 by HPLC

Expression Analysis of TAGL1 in the Peel Tissues of LA3682

We analyzed the expression of TAGL1 in the YSPs and RPs of LA3682 (Fig. 2F) and found that TAGL1 expression was significantly reduced in YSPs compared to RPs.

The gs locus was previously localized to the short arm of chromosome 7 of the tomato genome (Rick and Yoder, 1988). However, our mapping result showed that gs is located on the long arm of chromosome 7 between markers m009 and m016 (Fig. 2C). We applied an additional dCAPS marker (m021) (Liu et al., 2020) to our mapping analysis. m021 was located on the physical map at SL4.0ch07_63760487, based on the tomato reference genome (Tomato Genome Consortium, 2012), at the same location as TAGL1.

TAGL1, a MADS-box transcription factor, is responsible for various functions in fruit development and ripening (Vrebalov et al., 2009). In particular, TAGL1 functions as a negative regulator of chlorophyll accumulation in immature fruit and a positive regulator of carotenoid biosynthesis in ripe fruit (Itkin et al., 2009). Based on these functions, TAGL1 was predicted to be the candidate gene of the gs locus.

We analyzed the TAGL1 sequences in LA3682 and M82 and did not find any mutations in the promoter and coding regions of either line. However, SNP1 and SNP2 were found in the first and fifth intron sequences, respectively. Two dCAPS markers based on these SNPs were used for the association analysis between TAGL1 and the green-striped fruits. The green-striped phenotype did not entirely match with the SNP2 genotype while SNP1 was completely associated with the phenotype in all lines (Fig. 3). Therefore, SNP1 can be utilized in marker-assisted selection for the green-striped trait. Our cosegregation analysis for TAGL1 and the green-striped phenotype using two different F2 populations further demonstrated the efficacy of our SNP1 marker (Fig. 2E).

We measured the carotenoid and chlorophyll contents in the GSP, LGP, YSP, and RP tissues of LA3682 fruit (Table 3). As expected, chlorophyll accumulation was promoted in the GSP, and the carotenoid level was downregulated in the YSP compared to the RP. We also conducted expression analysis of TAGL1 using qRT-PCR (Fig. 2F). YSP and RP tissues of LA3682 exhibited a clear distinction in TAGL1 expression, with significantly reduced expression in the YSP and an approximately two-fold higher expression level in the RP. These results corresponded with the pigment analysis results. Hypermethylation of the TAGL1 promoter was recently reported as the major determinant of TAGL1 downregulation (Liu et al., 2020). Here, we highlighted the relationship between TAGL1 expression (Fig. 2F) and carotenoid contents (Table 3) in ripening fruits, and improved marker-assisted selection for tomato cultivars using the TAGL1-specific marker (Fig. 3 and Table 2).

In summary, we identified the location of the gs candidate gene, TAGL1, which controls the development of green stripes in the peels of tomato, through linkage mapping. The chlorophyll contents were higher in GSPs, and carotenoid contents were lower in YSPs. These results corresponded with the low expression level of TAGL1 in YSPs and the high expression level of TAGL1 in the RPs. This may explain the underlying genetic mechanism of green stripes in tomato fruit peels, which turn to yellow stripes during ripening. Although marker-assisted selection is used extensively in tomato breeding for disease resistance (Lee et al., 2015), the use of DNA markers to improve fruit quality is limited. The TAGL1-specific marker will be useful for selection of the fruit stripe trait in tomato breeding.

This research was supported by the National Research Foundation of Korea (2018R1A2B6 002620) and the Vegetable Breeding Research Center, the Ministry of Agriculture, Food and Rural Affairs, Republic of Korea.