The mixed floral buds were microscopically observed using the paraffin sections by the protocol in Wang et al. (2019). The mixed floral buds were dehydrated using an ethanol series (50－100%) and xylene (50 and 100%). Then, the samples were infiltrated with paraffin (24 h, 60°C) and cut into 10-µm-thick sections. The sections were stained with safranin solution and observed by an Olympus BX-51 optical microscope.

Phylogenetic dendrograms were generated using the MEGA 5.01 tool, and the MADS protein sequences (listed in the supplemental information) were aligned by Clustal X2.0 with default parameters. The neighbor-joining trees using the MADS-box proteins were constructed and bootstrap values were calculated for 1000 iterations (Larkin et al., 2007; Tamura et al., 2011). The phylogenetic relationship of the TM8 gene was constructed for multiple species and all gene and protein sequences for the phylogenetic trees are listed in the supplemental information. The motif analysis of CmMADS proteins was performed using the MEME online tool (https://meme-suite.org/meme/tools/meme) (Bailey et al., 2009). The following parameters were used: number of repetitions, any; maximum number of motifs, 10; minimum motif width, 6; and maximum motif width, 60.

Total RNA was extracted separately from Chinese chestnut samples using a Plant RNA Kit (Omega, USA). cDNA was synthesized using M-MLV reverse transcriptase (Takara, Japan). The protocols used for quantitative real-time PCR (qRT-PCR) and primer design were based on the study of Chen et al. (2019). The qRT-PCR analysis was performed by a LightCycler 96 Real-Time PCR with SYBR Green (Takara, Japan). The primers for the CmMADS genes are listed in Suppl. Table 1s. Each qRT-PCR was carried out in a volume of 10 µL, which contained 5 µL of SYBR Premix Ex Taq (2×), 2.5 µL of ddH2O, 2 µL of diluted template (60-fold dilution of cDNA), and 0.25 µL of each gene-specific primer. The following reaction program was used: 95°C for 10 min, followed by 39 cycles at 95°C for 20 s, the annealing temperature based on each pair of primers for 20 s, and 72°C for 20 s. All qRT-PCR experiments were performed with three biological replicates. To verify the specificity of each primer, melting curve analysis was performed from 60°C to 95°C. The raw cycle threshold (Ct) values were calculated using the 2-ΔCt method, and CmActin was employed as a reference gene, which maintained almost constant expression levels under all experimental conditions. The mean relative expression value of CmMADS genes in floral organs are listed in Suppl. Table 2s and Suppl. Table 3s. The heat maps were generated based on the mean relative expression value using the HemI 1.0.3.3 tool.

Identification and Classification of MADS-box Genes in Chinese Chestnut

Type I and type II MADS-box protein phylogenetic trees were constructed by multiple sequence alignments of A. thaliana and the C. mollissimaMADS-box protein sequences. Type I proteins clustered into Mα, Mβ, and Mγ groups (Fig. 2). The Mα group had 15 genes, whereas the Mβ and Mγ groups each contained only 3 genes. Based on the phylogenetic trees, most type I genes were present in specific monophyletic lineages. For example, we observed A. thaliana homologs (AtAGL82 and AtAGL47) for three C. mollissima genes (CmMADS16, CmMADS17, and CmMADS18) of the Mβ group. However, there were no homologous genes in A. thaliana for four genes (CmMADS04, CmMADS05, CmMADS06, and CmMADS07) of the Mα group. Type II genes clustered into the MIKCC and MIKC* groups, with MIKCC containing 12 subgroups (Fig. 3). Type II subfamilies of Chinese chestnut contained similar subgroups based the phylogenetic trees; the exception was subgroup TM8 because there were no members of this subgroup in the A. thaliana genome (Heijmans et al., 2012). Therefore, we used the sequences of P. trichocarpaPtTM8 and P. persicaPpeTM8 for phylogenetic analysis and found CmMADS38 to be a TM8 member in Chinese chestnut, homologous to the genes in P. trichocarpa and P. persica (Fig. 3). To further investigate the CmMADS38 relationship, we created phylogenetic trees of TM8 genes from other plant species. CmMADS38 clearly belongs to a lineage of TM8 from Chinese hickory (Carya cathayensis), walnut (Juglans regia), poplar (P. trichocarpa), and cucumber (Cucumis sativus). Additionally, we identified three Chinese chestnut homologs each for the A. thaliana, AP3, and SVP subgroups; five for the AG subgroup and MIKC* group; four for the SEP subgroup; and two for the AGL6, AGL15, SOC1, and AP1/FUL subgroups. The AGL12, AGL17, and FLC subgroups contain only one homolog. However, no members of the BS subgroup exist in Chinese chestnut, represented by AtAGL63 and AtAGL32 in A. thaliana. 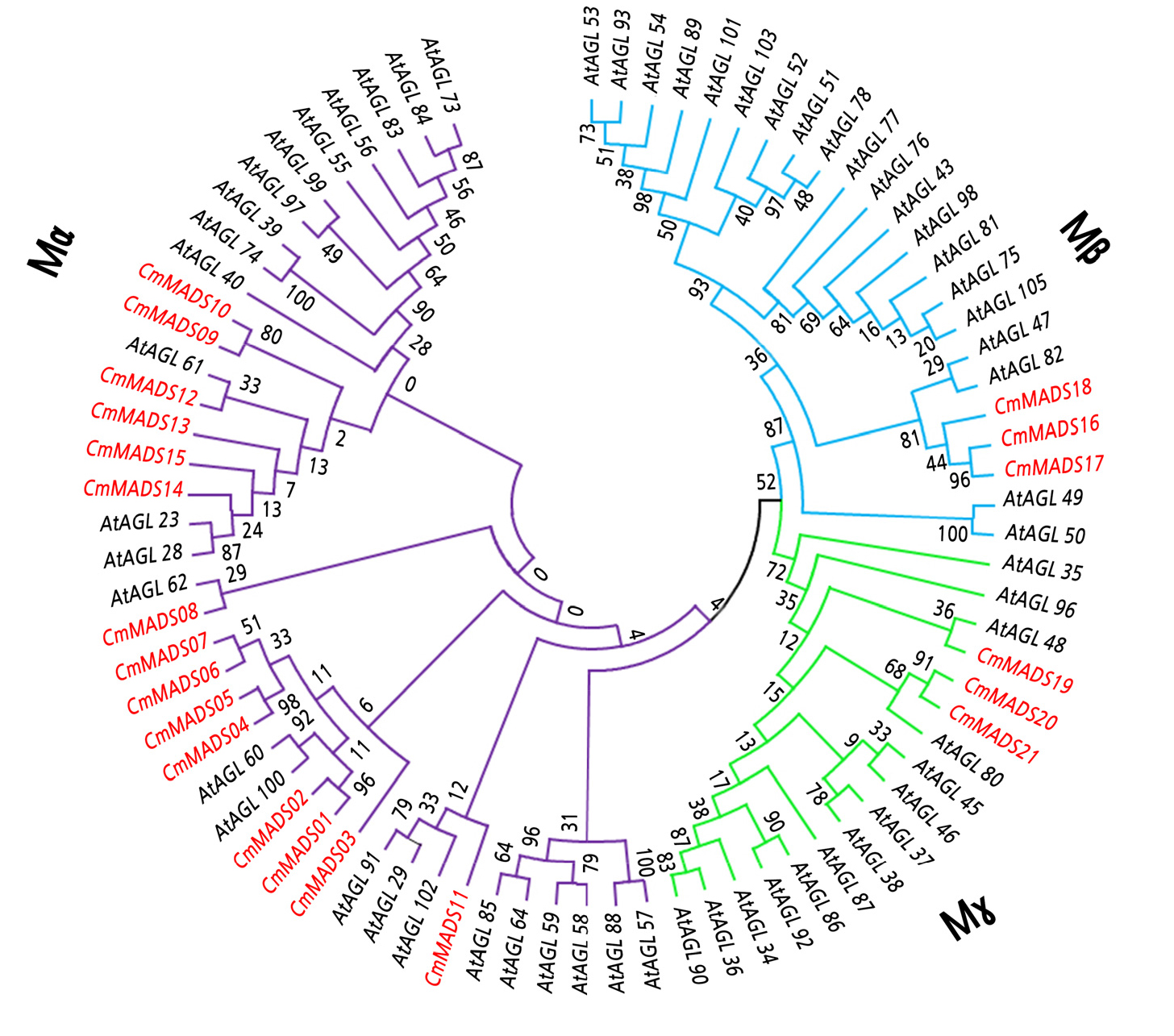 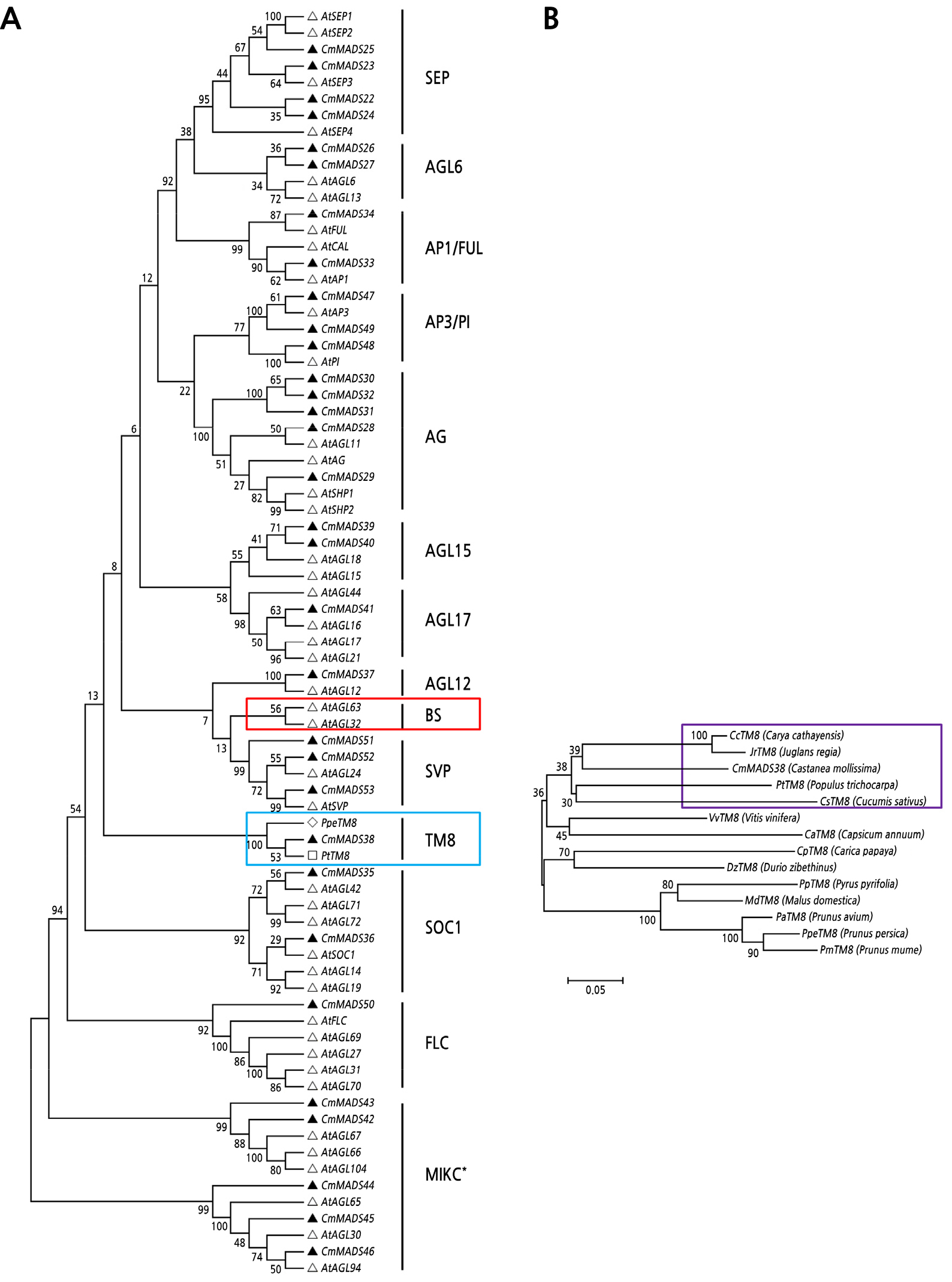 Ten conserved motifs were identified from the 53 MADS-box genes of Chinese chestnut (Fig. 4). Among these motifs, motifs 1 and 2, encoding the MADS domain, were found in all Chinese chestnut CmMADS proteins except for the two Mα-group proteins (CmMADS06 and CmMADS07), which do not contain motif 1. Thus, motif 2 is the most conserved motif in the MADS domain. Motif 3, which denotes the K domain, was found in all MIKCC- and MIKC*-group proteins. However, part of the K domain (motif 3) is also present in CmMADS20 and CmMADS21, which are Mγ-group proteins. The type I clade contained unique motifs, and similar motif compositions are generally shared among proteins of this group (Fig. 4). Comparatively fewer instances of a conserved motif 4, representative of the I domain, were detected among MIKCC- and MIKC*-group proteins, except for CmMADS44. Some type I clade proteins also contain I domains. Finally, motif 10, representing the C-terminal domain of CmMADS proteins, is weakly conserved and present only in some MIKCC group proteins in Chinese chestnut. 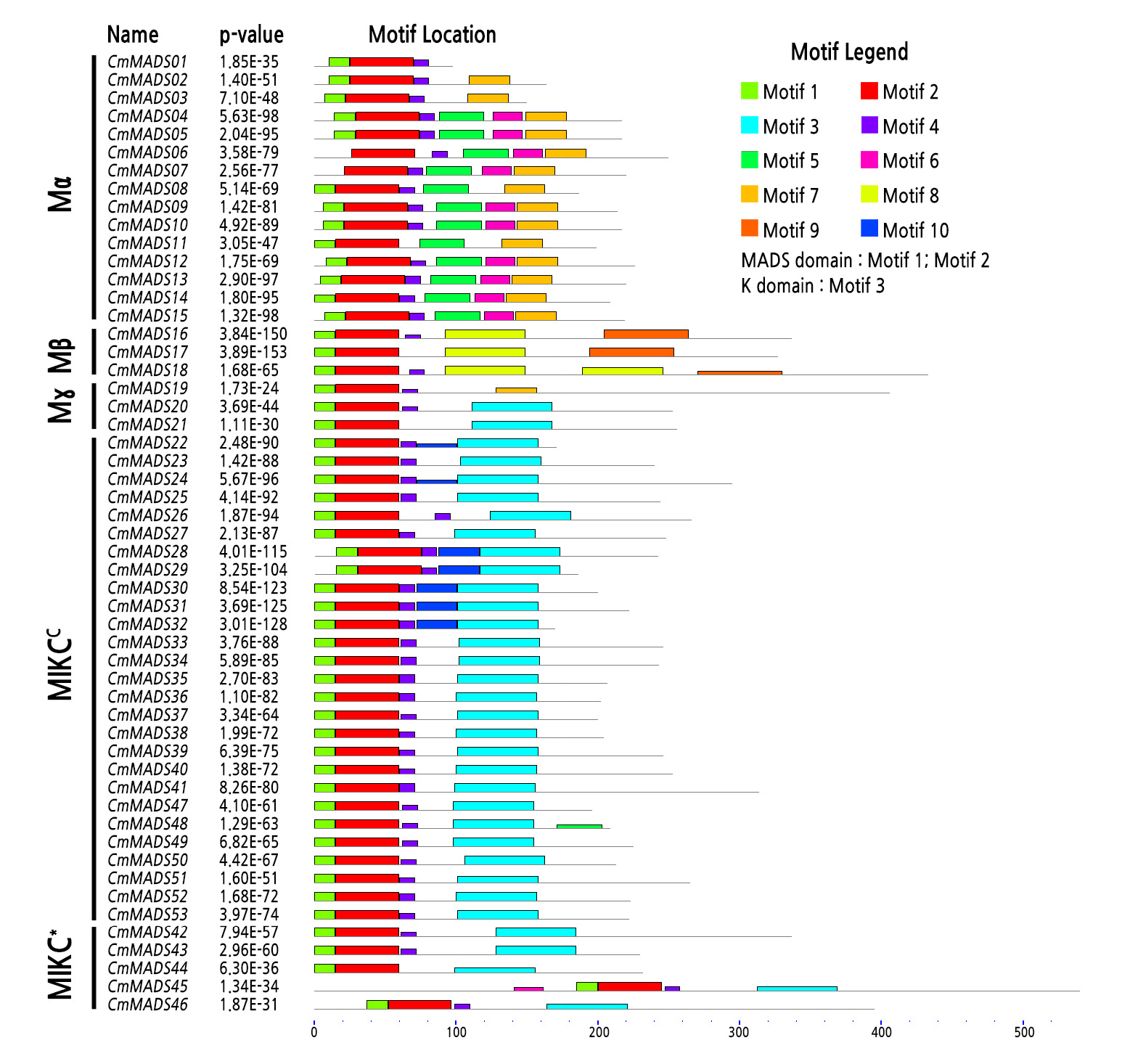 Motif composition of MADS-box proteins in Chinese chestnut. Each motif is represented by a colored block. The lengths and positions of the blocks correspond to the lengths and positions of motifs in the individual protein sequences. The height of each block is proportional to its -log (p-value), truncated at the height corresponding to a motif with a p-value of 1e-10. The gene names and combined p-value are shown on the left side of the figure. The scale pertains to the lengths of the proteins as well as the motifs. 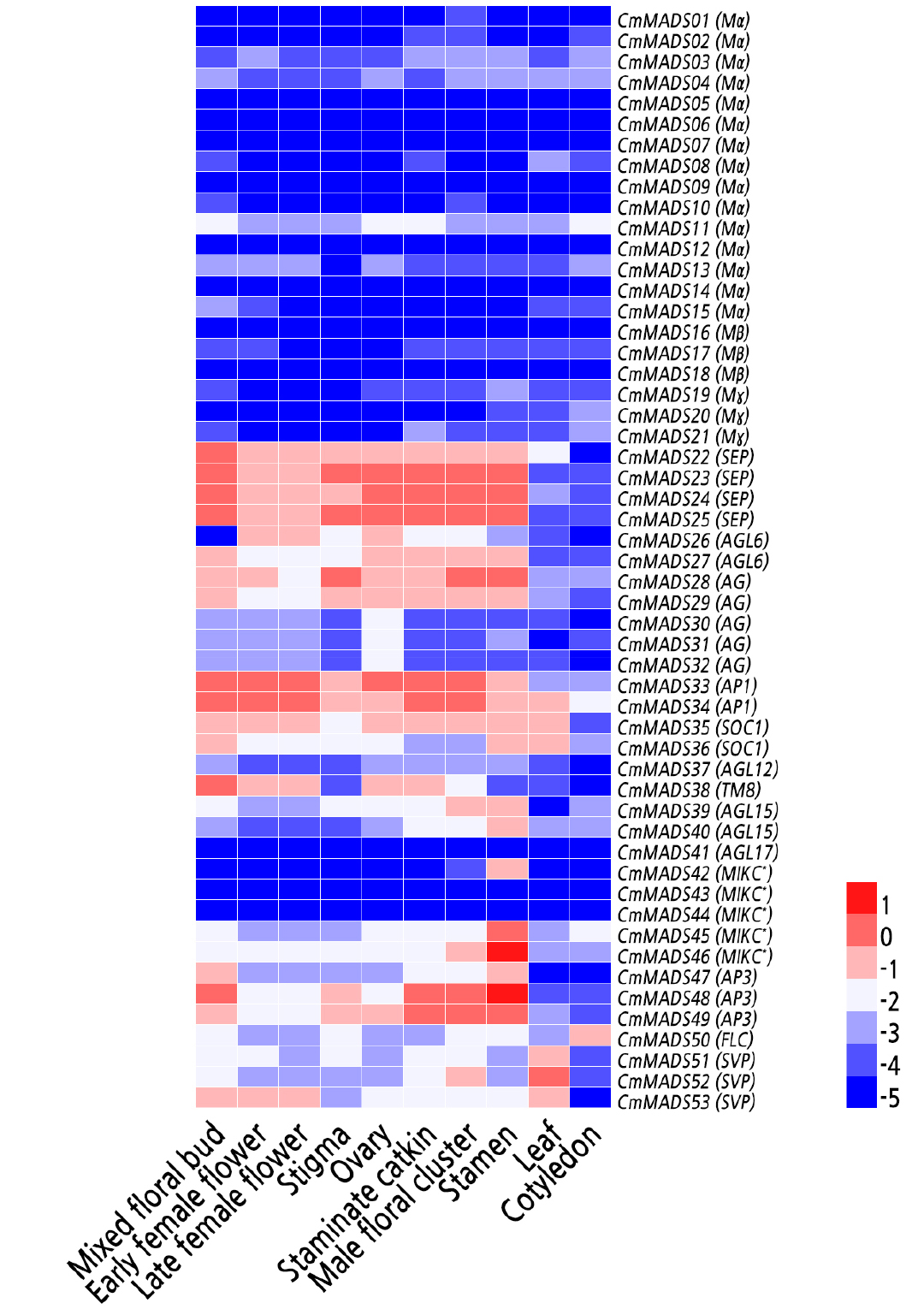 Expression patterns of CmMADS genes in different organs of Chinese chestnut. The heat map was generated based on the mean expression values of the qRT-PCR data from different samples. The mean relative expression values are listed in Suppl. Table 2s, and normalized for the heat map using the HemI 1.0.3.3 tool. CmActin was used as the control. Red and blue represent higher and lower expression, respectively.

To further investigate the roles of CmMADS genes in reproductive organs, the expression of MADS-box genes was analyzed in the inflorescence primordium early differentiation stage (B1), inflorescence primordium later differentiation stage (B2), floral clusters bract primordium formation stage (B3), and floral clusters primordia shaped formation stage (B4). Based on the heat map (Fig. 5), 16 CmMADS genes were highly expressed in floral organs and their expression decreased continuously during mixed floral bud development, though these genes were highly expressed in the B1 stage (Fig. 6). According to the phylogenetic analysis of MADS-box genes, Chinese chestnut contains the TM8 subgroup, which does not exist in A. thaliana, whereas the BS subgroup found in A. thaliana is absent in Chinese chestnut. CmMADS38, a TM8 subgroup gene, was more highly expressed in flower organs than in the leaf and cotyledon, with the highest and lowest amount of transcript among all floral organs in the ovary and stamen, respectively. TM8 was first isolated from the arrested floral meristem of the anantha mutant of tomato (Solanum lycopersicum) but not pursued for more than twenty years (Daminato et al., 2014); thus, TM8 was called the dark side of floral development (Heijmans et al., 2012). Since then, TM8 has been detected in Antirrhinum majus, P. trichocarpa, and V. vinifera, though no TM8-clade genes were functionally characterized in any species until after 2012 (Heijmans et al., 2012). The expression level of TM8 is higher in S. lycopersicum flowers than in leaves and cotyledons, and the greatest amount of transcript is found in petals, followed by anthers. TM8-overexpressing S. lycopersicum plants exhibit anomalous stamens with low-viability pollen, anomalous ovaries and seeds, and altered expression of several floral identity genes belonging to the B-, C-, and E-function groups (Daminato et al., 2014). Therefore, we deduce that CmMADS38 may regulate ovary development and contribute to the low fertility rate and embryo abortion in the ovary of Chinese chestnut.

This research was supported by grants from the National Key Research & Development Program of China (2018YFD1000605), the National Natural Science Foundation of China (Grant numbers 31370679 and 31270719), the Beijing Natural Science Foundation and Scientific Research Key Program of the Beijing Commission of Education (KZ201710020012), and the Project of Construction of Innovative Teams and Teacher Career Development for Universities and Colleges under Beijing Municipality (IDHT20180509).