Development and Application of Polymorphic SSR Markers in Luffa cylindrica

The genus Luffa comprises two cultivated species, Luffa cylindrica (sponge gourd) and L.acutangula (ridged gourd). L. cylindrica is a common vegetable crop mostly cultivated in India, China, and Southeast Asia (Filipowicz et al., 2014). It has high nutritional value and a delicious taste. Specifically, L. cylindrica is rich in carbohydrates and various mineral elements. It also contains various biologically active substances such as glycosides, alkaloids, and flavonoids (Yan et al., 2011). L. cylindrica is also a medicinal plant with special medicinal value, including antimicrobial and anti-cancer properties (Sharma et al., 2019). Compared with other cucurbit crops, research on the genetics and breeding of L. cylindrica has lagged. Until now, most of the new varieties have been improved by traditional methods (Dai et al., 2016).

A total of 24 Luffa samples (Table 1) were used to verify the polymorphism of developed SSR markers. The 24 Luffa samples included landraces and commercial cultivars of L. cylindrica, except for ‘Shengyou’, ‘Meizhou’ and ‘Shengyou × Pingguo F1’ (first generation of interspecific hybrid between L.acutangula ‘Shengyou’ and L. cylindrica ‘Pingguo’).

MISA (http://pgrc.ipk-gatersleben.de/misa/) was used to search for SSR loci of the two L. cylindrica genomes ‘SG2019’ and ‘SO3’. The search parameters were: (1) the SSR length was larger than 22 bp; (2) the length of sequences on both sides of the SSR site was set to 150 bp; (3) motif repeat times ≥ 4; (4) The length of the motif was 2–6, and the corresponding SSR motif types were dinucleotide, trinucleotide, tetranucleotide, pentanucleotide, and hexanucleotide.

Primer3 software was used to design primers for SSR loci found in the two genomes based on the following parameters: ‘prime_product_size_range = 80-160 80-240 80-300; prime_opt_size = 24; prime_min_size = 20; prime_max_size = 28; prime_opt_tm = 63; prime_min_tm = 60; prime_max_tm = 65’. After primer design, the upstream and downstream primer sequences of each SSR locus were aligned back to the reference genome of ‘SG2019’, and only the SSR loci specifically aligned to the primer sequences were retained.

Finally, using ‘SG2019’ as the reference genome, SSR loci with different motif repeats between ‘SG2019’ and ‘SO3’ were identified using the Mummer program (http://mummer.sourceforge.net/manual/).

The SSR reaction system and amplification were performed as described in a previous report (Cui et al., 2017). The amplification products were resolved in 6% polyacrylamide gels and stained with silver. When an SSR marker gave an amplification product on at least one of the samples, this indicated that the marker could be amplified. Based on the electrophoresis results, a clear band was marked as ‘1’ and an absence of a band at the same position was marked as ‘0’, forming a ‘0-1’ matrix. The data were converted into different formats using DataFormater software (Fan et al., 2016) as required. The polymorphism information content (PIC) of each SSR marker was calculated using Powermarker software (Liu and Muse, 2005). The cluster analysis was analyzed using NTSYS-pc software (http://www.appliedbiostat.com/ ntsyspc/ntsyspc.html), whereas the population structure was analyzed using structure software (Pritchard et al., 2000). 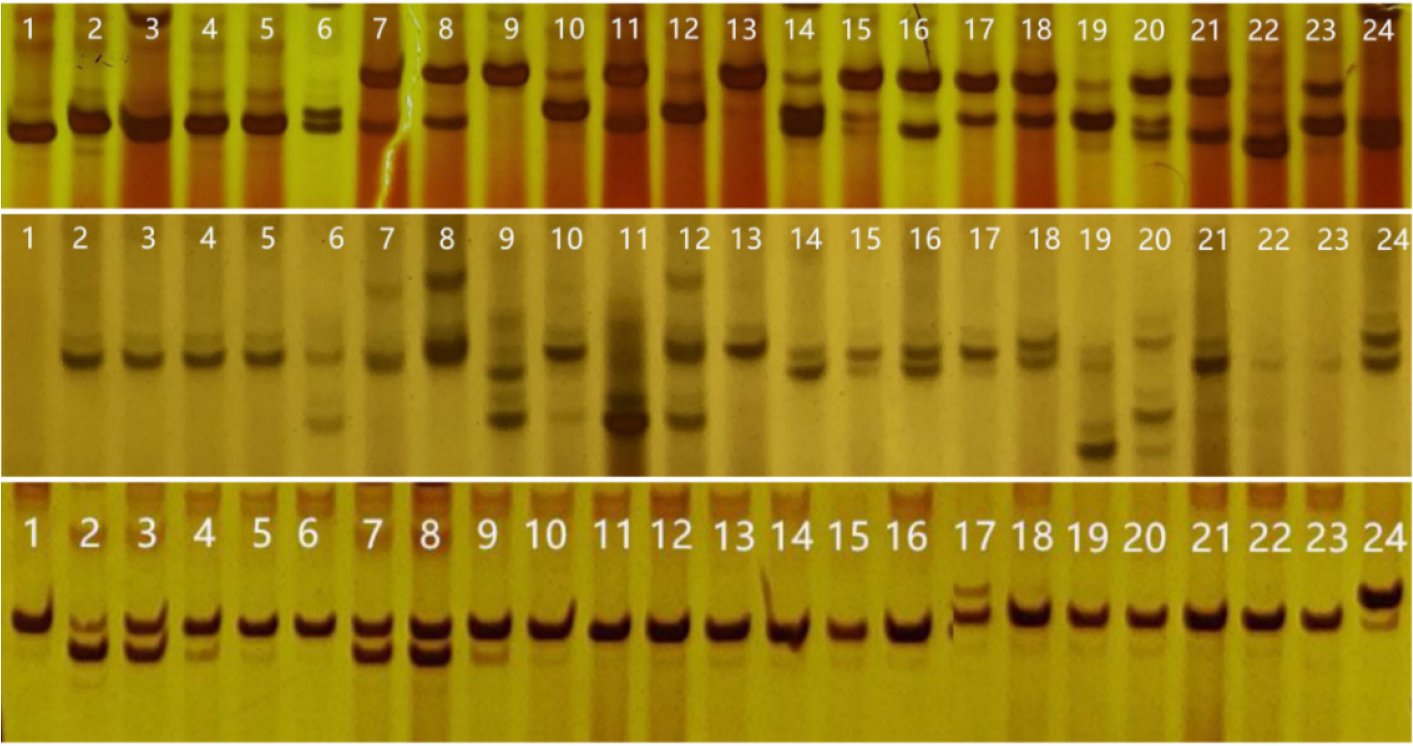 The population structure of the 24 Luffa samples was analyzed using structure software. The structure analysis results were consistent with the clustering results and specifically reflected the kinship of different samples (Fig. 3). For example, a population structure of K ranging from 2 to 4 indicated that the interspecific hybridization, ‘Shengyou × Pingguo F1’ (No. 3), came from two parents. The commercial cultivar L. cylindrica ‘Changfeng’ (No. 23) was more likely to contain a small fraction of genetic background from L.acutangula germplasm. 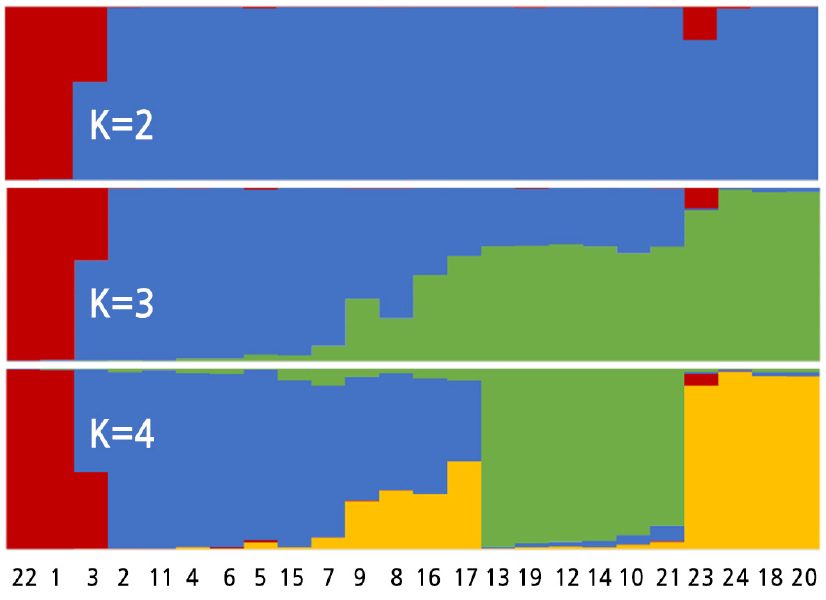 Genome-wide SSR markers of L. cylindrica have recently been developed (Qiao et al., 2021). The availability of efficient and reliable polymorphic markers significantly reduces the screening costs and delays during the validation of large-scale SSR markers. There are few reports on the application of SSR markers in L. cylindrica. For example, there are a few reports on the application of SSR markers for the analysis of genetic diversity of germplasm resources (Liu et al., 2010), the construction of genetic maps and mapping of flowering time (Wu et al., 2016), and the identification of hybrid purity (Zhu et al., 2020).

Based on the standard of polymorphism level (Botstein et al., 1980), only three out of the 32 polymorphic SSR markers verified in this study were highly informative (PIC ≥ 0.50), while the other 28 were reasonably informative (0.25 ≤ PIC < 0.50) or slightly informative (PIC < 0.25). Notably, the difference in polymorphic level between these markers may be largely dependent on the genetic background of Luffa samples amplified. Although we developed a set of polymorphic SSR markers based on two L. cylindrica genomes, the high polymorphic rate observed in the Luffa population provides a reliable guarantee for their utilization. Cluster analysis of 24 Luffa samples showed that L. cylindrica and L.acutangula were separated into two large groups, consistent with the clustering results obtained using other molecular markers such as SRAP (Cui et al., 2012; Wu et al., 2015; Zhu et al., 2016a) and ISSR (Ye et al., 2017; Guo et al., 2020). The huge genetic difference between L. cylindrica and L.acutangula provides great potential for continuous improvement of the two Luffa species. Population structure analysis showed that interspecific hybridization between L. cylindrica and L.acutangula such as ‘Shengyou × Pingguo F1’ (No. 3) or genetic introgression such as ‘Changfeng’ (No. 23) could be an effective approach to genetic improvement of the Luffa species. Among the L. cylindrica samples, except that the only one sample with round-shaped fruit ‘Pingguo’ (No. 2) and the only one sample with wrinkled fruit skin ‘Zaozhou No.2’ (No. 8) was assigned to group II-1 and group II-2, respectively, the remaining samples showed a relatively close genetic distance, suggesting that fruit shape and skin were typical grouping characteristics. In conclusion, the polymorphic SSR markers developed from two L. cylindrica genomes in this study have a high polymorphic rate in Luffa species and can be used as primary candidate markers for genotyping Luffa species in the future.

This study was supported by a project of the Foshan plant germplasm resources engineering technology research center (BKS208024).