Lemon (Citrus limon), an interspecific hybrid between sour orange and citron, has been widely used as a rootstock along with trifoliate orange. Though lemons are superior to trifoliate orange in terms of their high seed germination rate throughout the year, one of the obstacles to using lemons as rootstocks is the lack of reliable, lemon-specific molecular markers to discriminate buds of the micro-grafted scion from those of the lemon rootstock. In order to obtain lemon-specific molecular markers, we compared the whole-plastid genomes available from four citrus species (lemon, pummelo, sweet orange, and mandarin) and developed seven plastid insertion/deletion (InDel) markers. The plastid InDel markers were applied to 46 citrus accessions that included lemons (17 accessions), grapefruit, mandarin, pummelo, sour orange, orange, papeda, tangor, and tangelo groups. The resulting dendrogram revealed that the citrus accessions used in this analysis could be distinctly classified into seven clusters. Lemons formed a separate cluster and had identical allele sizes for each InDel locus among all accessions investigated. This set of InDel markers could be a useful molecular tool for the rapid and clear discrimination of micro-grafted scions and lemon rootstocks during the production of virus-free citrus trees. The plastid InDel markers with maternal inheritance features can also be used to analyze the phylogenetic origin of various citrus cultivars including lemons.

Lemons are cultivated in Mediterranean, subtropical, and intertropical climates worldwide. However, only a few lemon varieties are cultivated worldwide for the production of fresh fruits and essential oils or for use as rootstocks, although substantial genetic diversity exists in this citrus group (Curk et al., 2016). In Korea, lemons have been commercially cultivated since the year 2000 and around 100 farms currently produce lemons from a cultivated area of 30 hectares. This cultivation area is expected to increase due to continuous market demands and farm profitability in Korea. Eureka-type lemons, such as ‘Allen’, ‘Frost’, and ‘Cook’, are mainly cultivated in Korea. It is difficult to clearly identify lemon varieties, even though various types of lemons, including ‘Lisbon’ and ‘Meyer’, are also assumed to be introduced into Korea. Microsatellite markers would be a robust molecular tool for identifying citrus cultivars including lemons (Woo et al., 2020).

Trifoliate orange [Poncirus trifoliata (L.) Raf.] rootstocks have been widely used in the citrus industry, including in Korea, due to several merits including a compact canopy, fruit quality, cold hardiness, and resistance to pathogens and pests. The rootstock trifoliate is quite suitable for satsuma mandarin (C. unshiu Marc.) that is the most prevalent citrus in Korea, accounting for approximately 87% of the citrus production in the year 2019. Recent trends for diversification of commercial citrus cultivars resulted in increased demand for more rootstock varieties (Kawase et al., 1987; Donadio et al., 2019). Various rootstock varieties such as lemons and their hybrids, lime, citrange, citrumelo, and Cleopatra mandarin were developed (URL https://citrusvariety.ucr.edu/citrus/rootstocks.html) and have been used in the citrus industry due to the drawbacks of trifoliate orange rootstocks, including incompatibility with several cultivars, virus problems, and nonvigorous growth (Kawase et al., 1987). In addition to these drawbacks, the seed germination rate of trifoliate orange rapidly decreases after May, whereas lemon seeds maintain a high germination rate throughout the year, guaranteeing high seedling yield and quality for rootstock production. However, a critical problem is that it is very hard to identify the genetic origin of new shoots when the micro-grafted scions are germinated on lemon rootstocks.

In this study, we developed reliable, lemon-specific, multi-locus InDel markers from the comparative analysis of citrus plastid genomes including lemon, pummelo, sweet orange, and mandarin. This set of markers would be a useful molecular genetic tool for the rapid and clear discrimination of micro-grafted scion cultivars and lemon rootstocks during the production of virus-free citrus trees and for the guarantee of nursery stock quality in the citrus industry. The InDel markers from the maternally inherited plastid genome can also be used to analyze the phylogenetic origin of various citrus cultivars including lemons.

The citrus samples used in this research were obtained from two public institutes in the Republic of Korea: Citrus Research Institute, National Institute of Horticultural and Herbal Science, Rural Development Administration, and Agricultural Research and Extension Services, Jeju Special Self-Governing Province. Leaf tissues were rinsed with running tap water and then stored at －70°C until use. Genomic DNA (gDNA) was purified from the leaf tissue using the Biomedic® Plant gDNA Extraction Kit (Biomedic Co., Ltd., Bucheon, Korea). The quantity and quality of the purified gDNA were determined by the DeNovix DS-11+ spectrophotometer (DeNovix, Wilmington, DE, USA) and agarose gel electrophoresis.

Since the complete chloroplast genome of C. sinensis (L.) Osbeck ‘Ridge Pineapple’ was first reported in 2006 (Bausher et al., 2006), the complete plastid genomes of nine citrus species are currently available from the organelle genome resources of the National Center of Biotechnology Information (NCBI) (URL https://www.ncbi.nlm.nih.gov/ genome/browse#!/organelles/citrus). Recently, the complete chloroplast genome sequence of a medicinal landrace citrus ‘Jinkyool’ (C. sunki) in Jeju, Korea was also reported (Yoo et al., 2020). From the comparative in silico analysis of the whole-plastid genomes of C. limon, C. maxima, C. sinensis, and C. reticulata, we mined 20 putative major InDel loci (> 2 bp) specific to lemon or the other citrus species. From the primary screening by routine PCR using several citrus accessions of the four citrus species, we finally selected seven plastid InDel loci out of eight candidates (Table 1). Amplicon sizes of the selected InDel loci ranged from 252 (Limon#21) to 400 base pairs (bps) (Limon#16). All of the selected InDel loci were located in inter-genic spacers or introns (Table 1 and Suppl. Fig. 1s). This result corresponds to the fact that high-resolution of DNA barcodes for species identification and phylogenetic analysis in plants have been primarily found in the non-coding regions of the plastid genome (Hollingsworth et al., 2011; Jiao et al., 2019). The forward primers were tagged with 18-mer of the M13 sequence for efficient fragment analysis of the seven InDel loci by the cost-effective M13-tailed PCR method (Schuelke, 2000) (Suppl. Table 1s).

List of primers for the amplification of seven InDel loci

In this study, we used 46 citrus accessions belonging to lemon, grapefruit, mandarin, pummelo, sour orange, orange, papeda, tangor, and tangelo groups, which were obtained from two public institutes in Korea (Table 2). Seven polymorphic InDel markers were applied to the citrus accessions to determine their genotypes (Suppl. Table 2s). Table 3 shows the genetic characteristics of the plastid InDel loci based on the genotype analysis of 46 citrus accessions. A total of 23 alleles, ranging from 2 (Limon#13, Limon#21, and Limon#22) to 5 (Limon#15 and Limon#23) per locus, were observed among the 46 accessions, with an average of 3.3 alleles per locus. Major allele frequency (MAF) varied from 0.37 to 0.76. The average genetic diversity (GD) value was 0.53, ranging from 0.36 to 0.74, and the average polymorphism information content (PIC) value was 0.47, ranging from 0.30 (Limon#13, Limon#21, and Limon#22) to 0.69 (Limon#23).

Citrus samples used in this study

SS, sample size; NOBS, number of observations; Availability is defined as 1-OBS/n, where OBS is the number of observations and n is the number of individuals sampled.; NG, Genotype number; MAF, major allele frequency; NA, number of alleles; GD, genetic diversity. GD, often referred to as expected heterozygosity, is defined as the probability that two randomly chosen alleles from the population are different.; PIC, polymorphism information content.

A total of 23 alleles derived from the seven polymorphic InDel loci were used to analyze the genetic relationships among the 46 citrus accessions. An UPGMA dendrogram was constructed based on the genetic similarity matrices among the accessions. Fig. 1 illustrates the results of the cluster analysis based on the genotype data of the seven plastid InDel loci. The resulting dendrogram revealed that the accessions used in the analysis could be distinctly classified into seven groups, forming a separate lemon cluster. This result suggests that these seven plastid InDel loci comprise a robust marker set to reliably discriminate scion cultivars from lemon rootstocks. Phylogenetic analysis using mitochondrial InDel and chloroplastic SSR markers showed that all C. limon accessions investigated clustered to the sour orange group with C. aurantium and C. limetta, etc., and were separated from the other five groups, which were the citrons (including C. medica only), C. micrantha (including C. aurantifolia and C. aurata, etc.), edible mandarins (including C. kinokuni, C. deliciosa, and C. clementina, etc.), wild mandarins (including C. sunki, C. reticulata, and C. limonia, etc.), and pummelos (including C. maxima and C. paradisi, etc.) (Curk et al., 2016). This report supports our dendrogram forming a lemon group that is separated from other citrus species (Fig. 1). Similar tree topology was also observed from the dendrogram of citrus genetic resources that were constructed using 17 nuclear SSR markers (Woo et al., 2019; Woo et al., 2020). 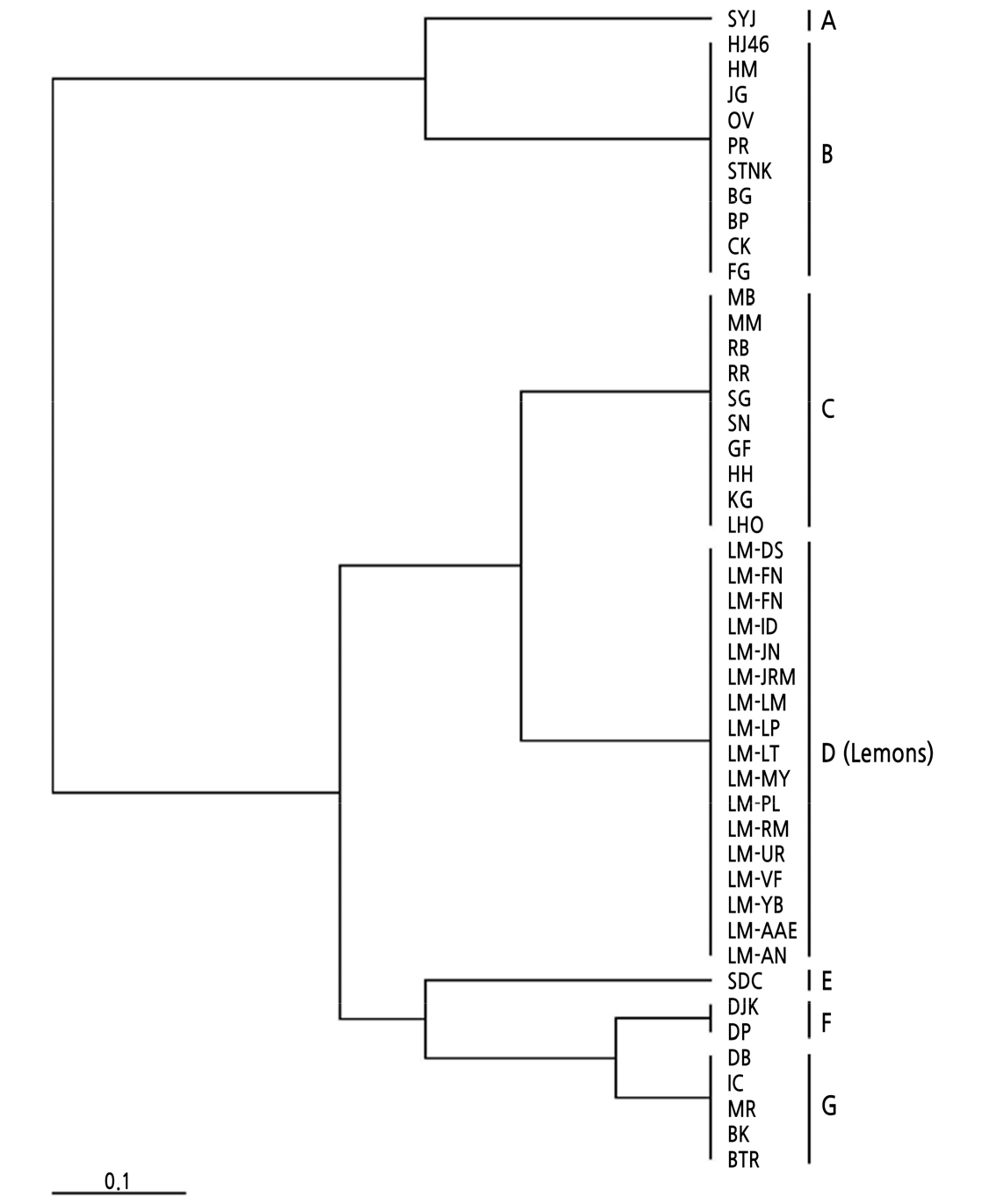 An UPGMA dendrogram based on the genetic distances among 46 citrus accessions using seven plastid InDel markers.

DNA barcoding is an effective tool that enables rapid and accurate identification of plant species. However, single-locus DNA barcodes lack adequate variation in closely related taxa. Recent accumulation of whole-plastid genome sequences within closely related taxa has allowed researchers to develop cost-effective and reliable barcodes for accurate plant identification (Li et al., 2015). As shown in this study, reliable, multi-locus barcodes from the comparative analysis of whole-plastid genomes can increase our ability to distinguish closely related horticultural taxa such as citrus.