The study aim here is to discover a short-term low-temperature method before harvest that can increase the bioactive content of Salvia plebeia R. Br. grown in a closed-type plant production system (CPPS) while maintaining the marketable quality of this herb. Salvia plebeia R. Br. was cultivated for 36 d in a CPPS with a deep floating technique and a recycling system. Low- temperature treatments (15°C) were applied for 1, 3, 5, 10, and 15 days prior to harvest (D1, D3, D5, D10, and D15). The fresh weights of the roots did not differ significantly among the low-temperature treatments. However, the leaf length, leaf width, leaf shape index and fresh and dry weights of the shoots decreased in D5, D10, and D15. The chlorophyll fluorescence decreased for up to three days of the low-temperature treatment and then increased after five days at the low temperature. The total phenolic and flavonoid contents were highest in D3. The findings here suggest that in order to increase the content of bioactive compounds without decreasing the growth of Salvia plebeia R. Br, exposing the plants to low temperatures three days before harvest is a viable strategy.

The contents of bioactive compounds differ under different harvest periods, climates, and cultivation conditions (Zhao et al., 2008). Most medicinal plants used in Korea have non-uniform contents of bioactive compounds because they are harvested in the wild or grown in open fields and have irregular harvest periods (KREI, 2012; RDA, 2015). Therefore, the supply of many medicinal plants is intermittent with non-uniform quality of the bioactive components and yield. Therefore, it is necessary to develop a cultivation technology capable of controlling the environmental conditions for the stable supply and uniform quality of medicinal plants.

The closed-type plant production system (CPPS) achieves such optimal conditions by artificially controlling environmental conditions such as light levels, air temperatures, relative humidity levels, CO2 concentrations, and nutrient solutions (Takatsuji, 2008). CPPSs offer the advantages of year-round stability and the ability to produce crops of a high and uniform quality by providing the proper conditions. However, a disadvantage of the CPPS is that it requires a high initial investment and costly facilities (Lee and Cha, 2015). It is important to determine the economic feasibility of the commercial use of a CPPS. Recently, there have been many studies to improve the economic feasibility of CPPSs with the production of value crops (Heo et al., 2015; Heo and Baek, 2021).

Plants accumulate various bioactive compounds under stress conditions (Davies, 1995). These bioactive compounds prevent oxidative damage in the plants and prevent diseases caused by oxidative damage and cardiovascular diseases in humans (Stephen, 1999; Voutilainen et al., 2006). However, excessive stress conditions cause decreases in plant growth outcomes and yields (Boyer, 1982). Therefore, increasing the levels of bioactive compound without reducing the growth of crops can be a useful cultivation technique (Lee and Oh, 2015).

Temperature is one of the most important environmental conditions for plant growth. Growing plants under abnormal temperature conditions causes various physiological disorders and decreases their productivity (Lim et al., 2000; Hatfield and Prueger, 2015; Son et al., 2015). Sanghera et al. (2011) reported that excessively low temperatures cause stress during the cultivation period, leading to physiological disorders in plants due to the accumulation of osmolytes, the generation of reactive oxygen species, and degeneration of the cell membrane. However, other studies reported that plants under low-temperature stress show increased bioactive compound contents. Lee and Oh (2015) reported that short-term low-temperature conditions increased the phenolic compounds of kale. Other studies have reported that these short-term temperature stress can increase the bioactive compound contents of plants (Oh et al., 2009; Lee et al., 2012; Lee et al., 2014) However, research on bioactive compound contents in plants under low-temperature conditions is limited to only certain crops (Lee and Oh, 2015), meaning that there is a need for research applicable to growing various medicinal crops with CPPSs.

Therefore, this research was conducted to discover a short-term low-temperature treatment method that can be applied before harvest to increase the bioactive compound content of Salvia plebeia R. Br. When grown in a CPPS while maintaining its marketable quality.

After the low-temperature treatment, the leaf length, leaf width, fresh and dry weights of the shoots and roots, the number of leaves, the leaf area, the SPAD value, and the chlorophyll fluorescence were measured. The leaf area was measured using a leaf area meter (LI-3100, LI-COR Inc., Nebraska, USA). Fresh weights of shoots and roots were obtained using an electronic balance (EW 220-3NM, Kern and Sohn GmbH., Balingen, Germany), and the dry weights of the shoots and roots were measured after drying these components in an oven (Venticell-222, MMM Medcenter Einrichtungen GmbH., Munich, Germany) at 70°C for 72 h. The SPAD value was measured using a portable chlorophyll meter (SPAD-502, Konica Minolta Inc., Tokyo, Japan). The chlorophyll fluorescence was measured on third leaf from the top using a portable chlorophyll fluorescence meter (FluorPen FP100, Photon Systems Instruments Brno, Czech Republic). The specific leaf area (SLA) and leaf shape index (LSI) were calculated as per the following formulae:

A 1 g leaf sample was immediately frozen in liquid nitrogen and then finely ground. To extract the phenolic compounds, the sample was mixed with 5 mL of 80% methanol. The mixture was shaken for 24 h at room temperature and then centrifuged at 10,509 ×g for 10 min. After centrifugation, the supernatant was used to determine the total phenolic concentration. The total phenolic concentrations in Salvia plebeia R. Br. samples were determined using the Folin–Ciocalteu reagent method of Singleton and Rossi (1965). Approximately 200 µL of extract was mixed with 300 µL distilled water and 250 µL 2N Folin–Ciocalteu reagent (Sigma-Aldrich Co., St. Louis, MO, USA). The mixture was then combined with 1.25 mL of 20% Na2CO3, vortexed for 5 s, and incubated at room temperature for 20 min. The absorbance of the supernatant was measured with a spectrophotometer (Libra S22, Biochrom Ltd., Cambridge, UK) at 735 nm to determine the total phenolic concentration, which was expressed as g gallic acid equivalent (GAE) per mg of FW.

The experiments were repeated three times with ten plants per repetition for each treatment, each in a randomized complete block design. After selecting plants of a uniform size, nine plants per treatment were used to determine the plant growth parameters. The statistical analysis was carried out using the Statistical Analysis System program (SAS 9.1, SAS Institute Inc., Cary, NC, USA). Experimental results were subjected to analysis of variance (ANOVA) and Duncan’s multiple range tests. The SigmaPlot program was used for graphing (SigmaPlot 12.0, Systat Software Inc., San Jose, CA, USA).

The growth parameters of Salvia plebeia R. Br. 36 days after transplanting are shown in Table 1. The fresh weights of the roots did not differ significantly among the low-temperature treatments. However, the leaf length, leaf width, and fresh and dry weights of the shoots were decreased in D5, D10, and D15. Sanghera et al. (2011) reported that excessively low temperatures (0–15°C) cause physiological disorders in plants. Earlier studies reported that low temperatures decreased the growth of hot pepper and kale (Park et al., 2014; Hwang et al., 2017). In our study, the growth of Salvia plebeia R. Br. decreased when exposed to a low temperature for more than five days.

The numbers of leaves, leaf area, SLA, and LSI tended to decrease as the duration of the low-temperature treatment was increased (Fig. 3). Williams and Black (1993) reported that the leaf area of Pennisetum setaceum decreased as it was exposed to a low-temperature condition. In this study, as the duration of the low temperature increased, the leaf area decreased, and it appears that the decrease in the number of leaves affected the decrease in the leaf area. The SLA is related to the thickness of the leaf, and a high SLA means a thicker leaf. Rodríguez et al. (2015) reported that cabbage and kale had thicker leaves when exposed low temperatures. In the current study, in the D10 and D15 treatments, which had long periods of exposure to a low temperature, the SLAs were lower (0.19 and 0.21, respectively). These findings suggest that the decrease of the dry weight of the shoots at the low temperature affected the SLA.

Chlorophyll fluorescence (Fv/Fm) decreased in the D3 treatment and then increased as the period of exposure to the low temperature increased (Fig. 4C). It is known that chlorophyll fluorescence decreases when a plant is exposed to biotic or abiotic stress (Kycko et al., 2018). Under optimal conditions, the Fv/Fm ratio of plants is known to be about 0.83 (Maxwell and Johnson, 2000); if the Fv/Fm ratio decreases to less than 0.83, the plant is under stress. In our results, the Fv/Fm of Salvia plebeia R. Br. decreased for up to three days at the low temperature and increased again after five days. It appears that the plant adapted to the low temperature after five days and that the defense mechanism of the plant was activated. 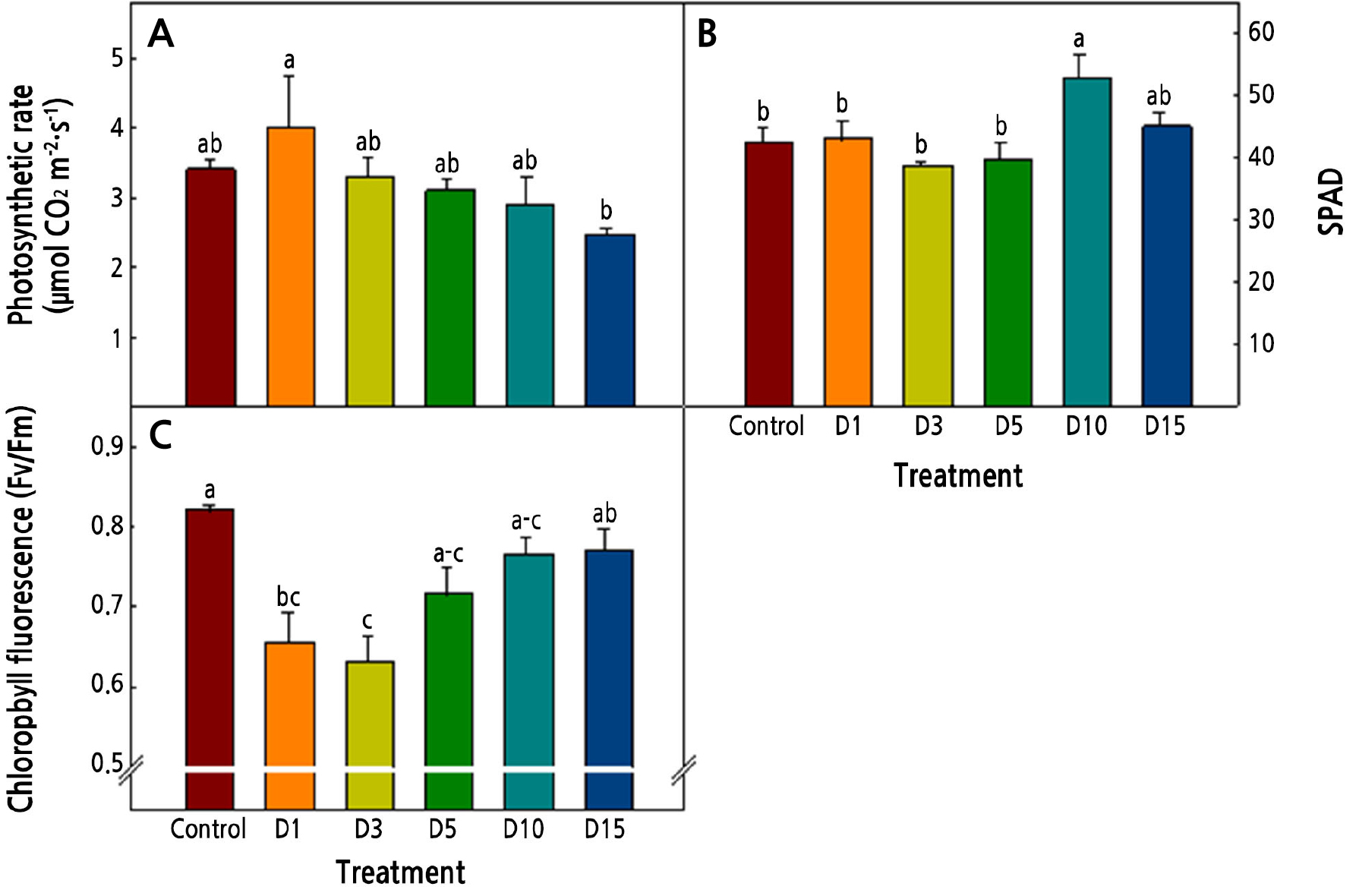 The total phenolics and flavonoids of Salvia plebeia R. Br. exposed to low temperatures are shown in Fig. 5. Under environmental stress conditions, the plants accumulated these bioactive compound contents (Dixon and Paiva, 1995). Early studies reported that many crops show increased bioactive compound contents when exposed to low-temperature conditions (Rivero et al., 2001; Oh et al., 2009; Neugart et al., 2012). In this study, the total phenolic and flavonoid concentrations of Salvia plebeia R. Br. were highest in the D3 and D10 treatments (Fig. 5A and 5C); however, the total contents in the plants were highest in D3 (Fig. 5B and 5D). The concentrations of total phenolics and total flavonoids tended to decrease with the duration of exposure to the low temperatures, and in the D3 treatment, there was relatively little reduction in growth such that the D3 plants had high total phenolic and flavonoid contents. 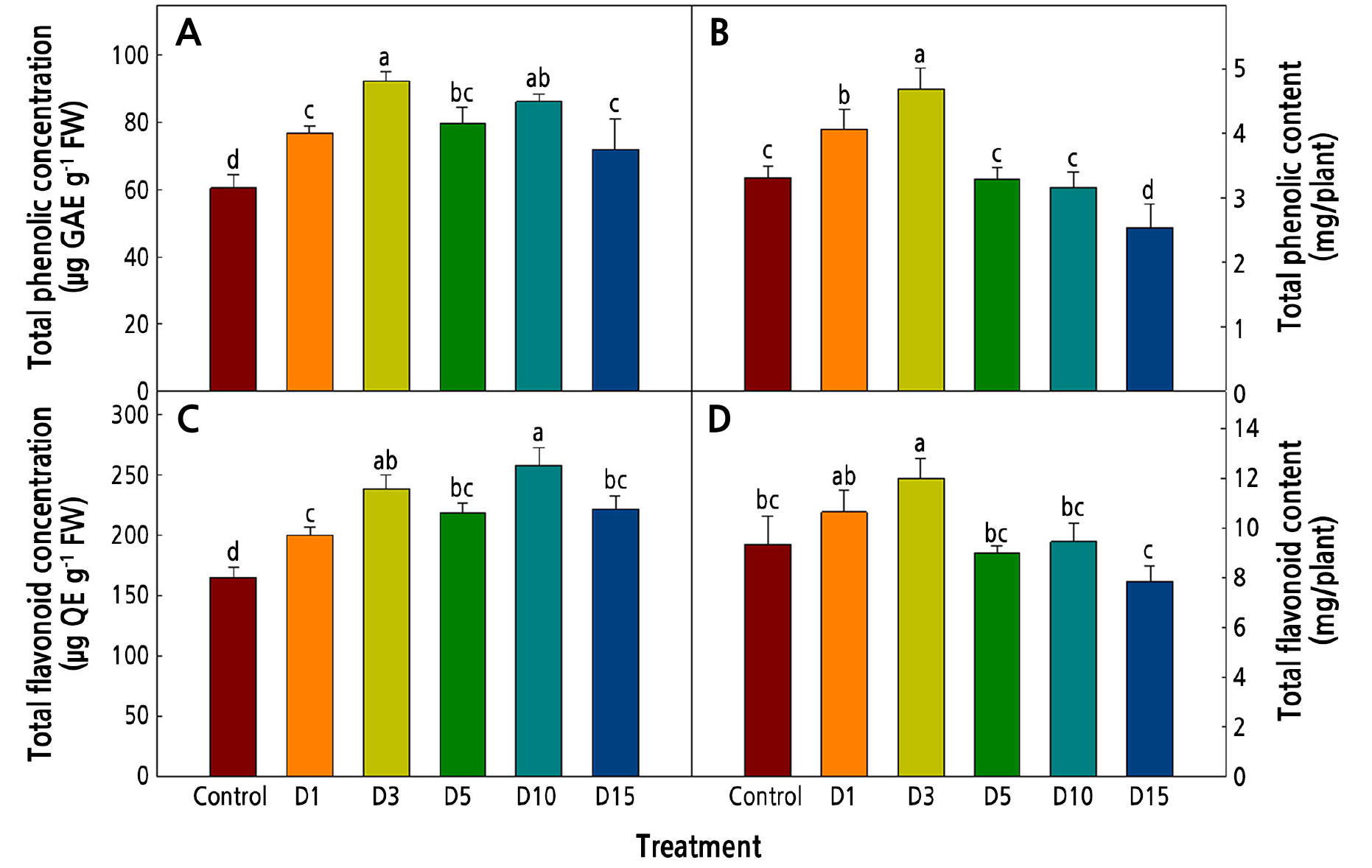