Changes in Growth and Anthocyanin Content of Brassica juncea L. affected by Light Intensity and Photoperiod in Plant Factory with Artificial Lighting

A PFAL is an automated agricultural system that can produce crops in planned production, as with industrial products, regardless of season and location by artificially controlling an environment (light, temperature, CO2, and nutrition) suitable for plant production in a closed facility (Takatsuji, 2008). PFAL can cultivate uniform, high-quality crops with increased yields and phytochemicals compared to open-field cultivation products by establishing an optimal cultivation environment (Goto, 2012). In addition, PFAL has several advantages, such as producing uniform plants, higher annual yield, saving resources, and short production cycles (Heo et al., 2012). Therefore, many studies have been conducted on the commercial use of PFAL, which are widely used for academic purposes (Kim et al., 2021).

For the precise control of the environment, various artificial light sources are used in PFAL. These include high- pressure sodium lamps, metal halide lamps, fluorescent lamps, and light-emitting diodes (LEDs) (Park et al., 2012; Kim et al., 2021). Among them, LEDs are the most studied and used because they can light of various wavelengths, emit less heat that can damage plants, and save installation space owing to their small size (Lee et al., 2015; Bae et al., 2017; Kim et al., 2021). LEDs also have a long lifespan, high light efficiency, and low power consumption; therefore, they are commonly used in PFAL as artificial light sources (Choi et al., 2014). However, even if LEDs are used, artificial light sources still incur the highest cost in the operation of PFAL (Cha et al., 2012). Therefore, it is important to determine an appropriate light intensity and photoperiod for plant growth to improve the economic efficiency of PFAL and its products.

Brassica juncea L. (red mustard), along with lettuce and pak choi, is one of the major leafy vegetables consumed in Korea (Lee et al., 2012). Red mustard is a suitable crop for PFAL because of its short growth period, plant height, and wide edible area (Lee et al., 2010). In addition, red mustard has been used worldwide as a model plant suitable for research on the response of plants to light in facilities (Dougher and Bugbee, 2001; Kim et al., 2004; Park et al., 2012). However, studies on photoperiod and light intensity effects on red mustard in a PFAL are insufficient.

Therefore, this study was conducted to investigate the effects of light intensity and photoperiod on the growth and anthocyanin content of red mustard in a PFAL.

Red mustard (Brassica juncea L., Danong Co. Ltd., Namyangju, Korea) was sown on a urethane sponge. After sowing, germination, and seedling nurseries were carried out in a PFAL with RGB LEDs (red:green:blue = 7:1:2, ES LEDs Co. Ltd., Seoul, Korea) at a temperature of 20 ± 1°C, light intensity of 180 ± 10 µmol·m-2·s-1 photosynthetic photon flux density (PPFD), and photoperiod 12/12 (light/dark) for 9 days. Thereafter, a similar cultivation environment was maintained; however, the light intensity was 150 or 300 µmol·m-2·s-1 PPFD, the photoperiod was 8/16, 12/12, and 16/8 (light/dark), and the daily light integral (DLI) of each treatment was calculated using the formula (LEDTonic, 2019) below (Table 1).

Light intensity, photoperiod, and daily light integral (DLI) value of each treatment in the experiment

The photosynthetic rate was measured from the growth point of the fifth fully developed using a portable photosynthetic meter (CIRAS-3, PP Systems International Inc., MA, USA). Measurement conditions were controlled at an air volume of 150 mL·min-1, a leaf area of 4.5 mm2, a leaf temperature of 25°C, a CO2 concentration of 500 µmol·mol-1, and light intensities of 150 and 300 µmol·m-2·s-1 PPFD.

Red mustard leaves were frozen in liquid nitrogen and stored at –72°C (NF140SF, Nihon Freezer Co. Ltd., Japan) until analysis. To determine the total anthocyanin content, 2 g of sample was collected from the second leaf at the growth point of the red mustard leaf, and 2 mL of a 95% ethanol and 1.5 N HCl mixed at 85:15 (v/v) was added to a mortar and ground. After transferring 1 mL of the ground sample to a microtube, it was stored in the dark at 4°C for 24 h, and then centrifuged at 13,000 rpm for 20 min. The obtained 1 mL of supernatant was diluted. The total anthocyanin content was calculated by measuring the absorbance at 535 nm using a spectrophotometer (Libra S22, Biochrom Co., Ltd., UK) (Fuleki and Francis, 1968).

Growth characteristics of red mustard (Brassica juncea L.) as affected by different light intensities and photoperiods at 16 days after transplanting 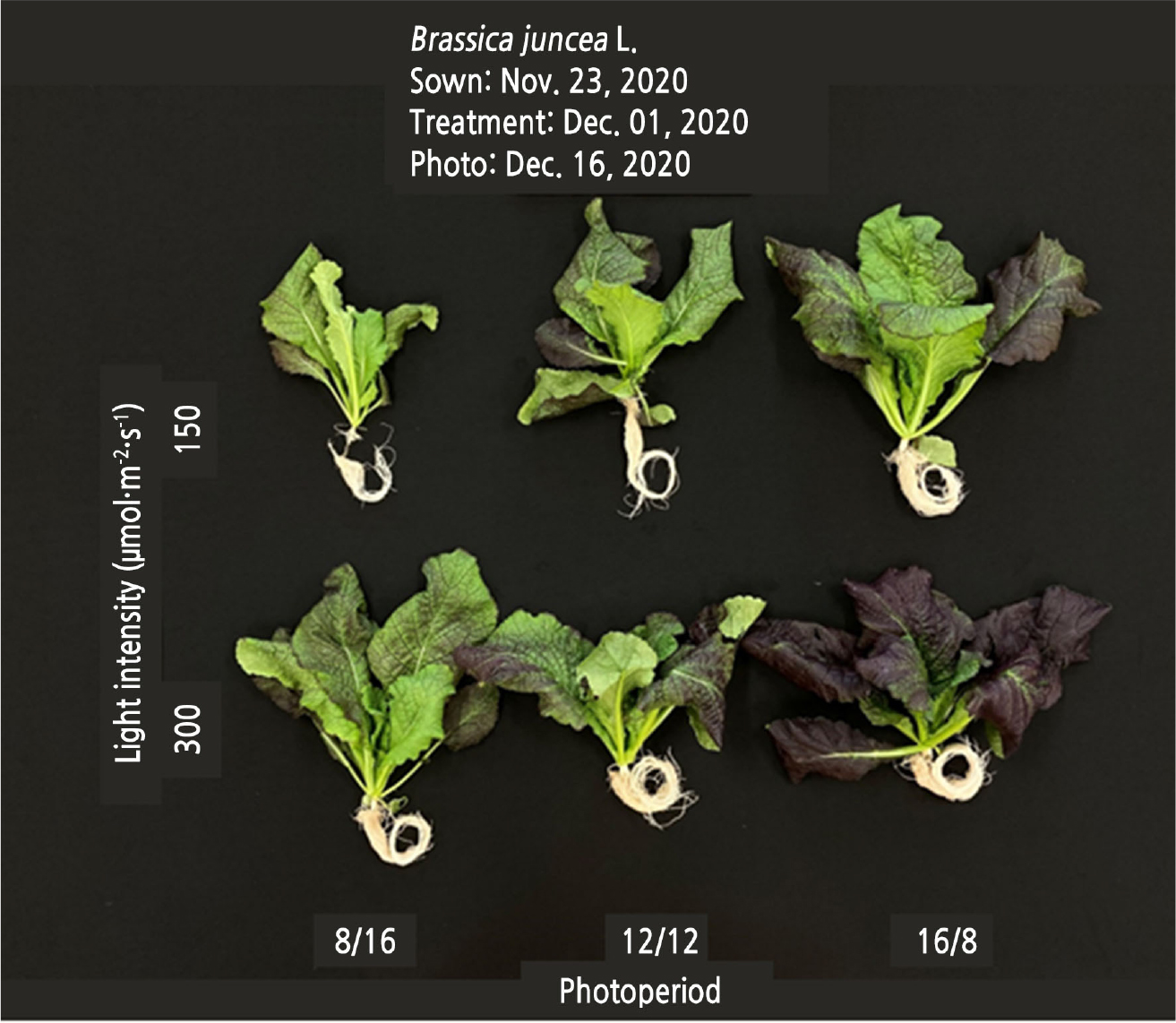 Growth of red mustard (Brassica juncea L.) as affected by different light intensities and photoperiods at 16 days after transplanting.

The L* (A) and a* (B) values of red mustard (Brassica juncea L.) as affected by different light intensities and photoperiods at 16 days after transplanting. Vertical bars represent the standard deviation of the mean (n = 9). Different letters in the same column indicate significant differences based on Duncan’s multiple range test (p < 0.05). A higher L* value indicates a brighter color, and a positive a* value indicates a red color.

Photosynthetic rate (A) and SPAD (B) of red mustard (Brassica juncea L.) as affected by light intensities and photoperiods at 16 days after transplanting. Vertical bars represent the standard deviation of the mean (n = 6). Different letters in the same column indicate significant differences based on Duncan’s multiple range test (p < 0.05). 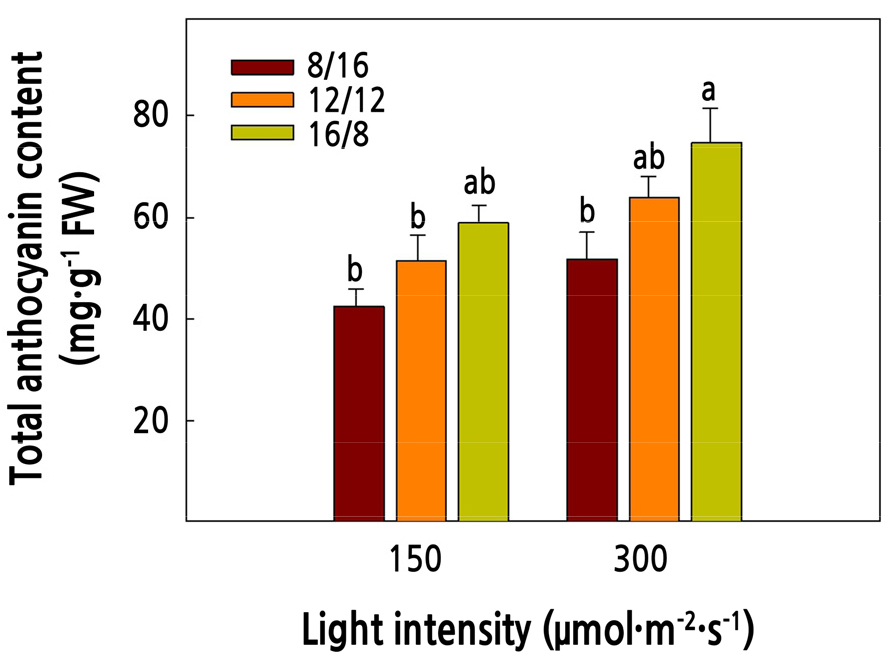 The DLI is the level of photosynthetically active radiation delivered over 24 h (Faust et al., 2005). As the DLI increased, the fresh weight and the total anthocyanin content showed a positive correlation (Fig. 5). The 150 µmol·m-2·s-1 with 16/8 photoperiod (low light intensity with long photoperiod) and 300 µmol·m-2·s-1 with 8/16 photoperiod (high light intensity with short photoperiod) had the same DLI, and fresh weight and total anthocyanin content showed no significant differences. He et al. (2020) reported that the quantum energy reaching photosystem II in plants under the same DLI conditions was similar. However, under the same DLI, the morphology and color can be different according to the change of photoperiod and light intensity. Kitaya et al. (1998) reported that at the same DLI, the longer photoperiod increased hypocotyl length and leaf area of ‘Summer-green’ lettuce. Kelly et al. (2020) reported that in ‘Rex’ and ‘Rouxai’ lettuce, there was no morphological change at the same DLI, but the color value was changed. In this study, at the same DLI, there is no difference in leaf area, fresh weight, and dry weight, but the color value and SPAD showed a difference (Table 2, Figs. 2 and 3B). Furthermore, DLI can act as an important indicator for establishing a strategy to control the operating cost of plant factory. The electricity cost has a large portion of the operating cost of a plant factory for using the light source (Kozai and Niu, 2019). Some countries, including Korea, the industrial electricity using the TOU (Time of usage) method, which electricity costs vary by season and time of day (Park et al., 2021). Therefore, by controlling the photoperiod while maintaining the same DLI, it is possible to save the electricity cost of the plant factory, and the results of this study can be used as an indicator to save operating costs in the production of plant factories of red mustard.

Relationships between shoot fresh weight (A) and total anthocyanin content (B) of red mustard (Brassica juncea L.) with the daily light integral 16 days after transplanting.