Endophytic and seed-borne microbial attacks represent major barriers leading to poor regeneration- powered micro-propagation of Cannabis sativa. Thus, a reliable sterile method during germination and in vitro plantlet preparation is important for the further successful micro-propagation of C. sativa plants. In the present study, we aim to develop a quick and efficient procedure for the preparation of pathogen-free plantlets using a hydrogen peroxide (H2O2) solution as a liquid germination medium. In this framework, all three phases, i.e., seed sterilization, germination, and early seedling development, were carried out in H2O2 solutions of varying concentrations (0, 1, 3, 5, and 10%). Among the different concentrations tested, the 1% H2O2 solution resulted in the fastest and the most successful germination for all tested genotypes of C. sativa seeds, in this case “Cheungsam,” “Cherry Blossom,” “Queen Dream,” and “Hot Blonde.” Higher concentrations of H2O2 (3, 5, and 10%) adversely affected the germination rate of C. sativa seeds compared to 0% or 1% H2O2. In addition, 5% and 10% H2O2 solutions significantly reduced seedling survival rates on MS media. Importantly, contamination rates of 88.4–96.7% were observed for C. sativa seedlings germinated with the 0% H2O2 solution and transferred to antibiotic-free MS media. However, a contamination rate of less than 4.0% was observed for seedlings prepared using 1% H2O2 as a germination medium. Moreover, the survival rates of seedlings germinated in 1% H2O2 were significantly higher than those of other seedlings. Our results suggest that a 1% H2O2 solution is a useful liquid germination medium for C. sativa seeds to enhance germination and survival rates while decreasing microbial contamination in antibiotic-free tissue culture media.

Cannabis sativa L. has long been valued as a source of traditional medicine and fiber. Recently, C. sativa plants are attracting relatively more attention as they represent the most viable source of phytocannabinoids, specifically C21 terpenophenolic or C22 for carboxylated metabolites (Appendino et al., 2008; Andre et al., 2016). Cannabidiol (CBD) and ∆9-tetrahydrocannabinol (∆9-THC) are the two most abundant phytocannabinoids in C. sativa plants. In addition, different minor cannabinoids such as cannabinol (CBN), cannabigerol (CBG), cannabichromene (CBC), tetrahydrocannabivarin (THCV), cannabidivarin (CBDV), cannabinodiol (CBND), and cannabinidiol (CBDL) are present in C. sativa. They may also have some medical benefits. In humans, phytocannabinoids are known predominantly to target cannabinoid receptor types 1 (CB1) and 2 (CB2); however, recent studies have suggested that phytocannabinoids have multiple targets to exert various in vivo activities (Yeasmin and Choi, 2020). Increasing reports suggest that cannabinoids are promising tonic, analgesic, antipyretic, antiemetic, anti-inflammatory, anti-epileptic, and anticancer agents (Salami et al., 2020; Yeasmin and Choi, 2020). Thus, a growing number of researchers and others now see C. sativa as a significant source of phytocannabinoids that can be used to treat multiple diseases in humans (Salami et al., 2020).

The primary step in a successful tissue culture experiment is the preparation of pathogen- or microorganism-free explants. Besides pathogenic microorganisms, plants and their seeds can have different microbial communities as endophytes without showing any disease symptoms or adversely affecting plants/seeds. Microbial contamination is a serious problem during in vitro tissue culturing due to the high nutrient availability in the almost universally used Murashige and Skoog basal medium or its variants (Cassells, 2012). Thus, a reliable sterile method during germination and in vitro healthy plantlet preparation are critical to ensure a successful tissue culture.

Recently, it has been reported that a 1% hydrogen peroxide (H2O2) solution can significantly enhance the germination rate of C. sativa seeds (Sorokin et al., 2021). H2O2 is not only a well-established antimicrobial agent (Weston, 2000) but is also a signaling molecule for many physiological, developmental, and stress-tolerance processes of plants (Wojtyla et al., 2016). H2O2 has strong oxidizing capacities (Ku et al., 2021). It can interact with most biomolecules, including nucleic acids, proteins, and lipids. Recent evidence has shown that the selective oxidation of proteins and mRNAs can act as a positive regulator of seed germination (Job et al., 2005; Oracz et al., 2007; Barba-Espín et al., 2011; Bazin et al., 2011). Verma et al. (2015) have postulated that H2O2 and ROS can facilitate oxidative modifications of storage proteins to increase the germination potential. In addition, H2O2 can interact with different phytohormones such as abscisic acid (ABA), zeatin-riboside (ZR), salicylic acid (SA), jasmonic acid (JA), and indole acetic acid (IAA) believed to play an important role in signaling processes during development and stress responses (Petrov and Van Breusegem, 2012; Diaz-Vivancos et al., 2013). Better germination performance accompanied by an exogenous H2O2 application can decrease the levels of ABA and ZR in germinated pea seedlings (Barba-Espín et al., 2010; El-Maarouf-Bouteau et al., 2015). Taken together, these findings indicate that H2O2 can be used not only as an antimicrobial agent but also as a signaling molecule within the phytohormonal network involved in the germination process.

Based on these two positive attributes of H2O2 (as a germination inducer and an antimicrobial agent) and results of a previous report by Sorokin et al. (2021), different concentrations of H2O2 as a liquid germination medium against four different cultivars of C. sativa plants, in this case Cheungsam, Cherry Blossom, Queen Dream, and Hot Blonde, were tested in this study. As expected, 1% H2O2 significantly enhanced the seed germination rate while also significantly and drastically reducing contamination rates of all tested C. sativa seeds. Our findings together with previous reports provide a solid foundation for the preparation of contamination-free C. sativa seedlings for multiple uses, including for tissue culture studies.

Cannabis sativa L. seeds were purchased from blue forest farms (https://blueforestfarms.com/), specifically the Queen Dream, Cherry Blossom, and Hot Blonde varieties. Together with these three different CBD hemp cultivars, Cheungsam seeds were also used in this study. The Cheungsam variety was developed by the Rural Development Administration of the Republic of Korea.

Seeds were soaked overnight in different concentrations (0, 1, 3, 5, and 10% H2O2) of hydrogen peroxide solutions as liquid germination media. For the 0% H2O2 treatment, seeds were surface-sterilized with 70% ethanol for 3 min followed by 6% sodium hypochlorite for 5 min, after which the sterilized seeds were washed with distilled water. For the 1, 3, 5, and 10% H2O2 treatments, seeds were directly treated with the indicated concentrations of H2O2 solutions. With three experimental replicates, 20 seeds of the four different cultivars of C. sativa plants were submerged in different concentrations of H2O2 solutions at room temperature (RT) under a dark condition. The percentage of germinated seeds in each germination solution (appearance of the radicle was considered a germination event) was recorded. After one day, a fresh germination solution in each case was added after the removal of the old solution. Seeds were soaked in the same solution for three more days at room temperature (RT) again in the dark. The percentage of germinated seedlings was then recorded every day.

In vitro Development of Germinated Seedlings

Germinated seeds/seedlings were transferred with or without seed coats from the H2O2 solutions to Murashige and Skoog (MS) agar media to observe their growth. During the transfer, the germinated seeds/seedlings were poured together with the H2O2 solution from the tube into an empty Petri dish. These seedlings were then transferred to the MS media plates using sterilized forceps to remove excess H2O2 solution. Finally, these germinated seedlings/seeds were transferred to a growth chamber (24°C, 18 h light/6 h dark cycle, and light intensity of 200 µmol·m-2·sec-1) for two weeks to check for contamination and to confirm survival rates. For the preparation of the 1 L MS Media, 4.43 g of MS salt (including vitamins) and 20 g of sucrose were dissolved m in 1 L of double-distilled water by stirring using a magnetic stirrer. After adjusting the media pH to 5.7 with KOH, 8 g agar was added as a gelling agent. The media were then autoclaved at 121°C for 15 min.

The mean seed germination percentage in different liquid germination media, the contamination rate, and the survival percentage on MS media were calculated. Data are shown as the mean ± standard error (SE). Experiments were repeated three times with similar results. In each replicate, 60 seeds were used. All statistical analyses were carried out using the R (ver. 4.2.1) and R studio (ver. 3, Build 554) programs (RStudio Team, 2020). A one-way analysis of variance (ANOVA) was used to determine significant differences at p < 0.05 between the samples. For each significant variable, differences between the means were detected using Tukey's Honest Significant Difference (HSD) test. 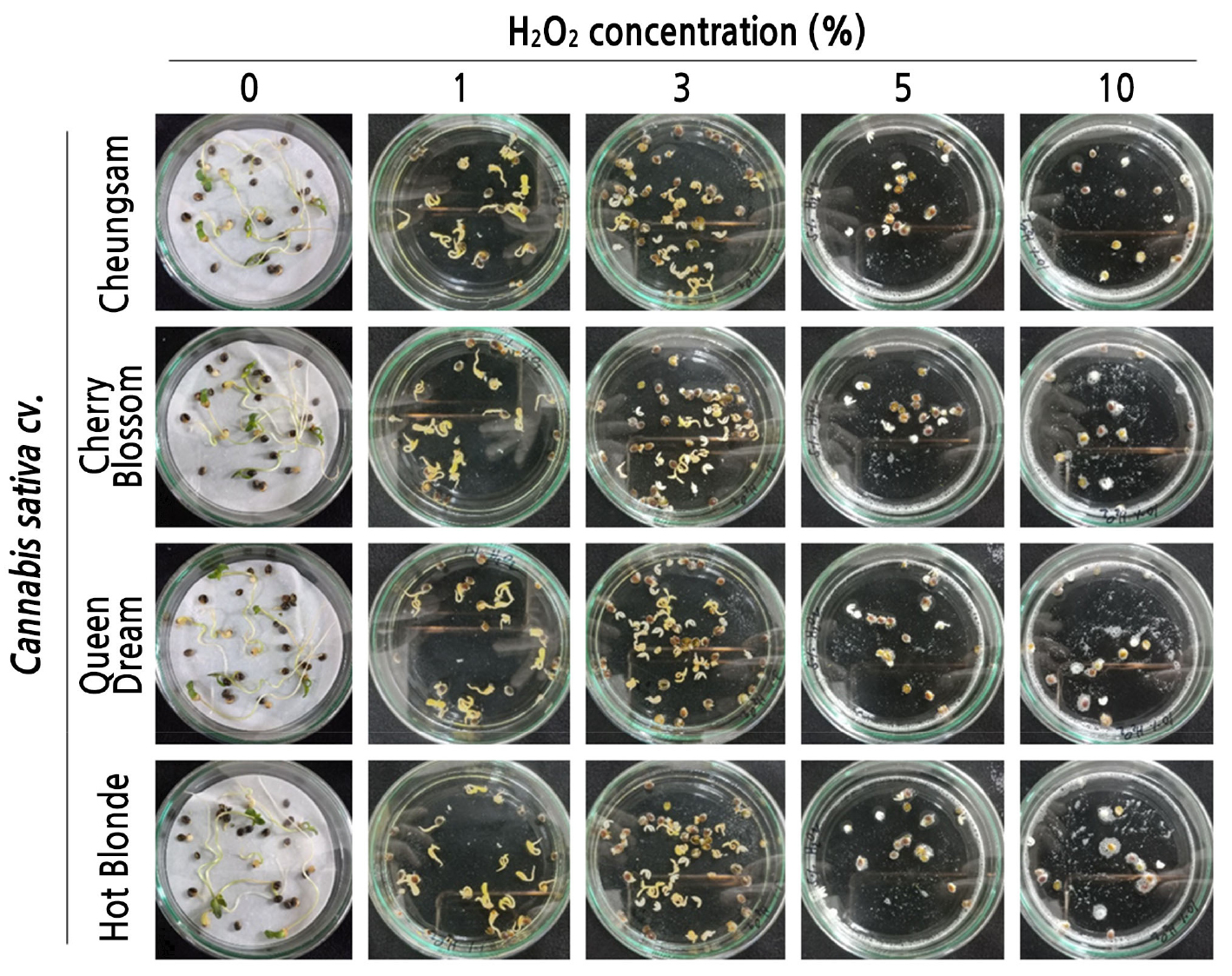 Recently, C. sativa plants have attracted increasing levels of attention due to their multipurpose utility, including a number of medicinal uses (Debnath et al., 2006; Altpeter et al., 2016; Niazian, 2019; Hall et al., 2019). Biotechnological studies such as those focusing on plant tissue cultures may find additional feasible uses for C. sativa plants. For example, gene editing using CRISPR-Cas9 enables the selective expression of cannabinoid biosynthesis genes, which can make it possible to produce specific sets of cannabinoids without psychotropic THC or with enriched levels of minor cannabinoids such as CBN, CBG, CBC, CBDV, CBND, and CBDL (Adhikary et al., 2021). The tissue culturing technique enables the aseptic propagation and generation of disease-free root stock with the safe production of useful cannabinoids and other secondary metabolites form C. sativa plants. In our experiments, 1% H2O2 acts best as liquid germination media, as it significantly enhances germination (Figs. 1 and 2) and survival rates (Fig. 5) while also reducing contamination rates (Figs. 3 and 4). Thus, our studies will provide the first step for those seeking a successful tissue culture technique of C. sativa plants, thus enabling aseptic propagation, the generation of disease-free root stock, and the genetic manipulation of C. sativa plants in further studies. 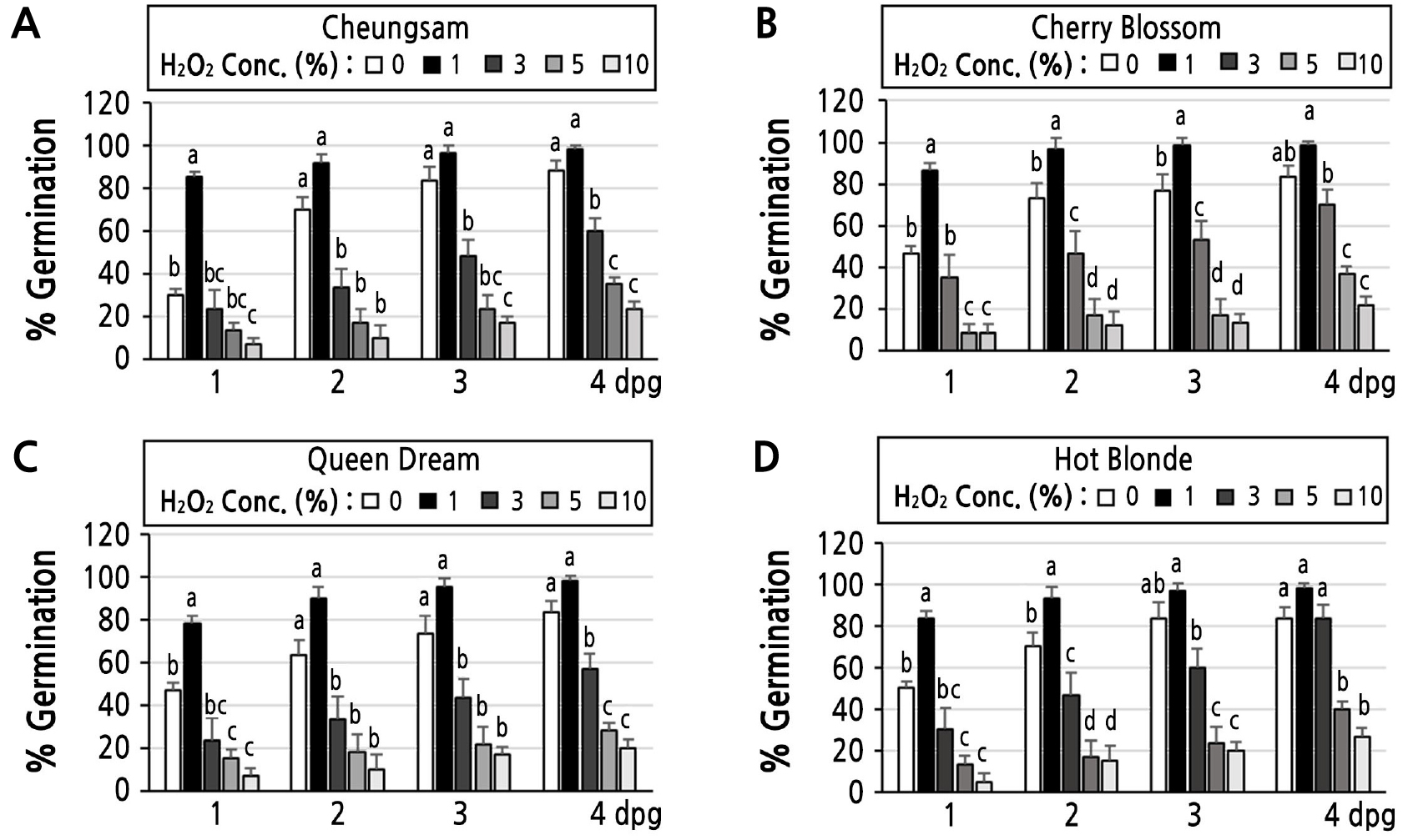 Effects of different concentrations of H2O2 on the germination rates of Cannabis sativa seeds: (A-D) Germination rates of Cheungsam (A), Cherry Blossom (B), Queen Dream (C), and Hot Blonde (D) seedlings treated with different concentrations (0, 1, 3, 5, and 10%) of H2O2 at 1, 2, 3, and 4 days post germination (dpg). Different letters represent groups with significant differences as determined by Tukey's HSD tests at p < 0.05 with a one-way ANOVA. Representative pictures of C. sativa seedlings germinated in different concentrations (0 and 1%) of H2O2.

Effects of different concentrations (0 and 1%) of H2O2 on the contamination rates of C. sativa seedlings. Different letters represent groups with significant differences as determined by Tukey's HSD tests at p < 0.05 with a one-way ANOVA.

Effects of different concentrations (0 and 1%) of H2O2 on the survival rates of C. sativa seedlings. Different letters represent groups with significant differences as determined by Tukey's HSD tests at p < 0.05 with a one-way ANOVA.

Although a higher disinfectant concentration can reduce contamination rates during the disinfection process, it can also reduce seed viability (Barampuram et al., 2014; Uhl et al., 2015; Mahaseth and Kuzminov, 2017; Hesami et al., 2019; Cuba-Díaz et al., 2020). As expected, H2O2 at concentrations higher than 1% reduced both germination (Figs. 1 and 2) and survival (Fig. 5) rates of C. sativa seeds despite its disinfection effect. This issue must be carefully addressed to avoid any adverse effects when an H2O2 solution is used as liquid germination media. H2O2 is a toxic reactive molecule. Thus, it is challenging clearly to distinguish between its beneficial (signaling) and deleterious (causing damage as a disinfectant) roles. Two distinct mechanisms for H2O2-driven seed germination have been proposed (Barba-Espín et al., 2011; Barba-Espín et al., 2012). First, exogenous H2O2 can induce a MAPK-signaling-dependent decrease in the ABA content in seeds. Second, H2O2 has direct or indirect negative effects on ABA transport from the cotyledon to the embryonic axis, resulting in a decrease of the ABA content in seeds (Wojtyla et al., 2016; Černý et al., 2018). However, little is known about ABA signaling in C. sativa plants and/or seeds. Thus, it will be interesting in the future to study whether the H2O2-induced increase of seed germination indeed depends on altered ABA signaling.

In this study, it was confirmed that 1% H2O2 can be used as a successful liquid germination medium, as previously reported. Four different cultivars of C. sativa seeds were tested for their germination, contamination, and survival rates in the presence of different concentrations of H2O2. This study provides information about the effective preparation aseptic C. sativa plants for further biotechnological studies on such topics as tissue culturing, cell suspension culturing, hairy root culturing, and other types.

This work was supported by the Promotion (NO: 1425151434) of Innovative Businesses for Regulation-Free Special Zones funded by the Ministry of SMEs and Startups (MSS), Republic of Korea.