To design a novel plug tray for ginseng seedling production, the effects of cell height and diameter, which determine root-zone volume, on growth and morphology of ginseng seedlings were investigated. Stratified seeds of the cultivar ‘Chunpoong’ were sown into containers with different cell heights (150, 200, 250, and 300 mm) with a diameter of 50 mm, denoted as H150, H200, H250, and H300, and different cell diameters (15, 20, 30, 50, and 75 mm) with a height of 200 mm, denoted as D15, D20, D30, D50, and D75, and filled with commercial growing media. Seedlings were then grown for 20 weeks in an ebb-and-flow subirrigation system installed in a plant factory with artificial light. Fresh and dry weights, length of roots, and leaf area increased as the cell height increased up to 300 mm. Length, fresh and dry weights of both shoots and roots, root diameter, and leaf area all increased as the cell diameter increased up to 30 mm. The root diameter was not significantly different between D30 and D75, though the roots had more space to expand. A further increase in cell height and diameter beyond H200 or D30 was not effective at increasing plant growth. The roots of ginseng seedlings were long and thick in the cells with a height of 200 mm and diameter of 30 mm. As a result, a novel plug tray was developed with a height and diameter of 200 mm and 30 mm, respectively, resulting in a root volume of 141.37 mL and planting density of 1,156 seedlings/m2 (9 cm2/plants).

Ginseng cultivation has been conducted mainly in the field and is associated with problems such as exposure to soil-borne diseases, shortage of the preparation field, and low labor efficiency (Kim et al., 1990; Suh et al., 2018). Direct seeding, a conventional method, has been preferred over transplanting mainly due to lower labor costs (Li et al., 2010). To solve some of these problems, research on ginseng seedling production using an efficient transplant production system that is well developed in the horticultural industry should be conducted.

Plug seedling production systems are well developed, especially for ornamental plants and vegetables (Nelson, 1991; Hartmann and Kester, 1963). In these types of systems, only a small rooting volume is required per plant to produce transplants with good quality in a short period. However, the method has not been fully developed for application to ginseng seedlings with a long taproot. A few studies have reported the effects of seeding depth (Proctor and Sullivan, 2013), planting density (Mo et al., 2015), media composition (Park et al., 2014), and nutrient solution concentration (Park et al., 2020) on seedling growth. Container design is one of the most crucial factors in plug seedling production systems as it determines the morphological and physiological characteristics of the seedlings, especially their root systems (Aphalo and Rikala, 2003; Dominguez-Lerena et al., 2006). However, no plug tray has been developed for ginseng seedling production, and the growth of ginseng in cultivation trays or vessels has seldom been studied.

Container size is the first thing to consider for producing transplants of good quality in an optimized space (Styer and Koranski, 1997). Cell diameter, one of the cell dimensions, determines planting density and number of cells per unit area (Vavrina et al., 1993). It also determines the amount of growing media or root volume with cell height, which affects the water content of media and amounts of water and nutrients absorbed by plants. Determining the cell dimensions is important in seedling production using plug trays because it is directly related to production cost (Dufault and Waters, 1985; Marsh and Paul, 1988). In addition, the cultivation period and root system should be considered to determine the container dimensions most suitable for production (Styer and Koranski, 1997; Gallegos et al., 2020). Ginseng seedlings, which have the characteristics of a long cultivation time and a deep, vertical tap root system with a small number of lateral roots, have some specific requirements regarding container dimensions. Therefore, to achieve the optimal growth of ginseng seedlings, especially that of their tap roots, it is necessary to develop a new type of cultivation container for ginseng seedling production systems.

In this study, we investigated the effects of cell height and diameter on the growth and morphology of ginseng seedlings using polyvinyl chloride (PVC) pipes in a plant factory with artificial light to determine the optimal cell dimensions and develop a cultivation vessel prototype for ginseng seedling production.

Measurements of Seedling Growth and Morphology

Physical Properties of the Root Medium

After harvest, four pipes from each treatment were used to measure the bulk density and porosity of the root medium according to the method suggested by NIAST (2000).

Bulk Density and Porosity as Affected by Cell Height and Diameter

The bulk density was highest in H300 and decreased as cell height decreased. Accordingly, the porosity was lowest in H300 and increased with decreased cell height (Table 1). On the other hand, no significant differences in bulk density and porosity were found among the cell diameter treatments (Table 2). These results demonstrate the compaction of the growing medium by weight, which increased with the height of the medium column. Bulk density and porosity affect a variety of soil characteristics, including water capacity and availability, aeration, and root penetrability, all of which can significantly impact root growth. Corti et al. (1998) reported that a high bulk density had the negative effect of reducing porosity and consequently reducing the air available for root respiration. However, the distribution of bulk density and porosity within the container should also be considered, especially under different cell heights. Milks et al. (1989) reported a water content gradient along the height of a 170-mm-tall pot, with water content ranging between 32% at the top and 59% at the bottom. As a result of the water content gradient, the air-filled porosity of the soil near the surface of a container is much higher than that at the bottom, and the difference over a 160-mm height can range from 4% to 28% depending on the type of soil (Evans et al., 2009). In this study, we watered with an interval of 12 days using EFS, which was a much longer interval than that for most vegetable crops. As the watering interval increases, the water content gradient of media between the surface and the bottom of media may become greater. Furthermore, changes in physical properties of media by gravity compression may also affect the capillary rise within the container. Therefore, the cell dimensions of plug trays should be considered along with growing medium to provide high efficiency of capillary rise and adequate water-holding capacity (Evans et al., 1992).

An increase in cell height promoted the root growth, including root length, diameter, and fresh and dry weights, of ginseng seedlings. Root length and fresh and dry weights were highly correlated with cell height, but root diameter showed no significant differences among the cell-height treatments (Fig. 1). In shoot growth, leaf area tended to increase with increasing cell height, but other parameters, such as shoot length, shoot fresh and dry weights showed no significant differences among the cell-height treatments (Table 3). In various woody plants, tap root and shoot growths have been found to increase with container height (Pemán et al., 2006; Chirino et al., 2008; Gallegos et al., 2020). 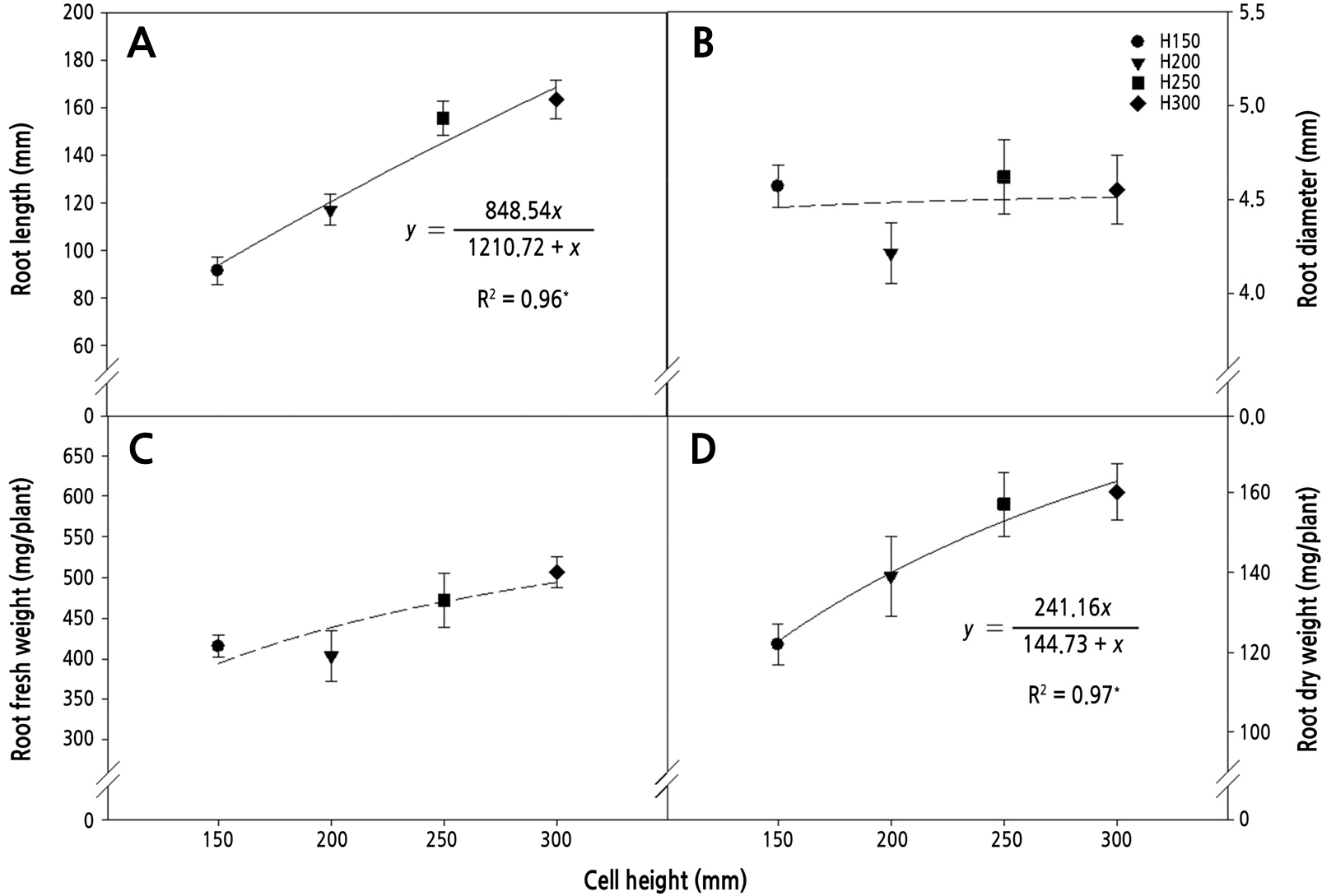 Shoot length, leaf area, and shoot fresh and dry weights of ginseng seedlings at 20 weeks after sowing in each cell-height treatment

The bulk density of the root media increased as cell height increased due to the compaction of the soil at the bottom of the cell. When roots have limited space to expand in a container that restricts their growth, they compete for available oxygen (Peterson et al., 1991). In previous studies of seedling production, the roots of barley (Goss, 1977) and broccoli (Montagu et al., 2001) showed compensatory growth in soil in which the main axes were mechanically compacted. Furthermore, the root growth of ginseng seedlings has been found to show a decreasing trend with increasing soil compaction (Roy et al., 2008), consistent with the finding of decreased yield in plants grown under low soil porosity (Lee et al., 1995). 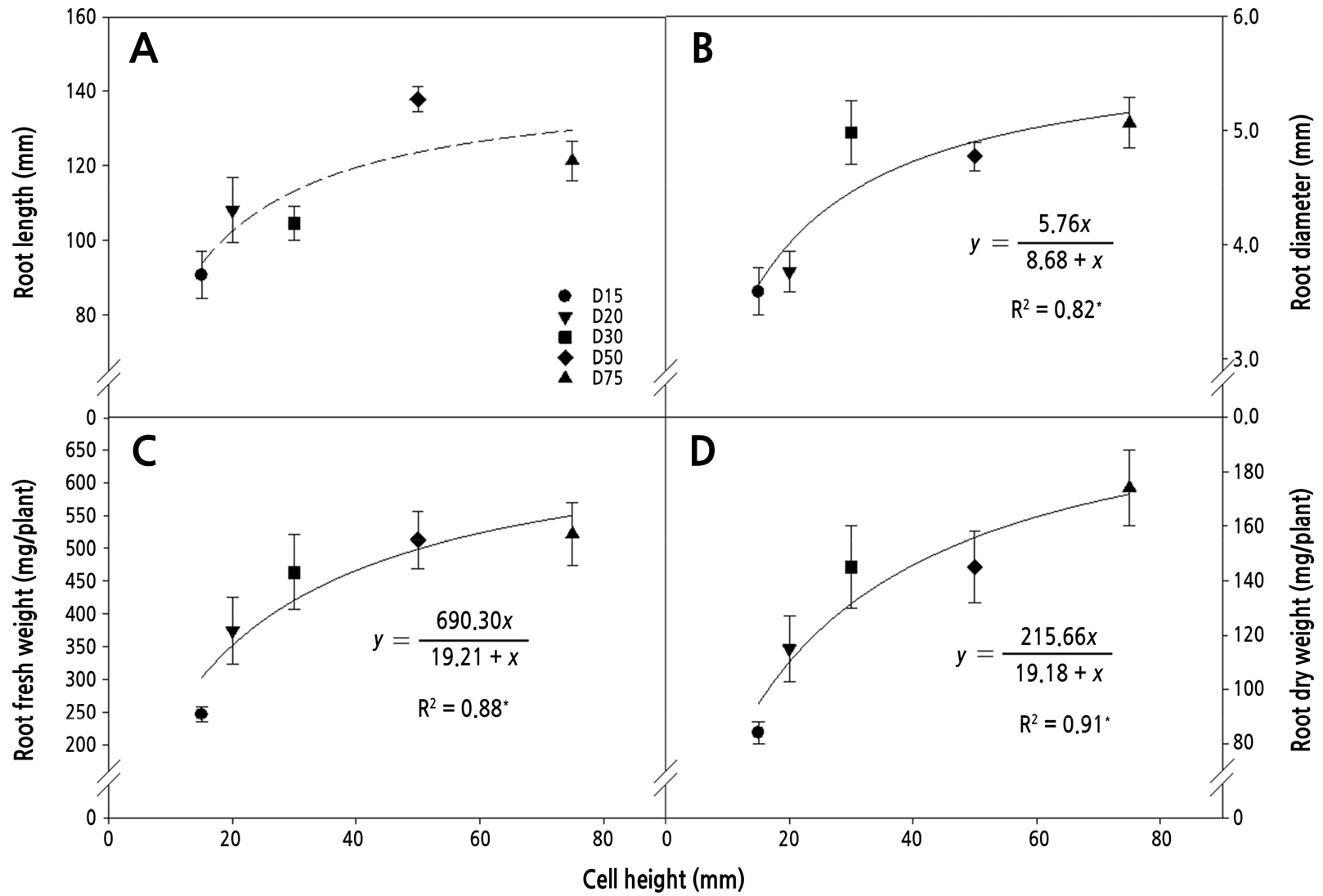 Shoot length, leaf area, and shoot fresh and dry weights of ginseng seedlings at 20 weeks after sowing in each cell-diameter treatment

Ginseng seedlings grown in the deeper and wider cells had higher root growth and weight, leaf area, and shoot growth than those grown in smaller cells. In general, as container size increases, plant leaf area, shoot fresh weight, and root fresh weight increase (Cantliffe, 1993). Larger and longer roots allow for faster and deeper root system development after transplanting, which can lead to rapid plant growth (Grossnickle, 2005). For this reason, the initial size of a seedling may have important consequences for the ultimate size of the adult plant (Roach, 1987). However, in seedling production, the use of small containers, allowing the production of more plants in less production space, may be beneficial (Vavrina et al., 1993). Therefore, to reduce the cost of seedling production, it is necessary to identify the optimal container size that allows the production of large seedlings for uniform root yields. Our results showed that the cell diameter of 30 mm was the most efficient in terms of promoting root and shoot growth and that further increases in cell diameter (up to 75 mm) provided little benefit (Fig. 2). Therefore, the cell diameter of 30 mm with the cell height of 200 mm can be considered to be the most suitable cell dimension for growing ginseng seedlings.

However, for the practical application, cell dimension also affects other aspects of the EFS system, such as irrigation efficiency and the weight of the irrigation water. As the cell height increases, the water level increases for uniform water distribution of the growing media, resulting in increased nutrient solution runoff and consequently decreasing irrigation efficiency. In addition, as the amount of water increases, the weight of the irrigation water increases, which can lead to an overweight EFS system. Therefore, our results showed optimal cell dimensions for growing ginseng seedlings, but for application, growers should consider other practical aspects and refer to the regression curve between the growth and cell dimensions (Figs. 1 and 2) to select the cell size that offers acceptable growth with reasonable cost.

This work was carried out with the support of “Cooperative Research Program for Agriculture Science & Technology Development (Project No. PJ0135262020)”, Rural Development Administration, Republic of Korea.