Hydrangeas (Hydrangea spp.) are popular ornamental plants worldwide (Kitamura et al., 2018) and are often used in floral displays because of the various colors and many flowers they produce (Kitamura et al., 2017; Lee and Lee, 2018). Hydrangeas originated in Asia. Most hydrangeas blossom in the summer and exist in various colors and sizes. Therefore, hydrangeas are frequently used as potted and garden plants (Schiappacasse et al., 2014), making them a popular woody plant species (Reed, 2004). The import and export plant quarantine statistics (2019) indicated that most hydrangea is exported and imported as cut flowers, and imported as the cutting and seedling for cultivation (QIA, 2020). Potted hydrangea distributed throughout Korea are mostly grown domestically (Lee, 2016). Potted flowers can be preserved and may continue to grow during storage and transport. They are shipped as whole plants with the substrate, which can lead to logistic difficulties due to their volume and weight (Yeh and Chiang, 2001). Potted flowers are subjected to increased stress due to exposure to ethylene gas during transport (Jones, 2002). Additionally, potted flowers that require a high amount of moisture are particularly vulnerable to the environmental variations to which they are exposed during distribution and use. Thus, the ornamental value of these flowers can be reduced due to ethylene gases or water stress (Kim and van Iersel, 2011). Evidence in the literature describes the effect of ethylene on the development of water stress response. Water stress increases the concentration of ethylene precursor in the xylem and root of potted flowers (Gómez-Cadenas et al., 1996). Movement of the immediate precursor of ethylene via the xylem to watered plants also inhibits leaf growth, suggesting that ethylene plays an important role in the regulation of leaf growth, such as dry soil (Davies et al., 2005). Therefore, studies have focused on generating ethylene and preventing water loss during the distribution of potted kalanchoe (Serek and Reid, 2000; Son et al., 2002), roses (Buanong et al., 2005), salvia (Kim and van Iersel, 2011), Phalaenopsis spp. (Jeon et al., 2019), and geranium (Oh and Runkle, 2009) in countries including South Korea. Furthermore, an ongoing study is investigating sustainable value chains, aiming to reduce the degradation of quality in potted flowers from production to distribution (Havardi-Burger et al., 2020). Despite increasing consumer demand, few studies have focused on the post-production management of potted hydrangea, with the majority of active studies focusing on the cultivation, quality improvement, and post-harvest control methods of cut hydrangea (Lee et al., 2017; Nam et al., 2017; Lee and Lee, 2018; Lee et al., 2019).

Most available potted hydrangeas are of the Hortensia (Hydrangea macrophylla) type, which produce clusters of small fertile flowers in the center area surrounded by large sterile flowers, giving the appearance that the small flowers bloom (Kitamura et al., 2018). The most commonly displayed hydrangea organ is the sepal, and not the petals. As the leaves are longer and wider than those of other flowering shrub species, hydrangeas require large amounts of water (Uemachi and Nishio, 2005). More than 70% of transpiration occurs through the stomata of plants. Under water stress, stomatal closing and opening effectively control water use efficiency and prevent dehydration (Kim et al., 2016). Sepal stomatal opening during market distribution may enable the entry of pathogens and microbes, resulting in a loss of quality (e.g., tissue browning and necrosis) (Kitamura et al., 2017). Therefore, our study sought to establish a method for inhibiting transpiration and extending the shelf life of potted hydrangea during shipment and transport via the regulation of stomatal closing and opening.

‘Speedy Red’ potted hydrangeas with at least four solitary branches per pot (approximately 45 cm in height and 54 cm wide) were purchased from a farm located in Yongin, Gyeonggi-do, Korea, in April 2019. The plants were acclimated in a glass greenhouse at Dankook University, Cheonan, South Korea, for 2 weeks after purchase. The acclimation conditions were the same as the experimental conditions. When more than 80% of the sepals from two of four branches turned red, the plant was considered ready for marketing and treated with ABA. The spray treatments consisted of 50 mL ABA at concentrations of 0, 1,000, 2,000, and 2,500 mg·L-1 prepared with ABA powder (Sigma-Aldrich, USA). ABA at a concentration of > 98% was added to a small volume of 99.5% ethyl alcohol. The treatments were sprayed onto the surface of sepals and leaves in each pot at 10 a.m., and six replicates were performed per ABA spray treatment. The plants were fully irrigated before the experiment, and no irrigation was performed after ABA treatment. The experiment was performed in a greenhouse from April 17th to the 24th in 2019, and temperature, relative humidity, light intensity, and day length (light period) were 21.2 ± 3.1°C, 52.8 ± 2.8%, 176.4 ± 4.2 µmol·m-2·s-1 PPFD (mean ± SD), and 14 h, respectively.

Treatment effects were evaluated based on the shelf life of the potted plants, senescence parameters, changes in stomatal size during the day and night, leaf chlorophyll content, maximum quantum yield of PSII (Fv/Fm), NDVI, and SR. The symptoms of senescence in potted hydrangea were identified in a preliminary experiment and were classified as wilting (> 30% of all sepals) and color change (blue and brown discoloration; > 30% of all sepals) of the sepals and wilting (> 30% of all leaves) of leaves. Symptoms were examined and calculated as percentages of the replicates. The day on which a senescence parameter was observed, resulting in the loss of ornamental value to consumers, was determined as the end of the shelf life. Changes in stomatal size were evaluated using an optical microscope (CX 31, Olympus, Japan) at 400 × magnification with a stoma observation kit (SUMP, Kenis, Japan), with daily observations at 9 p.m. (night) and 9 a.m. (day). Then, the area of the stomatal opening was measured in a ‘+’ shape in micrometers and calculated as an elliptical area. The stomatal area under dark conditions (DSA) and light conditions (LSA) was calculated and used to calculate the change in stomatal size using the following equation:

Change in Stomatal Size between Day and Night 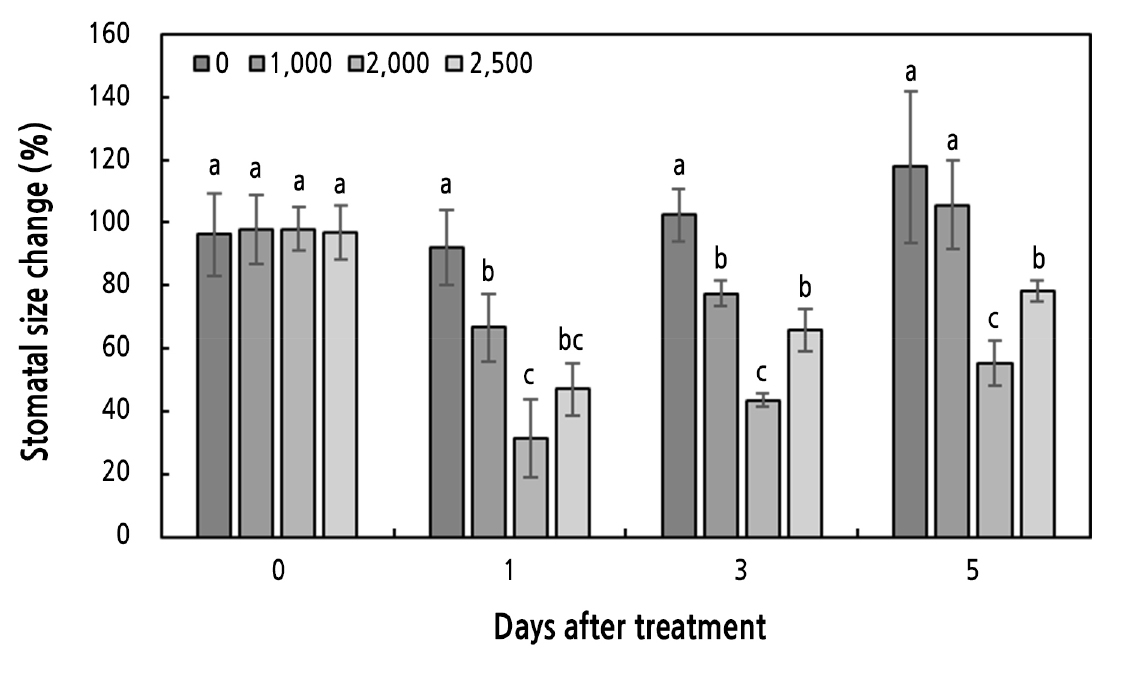 Particularly, 2,000 mg·L-1 ABA treatment resulted in the smallest change in stomatal size between light and dark conditions up to 5 days post-treatment compared to the other treatments. This was likely because the stomata remained closed even under light conditions, resulting in a smaller change in stomatal size relative to that under dark conditions (Fig. 3G). On day 5 post-treatment, there was a considerable change in stoma size between day and night in plants subjected to the control and the 1,000 mg·L-1 ABA spray treatment, and stomata remained open even under light conditions (Fig. 3E and 3F). Thus, it is possible that potted hydrangea plants under the control and 1,000 mg·L-1 ABA spray treatments rapidly reached the end of their shelf lives due to transpiration caused by persistent stomatal opening. In turn, a lack of moisture likely caused the sepals and leaves to wilt. 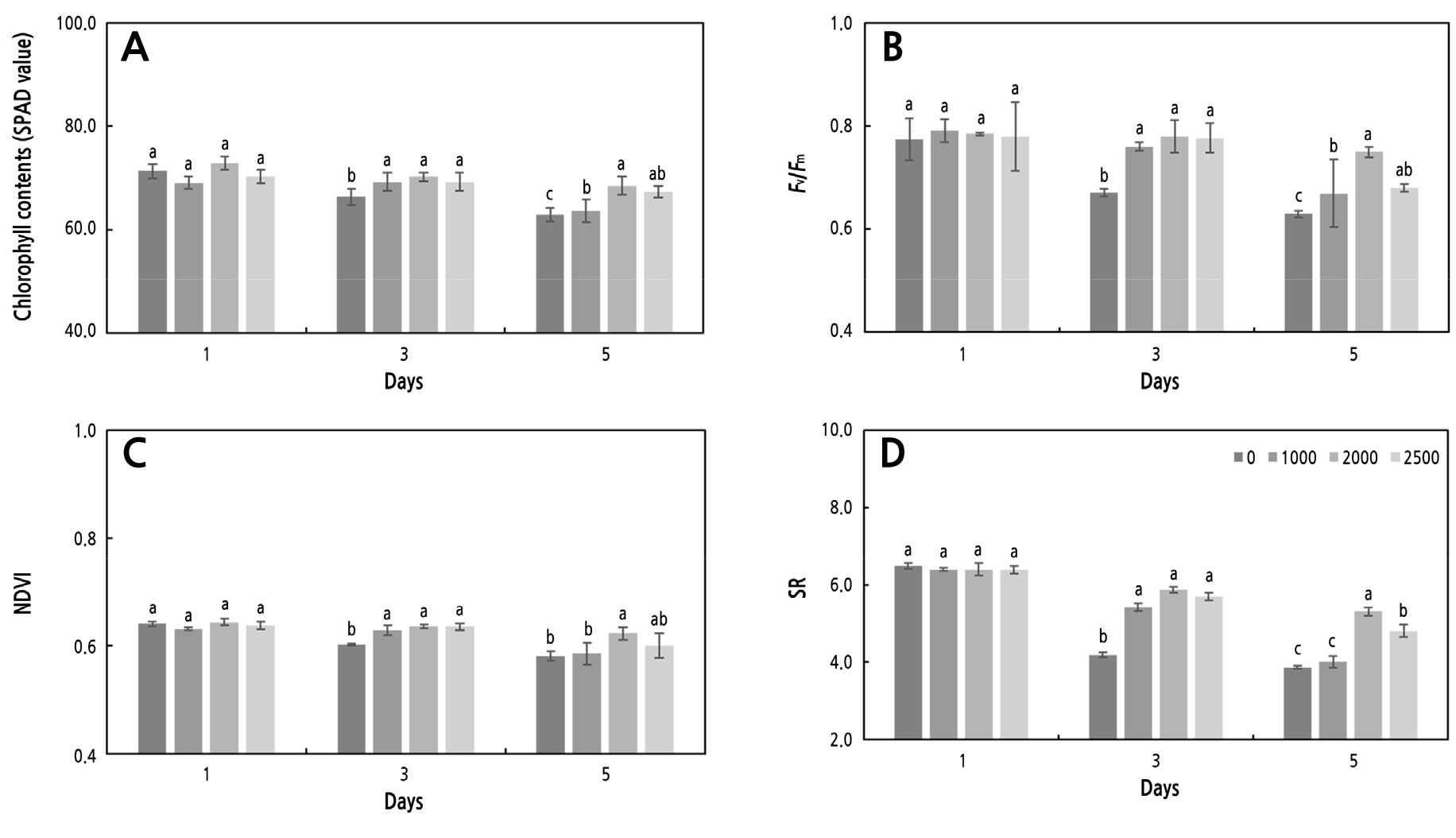 The correlation between quality factors was examined on day 5 post-treatment, which represented the end of the shelf life of control plants (Table 2). There was a negative correlation between shelf life and change in stomatal size (r = －0.545, p < 0.01), indicating that the shelf life of potted hydrangea subjected to ABA spray treatments should be extended as they experience less change in stomatal size. Kitamura et al. (2017) reported that the quality of sepals in hydrangeas was affected by stomatal water loss and that drought caused color changes, such as browning, along with wilting in hydrangea sepals; however, the specific mechanisms underlying these phenomena remain unknown. Kitamura and Ueno (2015) also found that inhibiting transpiration in hydrangeas could positively impact quality, although ABA treatment could accelerate senescence. Therefore, the results of this study indicated that ABA treatment may be needed to reduce water losses during the distribution of potted hydrangea and that a 2,000 mg·L-1 ABA spray treatment effectively controls stomatal closure in potted hydrangea (‘Speedy Red’), thereby preserving quality.

There was a strong negative correlation between SR and change in stomatal size (r = －0.829, p < 0.01) (Table 2). This was consistent with the finding that potted hydrangea plants had a lower Fv/Fm value than the normal range under drought stress and that the 2,000 mg·L-1 ABA spray treatment prevented water loss by maintaining stomatal closure more efficiently than the other treatments, thereby effectively maintaining plant quality. The NDVI and SR indices were positively correlated with shelf life (r = 0.549, p < 0.01; r = 0.832, p < 0.01) (Table 2). It was speculated that the shelf life of potted hydrangea would be prolonged as the NDVI and SR indices fell within the normal range. Particularly, there was a strong correlation between SR index and shelf life, indicating that SR may have potential for use as a predictive indicator of shelf life and quality in potted hydrangeas. In addition to those examined in this study (NDVI and SR), there are various vegetation indices (Payero et al., 2004) that have not been studied in potted hydrangea. Therefore, further studies should focus on alternative indices that may be used to predict physiological activity.

These results suggest that ABA spray treatment at optimal concentrations before shipment from farms to wholesalers or retail stores significantly enhances the quality and shelf life of water-stress-sensitive potted hydrangeas. Based on our observations in potted hydrangea (‘Speedy Red’), a 2,000 mg·L-1 ABA spray treatment should extend shelf life through effective stomatal closing, thus inhibiting transpiration and preserving quality. Moreover, this study demonstrates that Fv/Fm and vegetation indices have potential for monitoring the quality of potted hydrangea under water stress in a non-destructive manner, which may facilitate the evaluation of potted flower quality on site.

This research was financially supported by the Korea Institute of Planning and Evaluation for Technology in Food, Agriculture, and Forestry (grant number IPET 315041-05-5-HD030).