Zanthoxylum armatum is a perennial, deciduous shrub or small tree. Its fruit is green and dotted with slightly raised oil spots. Its roots, stems, fruits, and leaves can be used as raw materials for biomedicine, with antibacterial, antitumor, anti-inflammatory, analgesic, and anti-oxidative properties (Kumar et al., 2014; Thakur et al., 2016; Nooreen et al., 2017). It is distributed extensively throughout southwest China, and large-scale Z. armatum plantations currently occur in Sichuan Province, where they represent a significant source of economic revenue for farmers (Zhuo et al., 2020). The fruit pericarp is famous for its pungent and numbing flavor and is widely used as a seasoning for food (Li et al., 2020). Both Z. armatum and Z. bungeanum are commonly called Szechuan peppers, but they differ in biological characteristics and suitable growing areas; the former grows in low-altitude plains and is drought resistant and cold intolerant, while the latter grows in high-altitude areas and has both high cold and drought resistance (Xiang et al., 2016; Zhuo et al., 2020). In recent years, Z. armatum crops have often suffered from serious frost damage and low yields due to low temperatures. Improving the cold resistance of Z. armatum is therefore imperative for maintaining high yields.

Previous studies showed that reasonable combined water-fertilization significantly improved yield, quality, and winter cold resistance of cashew and honey citrus trees (Oliet et al., 2011; Andivia et al., 2012; Ahmad et al., 2021). Rikala and Repo (1997) found that a high level of fertilizer, applied as NPK (nitrogen-phosphorus-potassium) 11-4-25 from the beginning of July to the beginning of September, could produce the highest level of frost tolerance in Pinus sylvestris. Nitrogen application improved Eucalyptus globulus cold resistance during the growing season. Dehayes et al. (1989) reported that a moderate level of N fertilization improved Picea rubens cold tolerance, while higher levels decreased it, and that P had no effect, suggesting that a moderate water and fertilizer management program could improve the cold resistance of forest plants. Siddiqui et al. (2020) indicated that a moderate level of NPK has a positive impact on C. caudatus and O. stamineus phenolics, flavonoid compounds, and antioxidant activities.

However, only a few studies on the role of soil moisture in mediating cold tolerance in forest plantations, particularly in cold desert climate zones, have been published to date. Furthermore, no reported literature exists on the cold resistance of Z. armatum, and this hinders our capability for meeting the needs of current production practices. In this study, the leaves of Z. armatum potted seedlings were studied under an artificial simulation of low-temperature stress after receiving a specific water-fertilizer treatment by measuring the SOD, POD, and CAT enzymes activities and MDA content. The main objectives of this study were to verify the following hypotheses: (1) low-temperature stress can lead to physiological changes, such as lipid peroxidation, membrane damage, and an altered antioxidant system of Z. armatum. (2) Appropriate water and fertilizer rates can mitigate the damage of low-temperature stress and improve the cold tolerance of Z. armatum. Our study represents a theoretical reference for the selection of optimum water and fertilizer management practices for enhancing low-temperature resistance in Z. armatum.

An orthogonal design was used for the water and fertilizer treatments with the following four factors: field water capacity (FWC), urea (NH2CONH2), phosphorus pentoxide (P2O5), and potassium oxide (K2O). The soil moisture and fertilizer levels of each treatment are given in Table 1. Each treatment contained nine replicates, with one pot per replicate (one individual per pot). The applied fertilizer amount was calculated according to the pot area; the entire amount of fertilizer was applied once.

Four-factor, four-level orthogonal experimental design of the combination of water and fertilizer treatments

In mid-April 2016, the Z. armatum seedlings, which were about 10 cm high, were transplanted into pots. The pots were placed in a transparent plastic shelter (used to protect the seedlings from rain) and weighed daily to adjust the soil moisture to the correct level. The low-temperature treatments were conducted in mid-November of 2017. In each treatment, whole compound leaves at the same position in the upper part of each plant were selected and incubated in an artificial intelligence low-temperature incubator for the low-temperature treatments. The treatment temperatures were –9°C, –6°C, –3°C, 0°C, 5°C, 10°C, and 25°C. The leaves began in an incubator at 25°C and were then cooled down at a rate of 4°C·h-1, kept at the target temperature for 5 h, then the temperature was increased at the same rate. Upon reaching the temperature of 25°C, leaves were left to recover for 5 h and then the rest of protocol was continued.

The SOD, POD, and CAT activities, as well as the MDA content of the leaves, were measured with the nitroblue tetrazolium reduction (Giannopolitis and Ries, 1977), guaiacol colorimetric (Fu et al., 2014), ultraviolet absorption (Weydert and Cullen, 2010), and thiobarbituric acid (Velikova et al., 2000) methods, respectively.

All experiments in this study were repeated in triplicate. Statistical analysis (mean ± standard deviation) was performed and figures was created with Microsoft Excel 2007 and OriginPro 8.0, respectively. All data were analyzed by one-way analysis of variance (ANOVA) and the mean differences were compared using the least significant difference (LSD) test. ANOVA, correlation coefficients, and principal component analysis (PCA) were performed using SPSS 22.0 software. Surface diagram of each interaction between two factors was drawn after fitting the equation with MATLAB interpolation and regression. 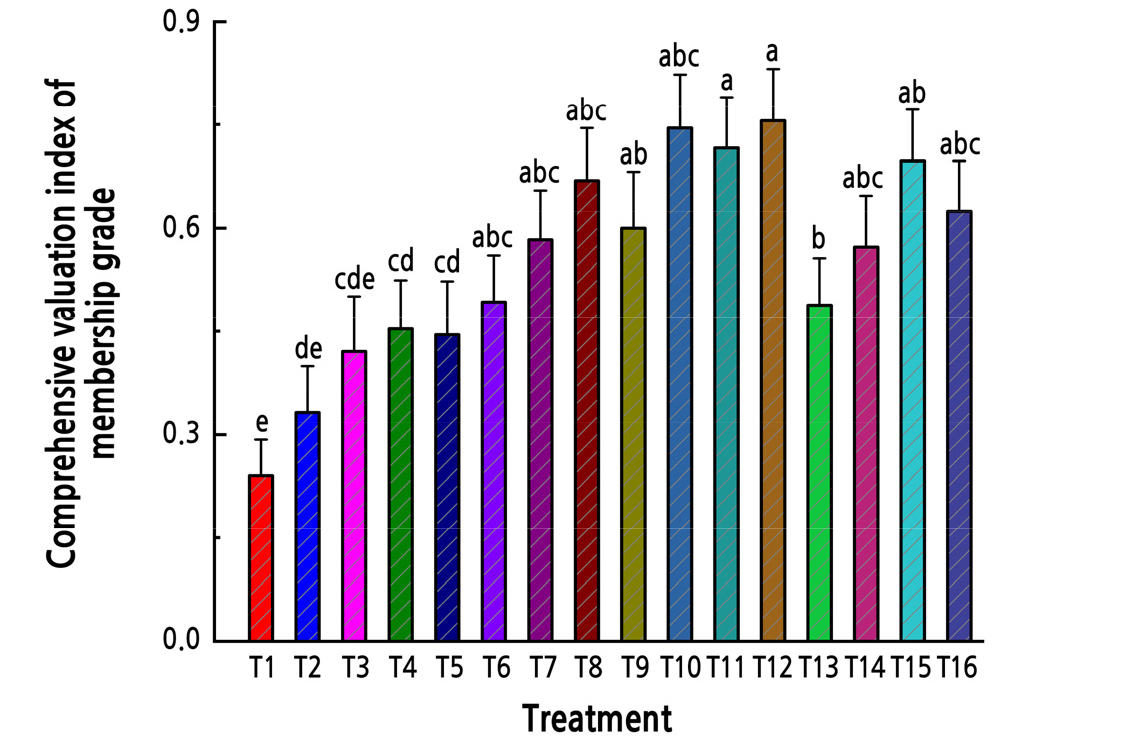 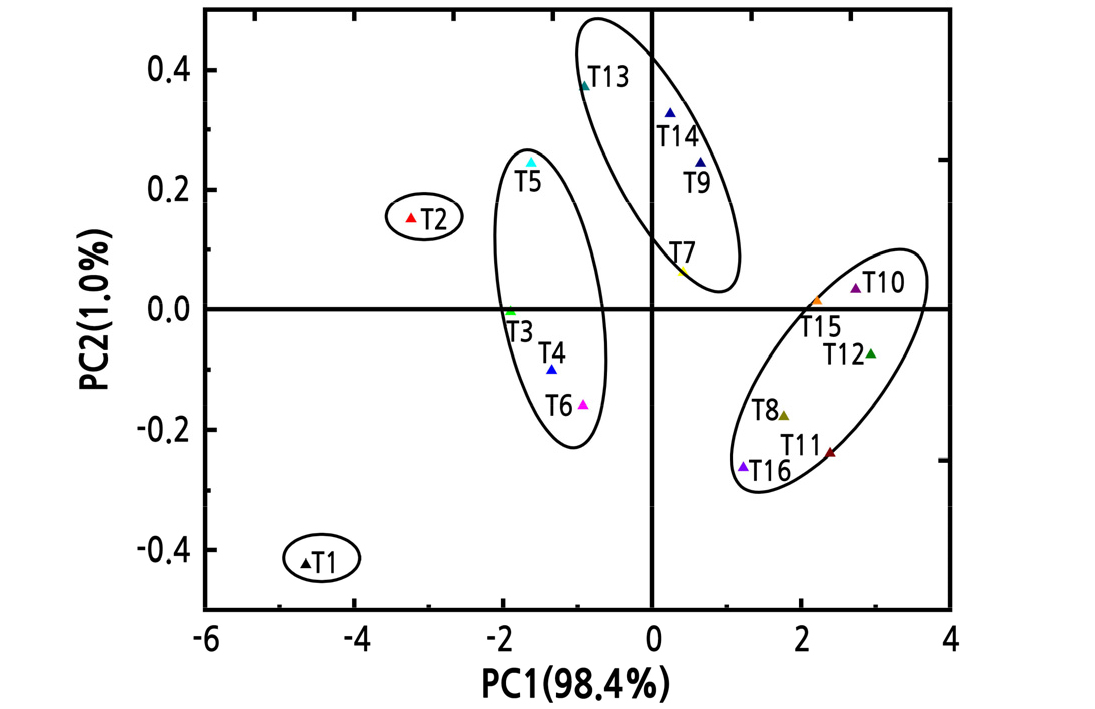 Principal component analysis (PCA) of the physiological characteristics of Z. armatum under different fertilization and water treatments. Each point represents a treatment and each ellipse represents a category. The proportion of the variance explained by each PC is shown in parentheses along each axis. 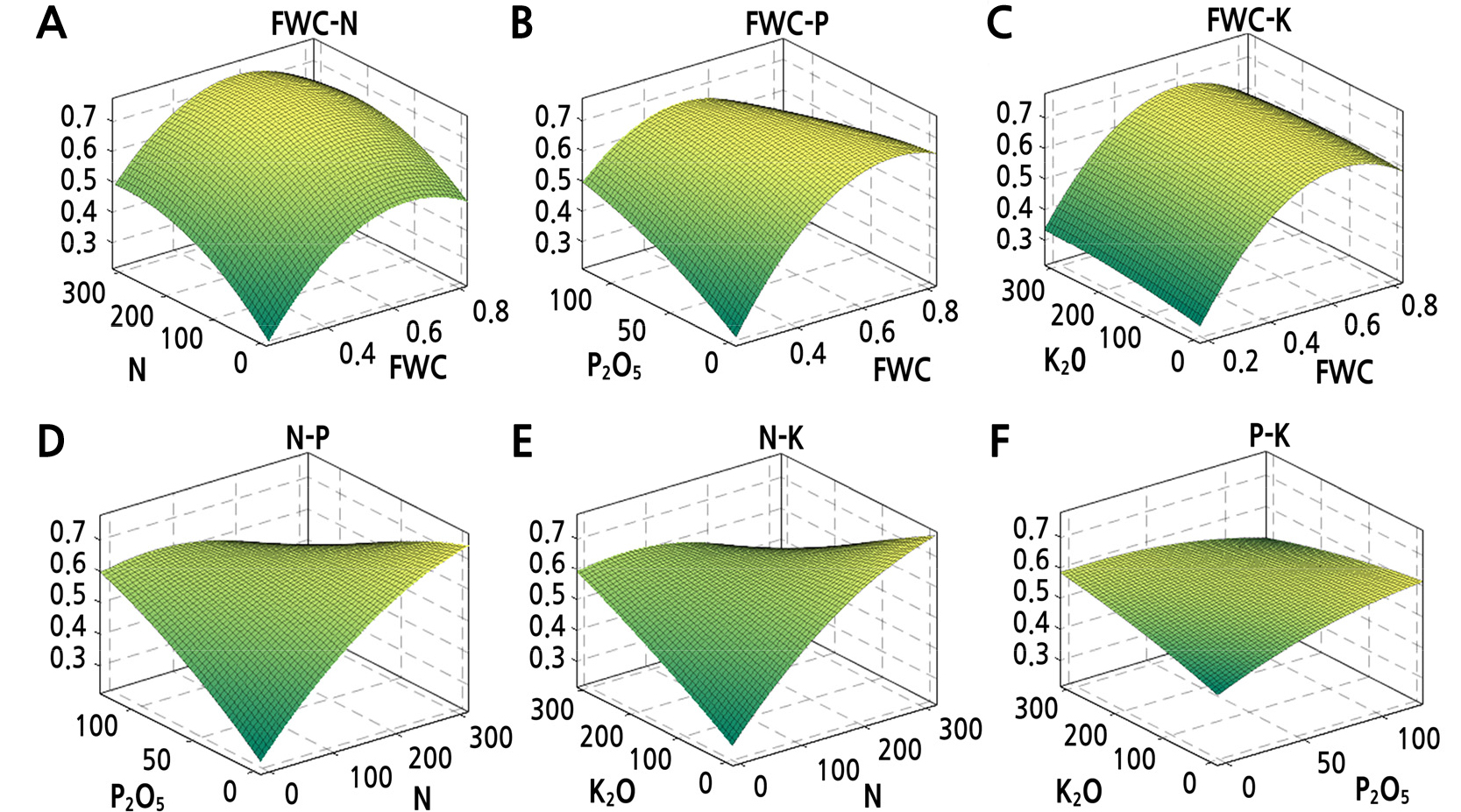 Low temperature is among the main abiotic stress factors that impact plant growth and development (Ritonga and Chen, 2020). Low temperature dysregulates active oxygen metabolism in plants, which leads to numerous cellular and physical changes, including oxidative stress and cell membrane lipid peroxidation; the damage caused by such stress may ultimately lead to cell death (Yu et al., 2020). The enzymes SOD, POD, and CAT are three important protective enzymes in a plant’s enzymatic defense system. SOD can catalyze the disproportionation of O-2 in ROS into H2O2 and O2, while CAT specifically removes H2O2. POD can catalyze the reaction of H2O2 with other substrates to consume H2O2. SOD, POD, and CAT coordinate with each other to effectively reduce or eliminate ROS, thus maintaining and promoting a stable and complete cell membrane structure (Sairam et al., 2011; Caverzan et al., 2012). The findings here showed that SOD, POD, and CAT activities, as well as MDA content, increased in Z. armatum leaves as temperature decreased. The activities of SOD, POD, and CAT started to decrease, while MAD content started to increase rapidly, when the temperature dropped to 0°C. These findings were similar to those of other studies (Wang et al., 2010; Liu et al., 2019; Ritonga and Chen, 2020), which showed that low-temperature stress upregulates antioxidant enzyme activity, enabling plants to tolerate cold stress (Guo et al., 2020; Ritonga and Chen, 2020). However, membrane damage will eventually occur if the degree of plant membrane lipid peroxidation increases to such an extent so as to be beyond the plants' self-regulating abilities (Zhang et al., 2015). This is supported by the fact that the generation and elimination of ROS and antioxidant enzyme activity were correlated with each other in Z. armatum seedlings under the low-temperature stress.

Fertilization, especially N, P, and K application, plays a vital role in plant growth and production, since these nutrients are involved in many biological processes and enhance biotic and abiotic stress tolerance (Deng et al., 2014). Current research shows that the application of N, P, and K increases the activities of SOD, POD, and CAT enzymes and decreases the content of MDA as temperature decreases, which indicates that fertilization could improve the cold resistance of Z. armatum. Previous studies have reported the benefits of improved mineral nutrition on enhancing cold tolerance in plants (Broschat, 2010). Fernández et al. (2007) observed that plants fertilized with more than 1.25% N application tolerated freezing better. Similarly, Bigras et al. (1996) observed that black spruce seedlings had a higher cold hardiness at higher NPK fertilization levels. Moreover, Heredia et al. (2014) observed that fertilized seedlings had greater frost tolerance than conventionally fertilized plants. These views are supported further by the present findings that Z. armatum seedlings treated with a high concentration of NPK were more resistant to cold under the same field water capacity conditions. Our results also agreed with those obtained by other researchers (Ihtisham et al., 2018). However, some researchers (Birchler et al., 2001) found that high N and K levels reduced frost hardiness, while P did not influence cold tolerance. The lack of consensus on this issue may be due to differences in tree species, nutrient requirements and balance, the amount of fertilizer required for plants as they age, or the different evaluation indicators (Oliet et al., 2011). It is also noteworthy that when the FWC is low, increased fertilization does not produce higher cold resistance; similarly, the results of the current study indirectly showed that soil moisture content also affects cold resistance in Z. armatum. This could be because highly fertilized plants are more vulnerable to water stress (Harvey and Van, 1999), and lower FWC exacerbates this phenomenon. Additionally, some research has shown that a FWC of 35–40% is more conducive to improving the overwintering ability of plants (Wang et al., 2017). In this sense, the appropriate FWC along with optimal fertilizer application is the key to improving the cold resistance of Z. armatum. Therefore, when Z. armatum suffers from temperature stress during planting, the appropriate FWC along with optimal fertilizer application can enhance the tolerance of Z. armatum to cold stress, alleviating the damage caused by low-temperature environments and helping Z. armatum successfully survive adversity. This view has been proven in many plants (Nie et al., 2015; Ihtisham et al., 2018; Toca et al., 2018). In addition, fertilization can also improve the accumulation of fresh and dry matter and promote plant growth and flower bud differentiation (Stanford et al., 2005; Zhou et al., 2020), which plays an important role in improving the yield of Z. armatum and increasing economic benefits.

In this study, the activities of four antioxidant enzymes related to cold resistance were investigated under 16 fertilizer and soil moisture conditions to explore the responsiveness mechanism associated with cold resistance in Z. armatum. Our results showed that low temperatures could significantly affect antioxidant enzyme activities in the leaves of Z. armatum seedlings. The SOD, POD, and CAT enzyme activities in Z. armatum leaves showed a trend of first increasing and then decreasing as the temperature declined. Furthermore, CEI was positively correlated with SOD, POD and CAT activities, but it was negatively correlated with MDA content. Fertilization significantly improved the cold resistance of Z. armatum. Moreover, a balanced nutrient application utilizing N, P, and K, and an appropriate FWC, are key to enhancing cold resistance. Appropriate application levels of field water capacity (59.6–63.4%), nitrogen (114.2–248.8 kg N/ha), phosphorus (40.1–108.6 kg P2O5/ha), and potassium (200.2–254.4 kg K2O/ha) fertilizers could enhance cold resistance in Z. armatum. Our study will benefit users that want to create effective water and fertilizer management programs in Z. armatum.

This work was supported by the National Key Research and Development Program of China (W G, 2018YFD1000605, 2020YFD1000700), the Forest and Bamboo Breeding Project of Sichuan Province for the Fifth Year Plan (W G, 2016NYZ0035, 2021YFYZ0032). Sichuan Science and Technology Fund Project (W-K H, 2020 YJ0130) and the funding bodies had no role in the experimental design, sample collection, data analysis and interpretation, and manuscript writing.