This study determined the optimal growing degree days (GDD) and cultivars of Kimchi cabbage (Brassica rapa L. ssp. pekinensis) for growth and yield during spring cultivation under shading condition. There were nine treatments, and the experiments were conducted with three GDD levels (899, 924, and 961) and three cultivars (‘Chungwang’, ‘Cheongna’, and ‘Cheongok’) under shading conditions. The process-based model of Kimchi cabbage was applied for growth and yield prediction using meteorological data regarding light, temperature, wind, precipitation, and humidity in several regions. The number of leaves of ‘Chungwang’ Kimchi cabbage was greater than that of ‘Cheongna’ and ‘Choengok’ at all planting times. Most of the growth parameters were highest in the delayed transplanting treatment than in the other transplanting times. ‘Chungwang’ Kimchi cabbage was less sensitive to high temperature during spring cultivation than the other cultivars. GDD 924 was the most optimal time to harvest under the shading condition. GDD 750-870 is considered an appropriate harvest time in the primary production regions during the spring cultivation season. If shading is performed in these regions, constant production may be possible, thus, alleviating damage from high temperature.

Growing degree days (GDD) is a measurement of daily temperature accumulation for predicting when a growth stage will occur, such as flowering and maturation. For example, GDD was used to estimate the yield of highland Kimchi cabbage (Kim et al., 2015), to predict the proper harvest time of Kimchi cabbage (Wi et al., 2018), and to estimate the growth and yields of peppers (Capsicum annuum L.) (Kim et al., 2018). Studies have been conducted to control the environment for reducing high temperature damages and physiological disorders in the open field and greenhouse. One method is to regulate radiation through shading. It has been reported that the growth of sedum (Sedum sarmentosum) (Lee et al., 2007), hooker chives (Allium hookeri) (Kim et al., 2017), and Cnidium officinale (Nam et al., 2020) under the shading conditions were greater than that under non-shading conditions in the open field. In addition, watermelon (Citrullus vulgaris) (Seong et al., 2014) and paprika (Capsicum annuum var. angulosum) (Ha et al., 2012) were grown in the greenhouse to avoid high temperatures in the summer. In Kimchi cabbage, shading improved head formation and controlled pests by lowering the temperature in the greenhouse (Park et al., 2019). However, there are few studies on shading in the cultivation of Kimchi cabbage.

Measurement of GDDs and Shading Treatment

GDD is a combination of daily maximum and minimum temperatures and base temperatures. Equation 1 is the formula for GDD (McMaster and Wilhelm, 1997). Tb equals 5°C (Park et al., 2019). 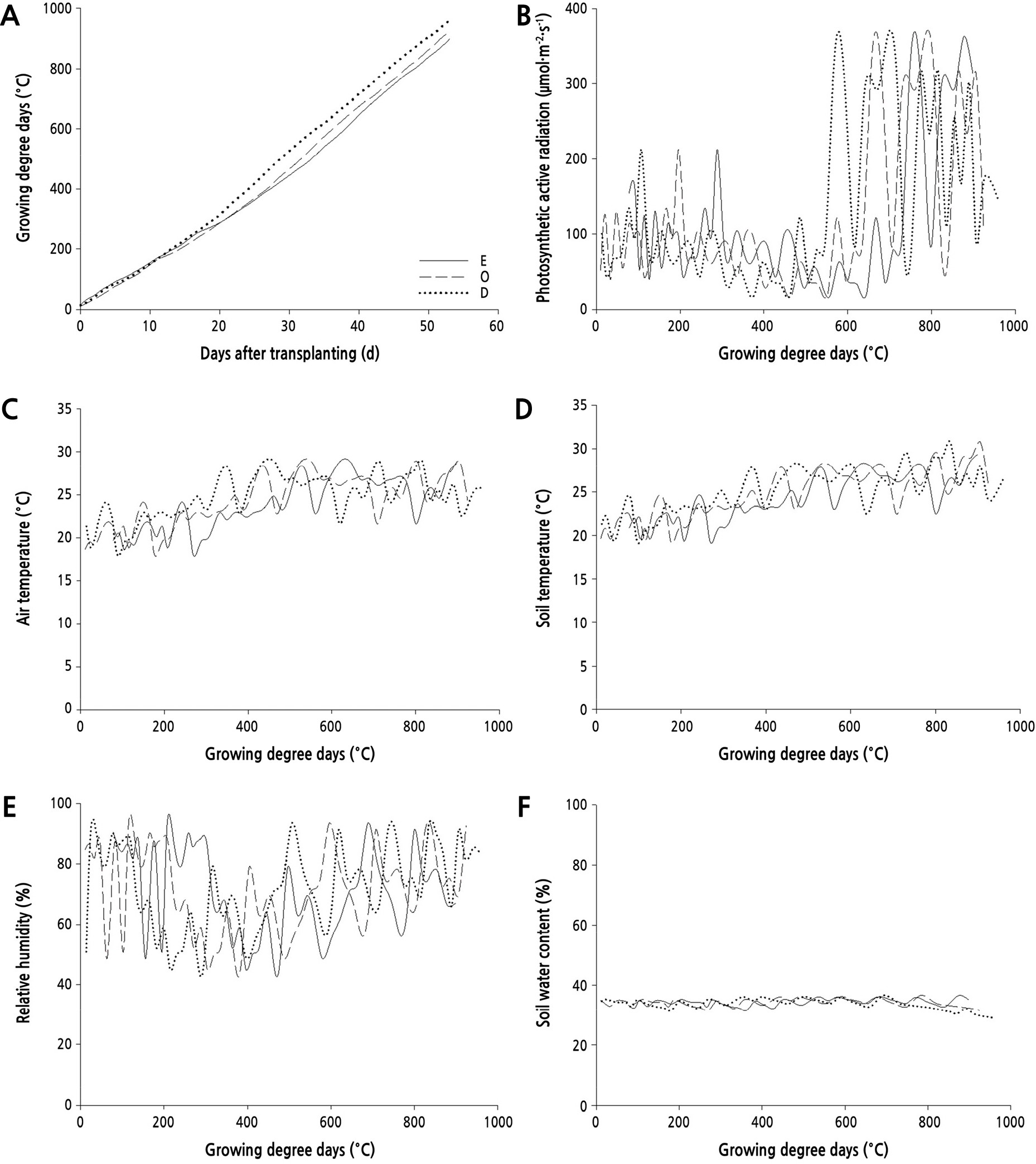 The environmental data in the greenhouse, including PAR, air temperature (AT), relative humidity (RH), soil temperature (ST), and soil water content (SWC), were measured using a quantum sensor (LI-190R, Campbell Scientific, UT, USA), an air temperature and relative humidity sensor (HMP155, VISALA, FIN), and soil temperature and soil water content sensor (CS650, Campbell Scientific, UT, USA) and stored once a day in a data logger (CR1000, Campbell Scientific, UT, USA). The environmental data are shown in Fig. 1. The average PAR under shading was 81.7, and 224.7 µmol·m-2·s-1 for the non-shading conditions. It was confirmed that the shading ratio of heat conservation covers was about 60%. Total PAR of early, optimal, and delayed transplanting time was 5846, 6688, and 7368 µmol·m-2·s-1, respectively (Fig. 1B). The AT and ST ranged from 18.3 to 28.9°C and 19.5 to 30.8°C, respectively (Fig. 1C and 1D). The average AT in the greenhouse was about 1°C higher than the outside temperature under shading and about 2°C higher under the non-shading conditions. The RH and SWC ranged from 45.0 to 93.5% and 28.9 to 36.7%, respectively (Fig. 1E and 1F).

Measurements were performed by selecting five individuals for each cultivar for transplanting (n = 5). For measurement of 11, 32, and 53 DAT, an individual was selected from one cultivar in each experimental group, and the same individual was repeatedly measured (n = 5).

Application of the Kimchi Cabbage Model

The process-based model of Kimchi cabbage developed by Moon et al. (2019) was applied for growth and yield prediction using meteorological data regarding light, temperature, wind, precipitation, and humidity. The meteorological data included the daily maximum and minimum temperature, RH, precipitation, sunshine duration, and wind speed. The daily maximum and minimum temperature, and RH stored in the data logger were applied for the model. The precipitation, sunshine duration, and wind speed data were from the Daegu Meteorological Observatory (35°87'N, 128°65'E) provided by the Korea Meteorological Administration (KMA). During the spring cultivation, the 13 primary production regions of Kimchi cabbage were Gangneung, Jeongseon, Jecheon, Mungyeong, Bonghwa, Seosan, Hongseong, Jeongeup, Gochang, Haenam, Jindo, Sancheong, and Gimhae. The meteorological data used for these regions were provided by the KMA. The simulation of the Kimchi cabbage model was conducted using the Anaconda3 program (Anaconda, Inc.) based on the Python and R programming language (Moon et al., 2019). The shoot fresh weight of Kimchi cabbage was predicted for each GDD treatment at 53 DAT. The predicted shoot fresh weight of Kimchi cabbage in Daegu (the experimental region) and the primary production regions were compared by simulating the model. The sunshine duration in the primary production regions was considered by the shading ratio (60%) of heat conservation covers in order to be similar to the conditions in the experimental region. Assuming that shading conditions were conducted in each region, the sunshine duration was 40% of the actual value to induce the result under shading conditions. The GDD and predicted shoot fresh weight were compared by maps using the ArcGIS program (Eris, CA, USA). 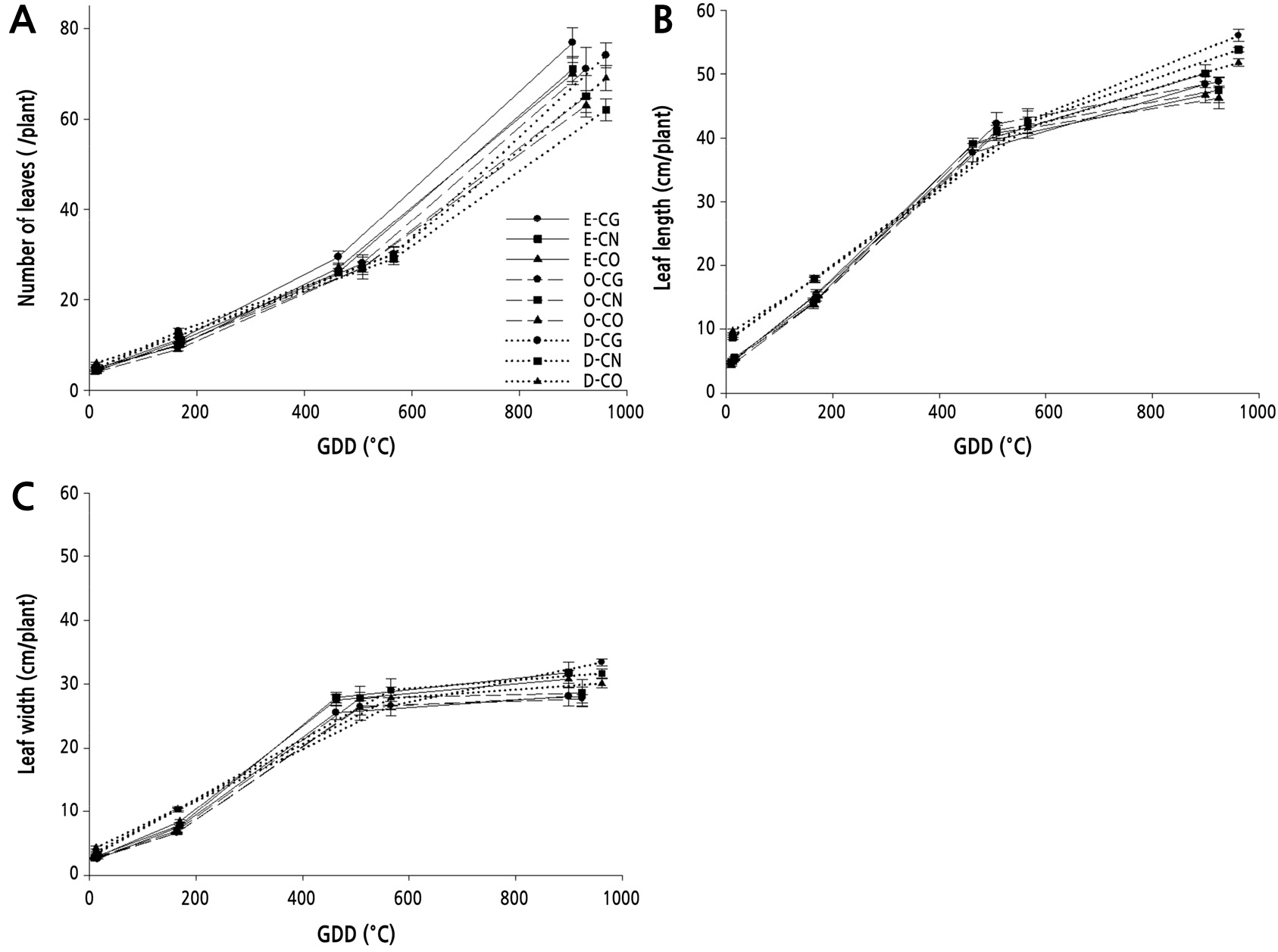 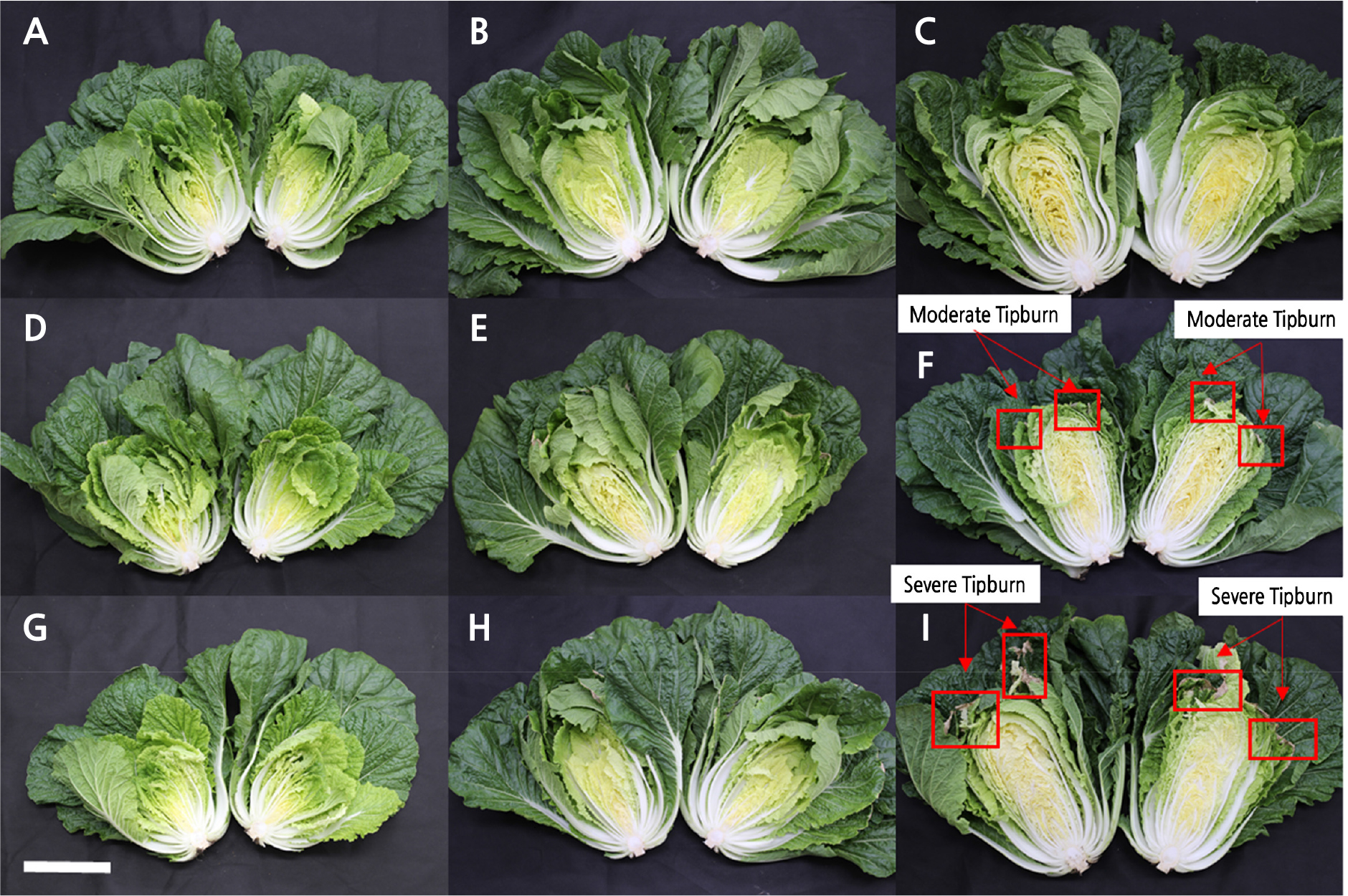 Kimchi cabbage is a leafy vegetable so the fresh weight is affected by the number of leaves and leaf area (Son et al., 2015). The results obtained agreed with Sammis and Wu (1989); they reported that for the effect of the accumulation of GDD with DAT, the amount of growth increases when in the range of normal temperature for growth. Other reports showed that early growth was fast under higher than average temperature, and the fresh weight was high up to 50 DAT (Son et al., 2015). Other studies showed that as the light intensity and cultivation period increased, the fresh weight increased (Son et al., 2018). Our study agreed with that of other research that treatment groups with high temperature and sufficient irrigation had higher yields than those grown at an optimal temperature (Lee et al., 2015). Kim et al. (2015) reported that GDDs and head weight had a negative correlation, but our study showed that as GDDs increased, head weight increased. Kim et al. (2007) showed that shading was required in the greenhouse in highland Kimchi cabbage. When the plant factory temperature condition was 23°C, the growth rate of Pak choi was faster than that at 20°C. As a result, the number of leaves and fresh weight increased, and the yield improved which allowed for a reduction in the cultivation period (Choi et al., 2014). In this experiment, the increased growth is considered the effect of shading. This is also because the early harvest was performed before 70 DAT, which is the proper harvest time of Kimchi cabbage during spring cultivation.

The GDDs in the primary production regions during the spring cultivation season are shown in Fig. 4. The region with the highest GDD was ‘Gimhae’ in the early, optimal and delayed transplanting times, which was 876, 903, and 931, respectively. However, the region with the lowest GDD was Bonghwa in the early, optimal, and delayed transplanting time, which was 704, 724, and 762, respectively. Additionally, we compared the shoot fresh weight of each region by simulation of the Kimchi cabbage model (Fig. 5). The highest predicted regions were Jindo, Haenam, and Seosan with about 2.6 kg in all transplanting times. Therefore, the range of GDD in the primary Kimchi cabbage production regions during spring cultivation was 750－870 for the optimal cultivation time. The limitation of the Kimchi cabbage model developed by Moon et al. (2019) was that it used meteorological data unrelated to greenhouse cultivation such as wind speed and precipitation. Therefore, it is considered that the model needs to be supplemented with meteorological data suitable for greenhouse cultivation. The actual shoot fresh weight data were measured only twice, which limited to comparison with the predicted shoot fresh weight. Thus, the model’s accuracy could be improved if more data on shoot fresh weight are obtained. 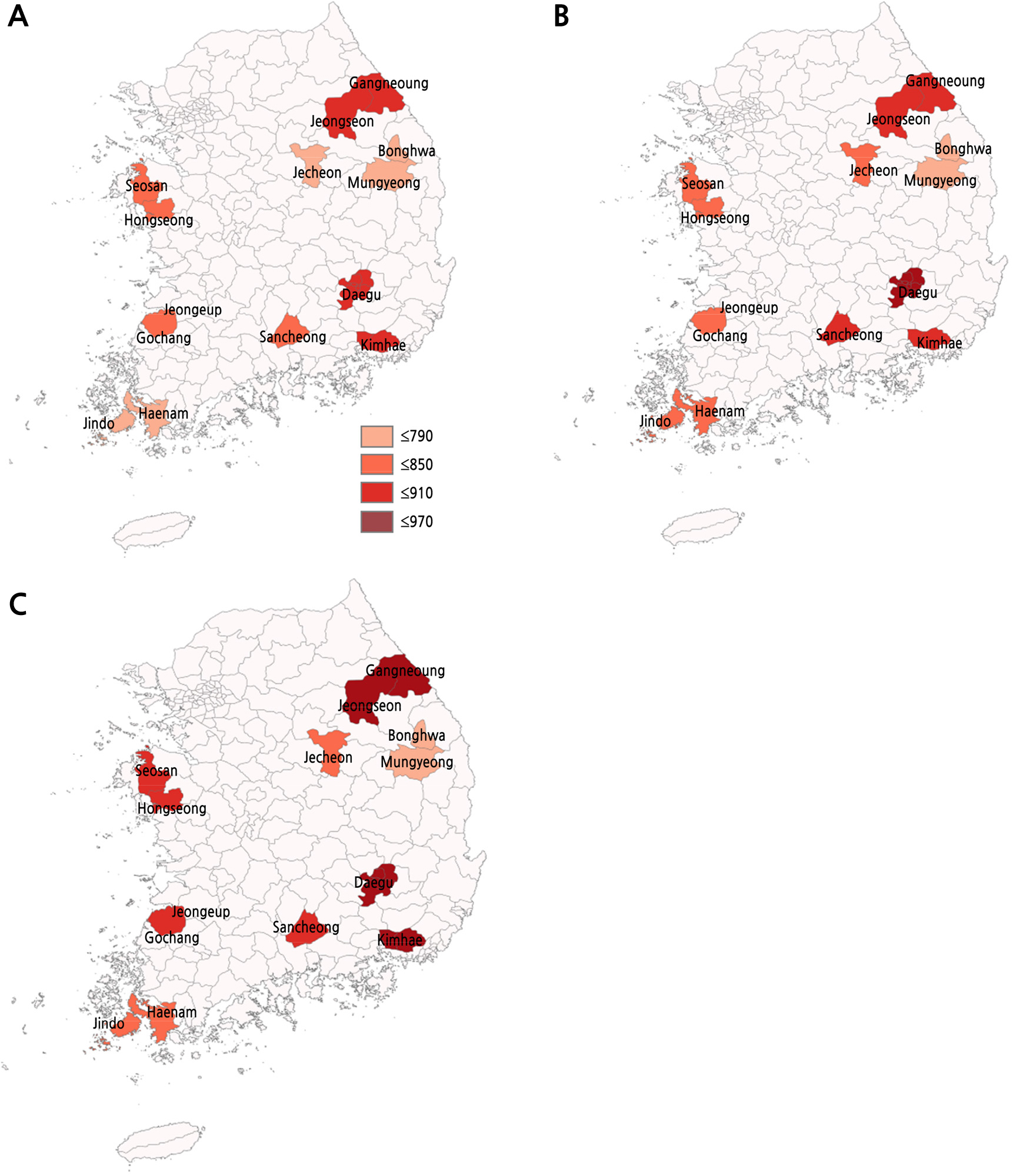 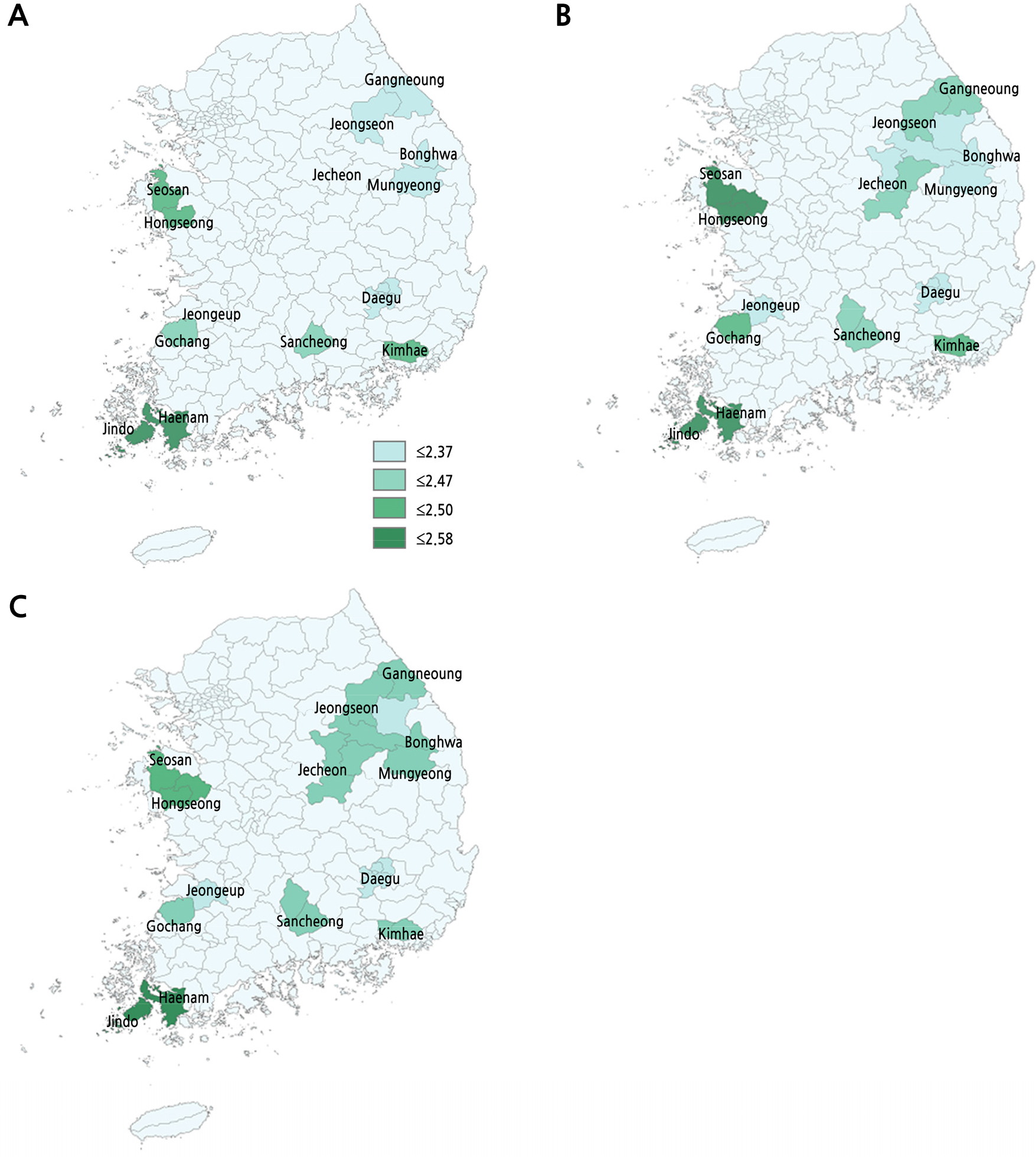 The delayed transplanting time resulted in the highest values for most of the growth parameters. However, tip burn disorders occurred in ‘Cheongna’ and ‘Cheongok’ in the delayed transplanting time (Fig. 3F and 3I). Therefore, though the delayed transplanting time gave the highest growth, considering the physiological disorders, we decided that the optimal harvest time was GDD at 924 under shading. The number of leaves is important for head formation, and the number of leaves was higher in ‘Chungwang’ in all transplanting times. Furthermore, the number of leaves in ‘Chungwang’ was greater than in the other cultivars in all transplanting times. Therefore, we considered that ‘Chungwang’ grown during spring cultivation under shading was less sensitive to high temperature than the other cultivars. The range of GDD in the primary Kimchi cabbage production regions during the spring cultivation season was 750－870 for the optimal harvest time. This indicated that if shading is conducted even in areas with relatively high temperatures, such as Daegu or in the primary production regions, physiological disorders caused by temperature or rain will be reduced, and high quality and stable production will be possible even if the GDD is high. Our results indicated that shading improved Kimchi cabbage growth in inadequate environments such as high temperature during the spring cultivation season.

Our results indicated that ‘Chungwang’ was less sensitive to high temperature stresses than the other cultivars during spring cultivation. GDD 924 was the optimal cultivation time under shading conditions in Daegu. GDD 750－870 is considered the appropriate harvest time in the primary production regions during spring cultivation. If shading is performed in these regions, a constant production could be possible, reducing damage from high temperature. In addition, Kimchi cabbage’s growers can know with GDD corresponding to the optimal cultivation time the sowing and transplanting times for each cultivation regions. In addition, it was possible to predict the yield through the Kimchi cabbage model. Results indicated that a grower’s decision support for practical cultivation and a distributor predict yield and harvest timing in spring cultivation.

This work was carried out with the support of "Cooperative Research Program for Agriculture Science & Technology Development (Project No. 01501901)" Rural Development Administration, Republic of Korea.

The authors declare no conflict of interest.