The Hydrangea ‘Moonlight’ cultivar was registered in 2020 by Chonnam National University. In 2015, mophead-type H. macrophylla ‘Adria’ and mophead-type H. macrophylla ‘Ocean’ were crossed, and the progenies were grown in 2016. We screened and selected for disease resistance lines during a field trial in 2016, and investigated the flower type, floral color, and growth type from 2017－2018. Finally, we selected the distinctive line D15009. The showy sterile flower’s (sepal) color was pinkish (RHS Color Chart Purple Group 75C) and the floral head type was mophead. The inflorescence width and height were 7.80 and 14.84 cm, respectively. The average number of showy sterile flowers (calyces) per inflorescence was 152.3, and they were scentless. The average plant height was 56.83 cm and the growth type was semi-erect with stems that were bowing. Leaf length and width were 11.22 and 7.20 cm, respectively. ‘Moonlight’ was a late flowering garden cultivar. Flowers began to bloom in mid-April in the greenhouse, but in early June in the outer fields. There was a wide variation in flower color, ranging from pink, dark purple, and blue in accordance with the measurement of soil pH during gardening and pot cultivation. A new Hydrangea cultivar, ‘Moonlight’ was registered with the Korea Seed and Variety Service (plant variety protection number: 8059).

The genus Hydrangea consists of approximately 23 species, several of which are cultivated as ornamentals (McClintock, 1957). These plants are distributed throughout East Asia, Eastern North America, and South America. The genus Hydrangea is one of the most popular ornamental flowers. Hydrangea macrophylla is the most popular and most cultivated species of the Hydrangea genus. Generally, hydrangeas refer to H. macrophylla and they may be either a mophead or lacecap type (Uemachi and Nishio, 2005; Uemachi et al., 2006; Kitamura and Ueno, 2015; Lee et al., 2019). H. macrophylla is a popularly cultivated horticultural crop grown in America, Asia, and Europe. Because of its large and colorful showy inflorescences, this native of Asia is grown as both a garden shrub and as cut flowers (Kitamura and Ueno, 2015; Lee and Lee, 2018). This flower is valued for its large corymbs, which range from pink to blue in color and from pale to deep color in intensity, depending on the soil pH and cultivar genotypes. H. macrophylla, with over 1000 cultivars, is one of the most important flowering shrubs, and its popularity is attributed to its versatility as a garden shrub, a florists’ pot plant, and a cut flower. In Korea, Hydrangea is a summer flowering shrub with a long flowering period. However, foreign varieties dominate the Korean market, which warrants the development of domestic cultivars. Accordingly, we initiated a breeding program at Chonnam National University in 2014. We performed inner-species crosses to develop marketable domestic hydrangea for cut flowers and garden use, and inter-species crosses for greater crossing ability using close species in the same genomic section (Islam et al., 2020).

Flower characteristic of parents. (A) ‘Adria’ as the maternal plant (B) ‘Ocean’ as the paternal plant.

To investigate horticultural characteristics, plantlets were propagated by the cutting method from the mother plant, and grown in round plastic pots (15 × 20 cm) filled with horticultural soil No. 2 (Bio Best Soil, ©Heungnong) for the first year. During the second and third years, plants were cultivated in square plastic pots (34 × 34 × 28 cm) filled with horticultural soil No. 2 to increase the plant’s volume. Plants were regularly irrigated overhead according to the weather. Characteristics were investigated from the third year of cultivation. The characteristics of hydrangeas were investigated according to Korea Seed & Variety Service guidelines (KSVS, 2015).

The soil pH was measured in each pot showing a different flower color as described by Kim et al. (1999). The seedlings were propagated by the cutting method of the parent plant, and the rooted plants were cultivated for 2 years in round plastic pots (15 × 20 cm) filled with gardening soil No. 2. Eight soil samples from each pot were transferred to the laboratory and dried in the shade for 2 weeks. Later, they were filtered with a 2mm sieve and used for soil hydrogen exponent analysis (Kim et. al., 2007). Soil pH was measured with a pH meter (Orion Star A211, Thermo) by mixing the dried soil in distilled water (1:5), shaking for 30 min, and then filtering with filter paper (ADVATEC No. 6).

To standardize the development of H. macrophylla flower buds in South Korea, the growth of hydrangea flower buds outside the greenhouse was observed every month from October 2019 to February 2020. The largest flower buds were collected for the analysis on the day of the survey. The bracts were removed with sharp tweezers. The flower buds were cut with a scalpel and visualized using a stereoscopic microscope (KL200LED, Carl Zeiss). The floral development of H. macrophylla was divided into seven stages (Gilles et al., 2008).

In June 2015, we crossed the mophead-type H. macrophylla ‘Adria’ (maternal plant) with the mophead-type H. macrophylla ‘Ocean’ (paternal plant), and obtained 122 capsules in the early winter. The capsule were sown in March 2016 and we obtained 10 breeding lines. We screened and selected for disease resistance lines in the field trial and investigated the flower type, floral color, and growth type in 2016－2017. Finally, we selected the breeding line D15009. In 2018, a new variety for plant protection (application number: 2018-35) was submitted. In 2020, a new H. macrophylla ‘Moonlight’ was registered (plant variety protection number: 8059) with the Korea Seed and Variety Service (Figs. 2 and Fig. 3).

Mophead and lacecap hydrangeas grown in a wide range of soil pH result in various floral colors. Accordingly, the flower color of ‘Moonlight’ varied depending on the soil pH. Eight samples were taken based on distinct flower colors. The color spectrum ranged from blue to pink (Fig. 4). The flower color was blue-purple in plants grown in soils that had a pH between 4.54 and 4.69. The flower color in soil pH 4.91 was purple-pink. In soils at pH 5.26, 5.34, and 5.43, the flower color was pink. Hydrangeas remained pink when the soil pH was about 6.0 or 6.2. H. macrophylla had a varying aluminum content depending on the soil pH (Lee et al., 2014). Low soil pH (acidic) facilitated plant uptake of more aluminum and generated a beautiful blue color (Betty, 2017). ‘Moonlight’ had blue, purple, and pink flower colors when the soil pH was between 4 and 6. As a result, growers can produce various flower colors by controlling soil pH and aluminum uptake content.

Generally, H. macrophylla produces flower buds shortly after blooming, which means they flower in the previous year’s wood (Betty, 2017). In Korea, H. macrophylla usually bloom from May to June. In the outdoor condition, the early stage of flower bud development was observed from October, and the final stage, when flower formation was complete, happened in February(Lim et al., 2020). Hydrangea blooms faster when grown in a heated greenhouse than when grown in the field(Lim et al., 2020). Fig. 5 illustrates floral bud development and blooming. Fig. 5B and 5J represent the floral buds of ‘Moonlight’ and ‘Verena’ grown in the same environment on the same day. The flowers of ‘Verena’ bloom faster than ‘Moonlight’. The flower of ‘Verena’ was observed on February 18th (Fig. 5J), while the flower of ‘Moonlight’ bloomed sometimes in April. In the same environment, the flowers at the same stage of development for ‘Moonlight’ were seen on May 20th (Fig. 5D) and those of ‘Verena’ on March 17th (Fig. 5K). These findings suggest that ‘Moonlight’ is a late-flowering cultivar that blooms about 2 months later than ‘Verena.’ In addition, the flowering date of ‘Moonlight’ growing in the heated greenhouse is about a month earlier than that of ‘Moonlight’ grown in the field (Fig. 5). 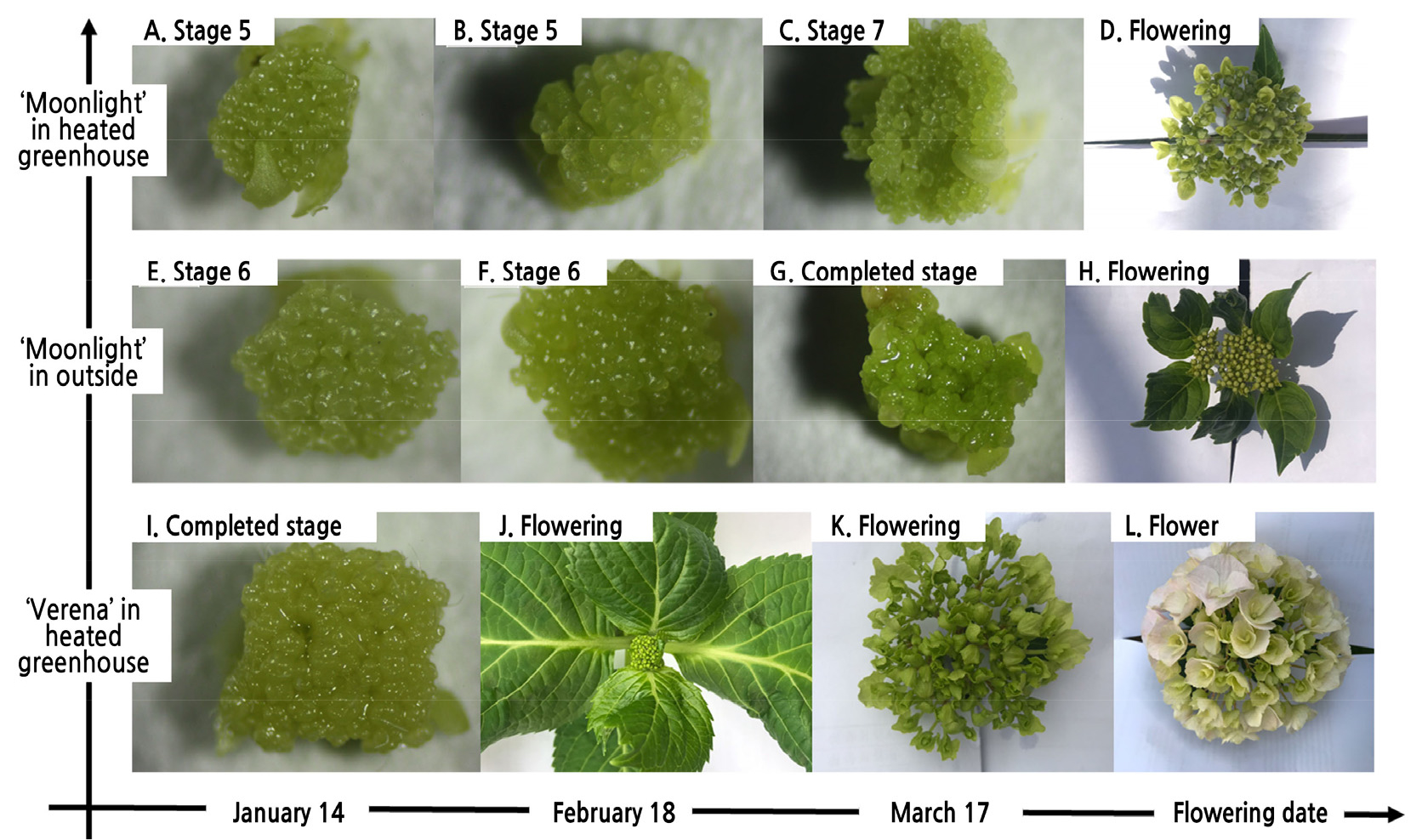 This work was supported by the Korea Institute of Planning and Evaluation for Technology in Food, Agriculture, Forestry and Fisheries (IPET) under the Export Promotion Technology Development Program, and funded by the Ministry of Agriculture, Food and Rural Affairs (MAFRA)(315041-05).