In the Republic of Korea, the root pruning splice-grafting method is commonly used on watermelon (Citrullus lanatus) and cucumber (Cucumis sativus) seedlings to produce grafted plants. The growing medium is an important factor for rooting a transplant. In this study, we investigated the shoot growth and root development of cucumber seedlings in different growing media. ‘Shindong’ cucumber seedlings as scions were grafted onto ‘Shingiwon’ bottle gourd (Lagenaria siceraria) seedlings as rootstocks using the root-pruning one-cotyledon splice-grafting method. The grafted seedlings were transplanted into five different media: commercial growing medium (CGM), rockwool (RW), LC grow foam (LC), RC grow foam (RC), and terra-plug (TP). We also investigated the effect of fertigation on plant growth in the different media. Root morphology was significantly influenced by all five media. The total root length, root volume, and root surface area were greatest in the CGM. However, inorganic media (RW, LC, and RC) resulted in low root growth. Fertigation increased root growth, especially in the CGM. Root growth affected the shoot growth of cucumber seedlings. The shoot growth of cucumber seedlings was greatest in the CGM and TP medium, which also had good root development. In conclusion, CGM with fertigation was advantageous for cucumber root development and growth, and TP showed promise for use as a growing medium in the seedling stage.

Plug seedling nurseries in the Republic of Korea have increased in number since the early 1990s because plug seedlings have advantages, such as efficiency and automation, when producing seedlings. Many Korean seedling nurseries use grafted seedlings for production of fruit and vegetable crops, such as watermelon (Citrullus lanatus), cucumber (Cucumis sativus), tomato (Solanum lycopersicum), pepper (Capsicum annuum), and eggplant (Solanum melongena) (Lee, 2007).

Optimum root development is necessary for proper shoot growth and crop yield (Leskovar and Stofella, 1995). The size, morphology, or architecture of a root system may control the relative size and growth rate of the shoot (Drew and Stolzy, 1991). Because acquiring strong roots is the main purpose of grafting, it is important to understand the root development of grafted seedlings. The physical properties of a growing medium effect root development. For example, total porosity determines the water storage and air space of a growing medium (De Boodt and Verdonck, 1971; Peterson et al., 1991). When the medium has a low container capacity, absorption of water and nutrients is disrupted, which stresses the root system (Aljibury and May, 1970; Martin et al., 1970). Bulk density represents the physical properties of a medium, especially compaction of the medium particles. When a medium has low bulk density, it may be insufficient to hold the plants. (Goodman and Ennos, 1999; Lee et al., 2019). Thus, the physical properties and nutrient-holding capacity of a growing medium are important for producing high-quality crops (Beardsell et al., 1979).

Different types of growing media are used for ornamental and horticultural plants. Many criteria of growing media are considered, such as nutrient-holding capacity, physical and chemical properties, cost, and grower preference. Furthermore, during plug seedling production, the convenience of transplanting is also considered when selecting a medium. Insufficient root development of seedlings causes soil-based medium to crack, making these types of media inconvenient for transplanting and growth. Moreover, particles and dust from soil-based media can hinder hydroponic production systems. Artificial media, such as rockwool (RW), and newly developed media, such as ‘forming media’ [LC grow foam (LC), RC grow foam (RC), and terra-plug (TP)], have uniform physicochemical properties, and offer many advantages during transplanting. Media with uniform physicochemical properties are easier to water and manage nutrients (Beardsell et al., 1979). Nevertheless, there is little information about shoot growth or root development of root-pruning grafted seedlings grown in artificial or forming media.

Information on the effect of the media and fertigation on root development of cucumber seedlings is lacking. The objective of this study was to examine the root development of cucumber seedlings produced by RPOC-SG in different growing media. To this end, we investigated the shoot growth and root morphology in different growing media and the effect of fertigation on plant growth.

In this experiment, cucumber (Cucumis sativus L. ‘Shindong’) and bottle gourd (Lagenaria siceraria Standl. ‘Shingiwon’) were used as the scion and rootstock, respectively. Cucumber and bottle gourd seeds were sown on the same day in plug trays filled with a commercial growing medium (Plantworld, Nongwoobio Co. Ltd., Suwon, Korea). Eight days after sowing, the cucumber seedlings were grafted onto the bottle gourd seedlings using the RPOC-SG method. After grafting, the grafted seedlings were transplanted into five different media: commercial growing medium (CGM), rockwool (RW, Grodan Co. Ltd., Roermond, The Netherlands), LC grow foam (LC, Smithers-Oasis Co. Ltd., OH, USA), RC grow foam (RC, Smithers-Oasis Co. Ltd., OH, USA), and terra-plugs (TP, Smithers-Oasis Co. Ltd., OH, USA). They were then transported to a healing chamber with a temperature of 24°C, a relative humidity of 95 to 100%, a photoperiod of 16/8 h (light/dark), and a light intensity of 40 ± 5 µmol·m-2·s-1 photosynthetic photon flux density (PPFD) using LEDs (red:blue = 30:70). Five days later, the well-healed grafted seedlings were move from the healing chamber to a greenhouse. During the experimental period, the minimum, maximum, and average temperatures of the greenhouse were 19, 32, and 24°C, respectively.

Composition of the nutrient solution used in the experiment

Physicochemical Properties of the Medium

To measure the physical properties of the different media, such as total container capacity, air space, total porosity, and bulk density, we measured the wet weight after soaking the medium for 48 h, and the growing medium weight and drained water volume were measured after draining for 2 h at room temperature. The dry weight was measured after the medium was allowed to completely dry for 72 h. The measured value was calculated using the formula given by Fonteno and Choi et al. (Fonteno, 1996; Choi et al., 1997).

To measure the chemical properties, each medium was mixed at a ratio of 1:5 (v/v) with distilled water and was shaken using a shaker (KS-500, Koencon Co. Ltd., Hanam, Korea) for 3 h. Then, the pH and EC were measured using a multiparameter (8200M, GOnDO Electronic Co., Ltd., Taipei, Taiwan).

The experiment was laid out in a completely randomized design with three replications per treatment, each of which consisted of 40 grafted plants per plug tray. All the assays were performed in triplicate, and the results were averaged. To analyze the physicochemical properties of the growing medium and root morphology, three replicates were used for each growing medium. The statistical analysis was carried out using the Statistical Analysis System program (SAS 9.1, SAS Institute Inc., Cary, NC, USA). The results were subjected to analysis of variance (ANOVA) and Tukey’s multiple range tests. Graphing was performed with the SigmaPlot program (SigmaPlot 12.0, Systat Software Inc., San Jose, CA, USA).

Physicochemical Properties of the Growing Medium

The physicochemical properties of the growing media used in the experiment

The optimal range of pH values in growing media was suggested to be between 5.6 and 6.5 (Nelson, 1991). Among the media used in our experiment, RC and TP were in this range. The EC was the highest in TP and CGM at 0.30 and 0.27 dS‧m-1, respectively. This may be because TP and CGM are composed of organic materials, whereas the other media are composed of inorganic materials, so their EC values were lower. 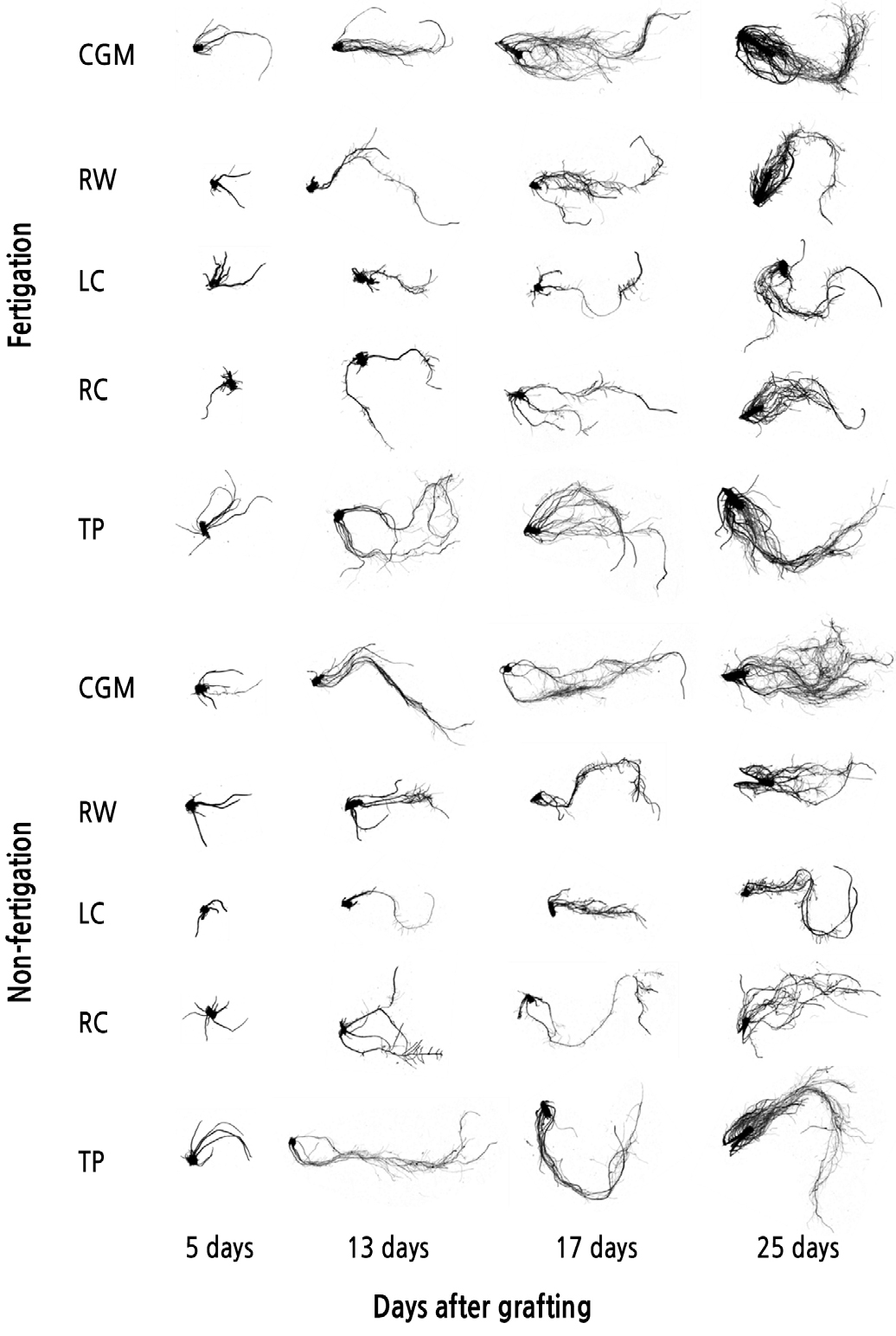 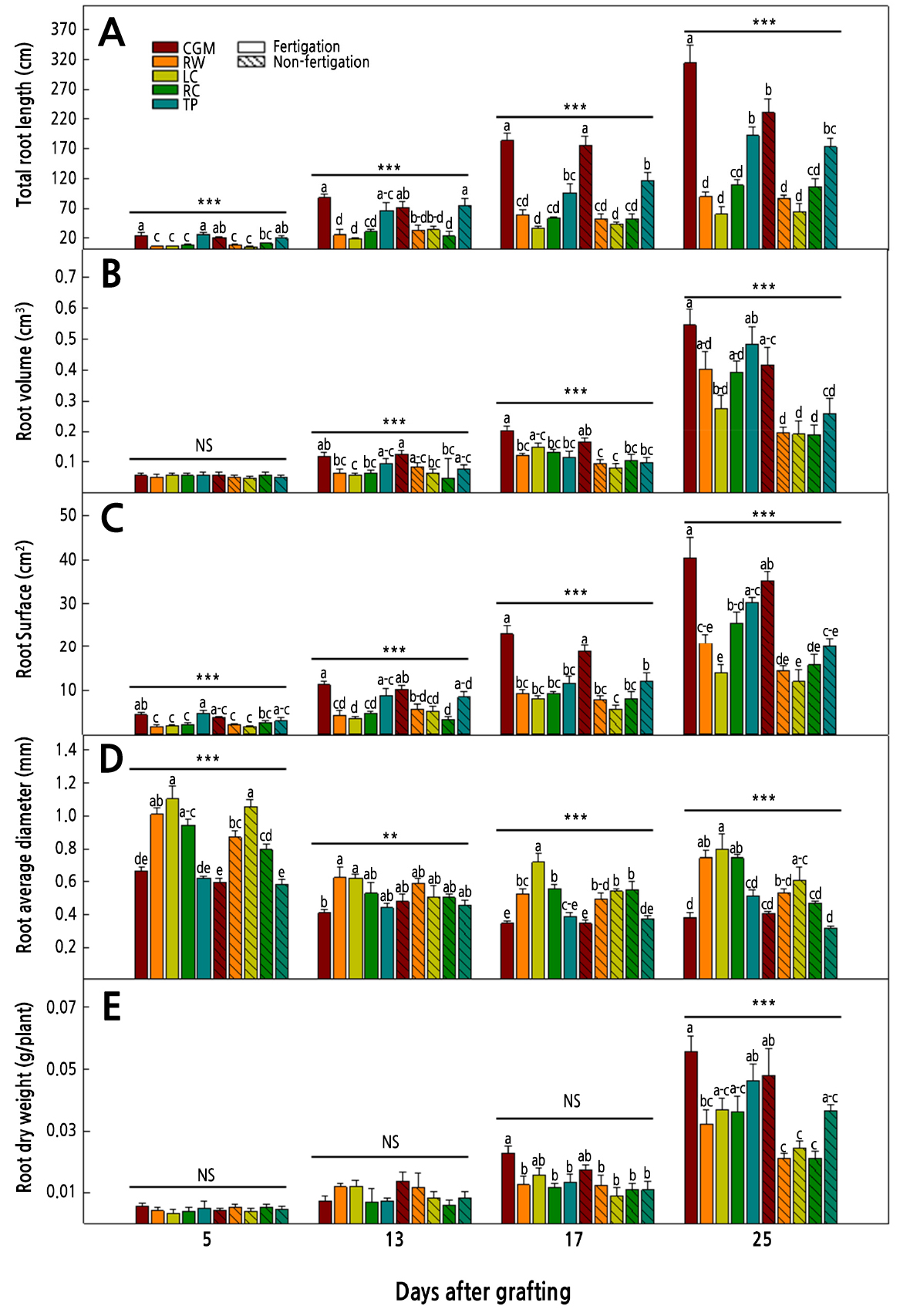 Well-developed root systems facilitate proper shoot growth and plant development. Root morphology is known to be influenced by the rhizosphere condition (Fageria and Moreira, 2011). Our results showed that root morphology parameters (i.e., total root length, root volume, root surface area, and average root diameter) were affected by the different mediums and fertigation. Seedlings are generally grown in small cells (Nelson, 1991) and are easily exposed to nutrient deficits. In this study, the fertigation treatment increased root development in all media. The average root diameter showed the opposite effect from other root morphology parameters. The seedlings in CGM and TP had lower average root diameters than did those in other media. A thin average root diameter indicates that the seedling has many fine roots and branched roots. Fine roots can easily penetrate into the soil, minimizing root system maintenance and construction costs (Forde and Lorenzo, 2001). In addition, many studies have shown that young roots exhibit the highest rates of nutrient uptake (Wells and Eissenstat, 2003). Therefore, seedlings in CGM and TP have greater advantages in terms of nutrient uptake and a more developed root system after transplanting. 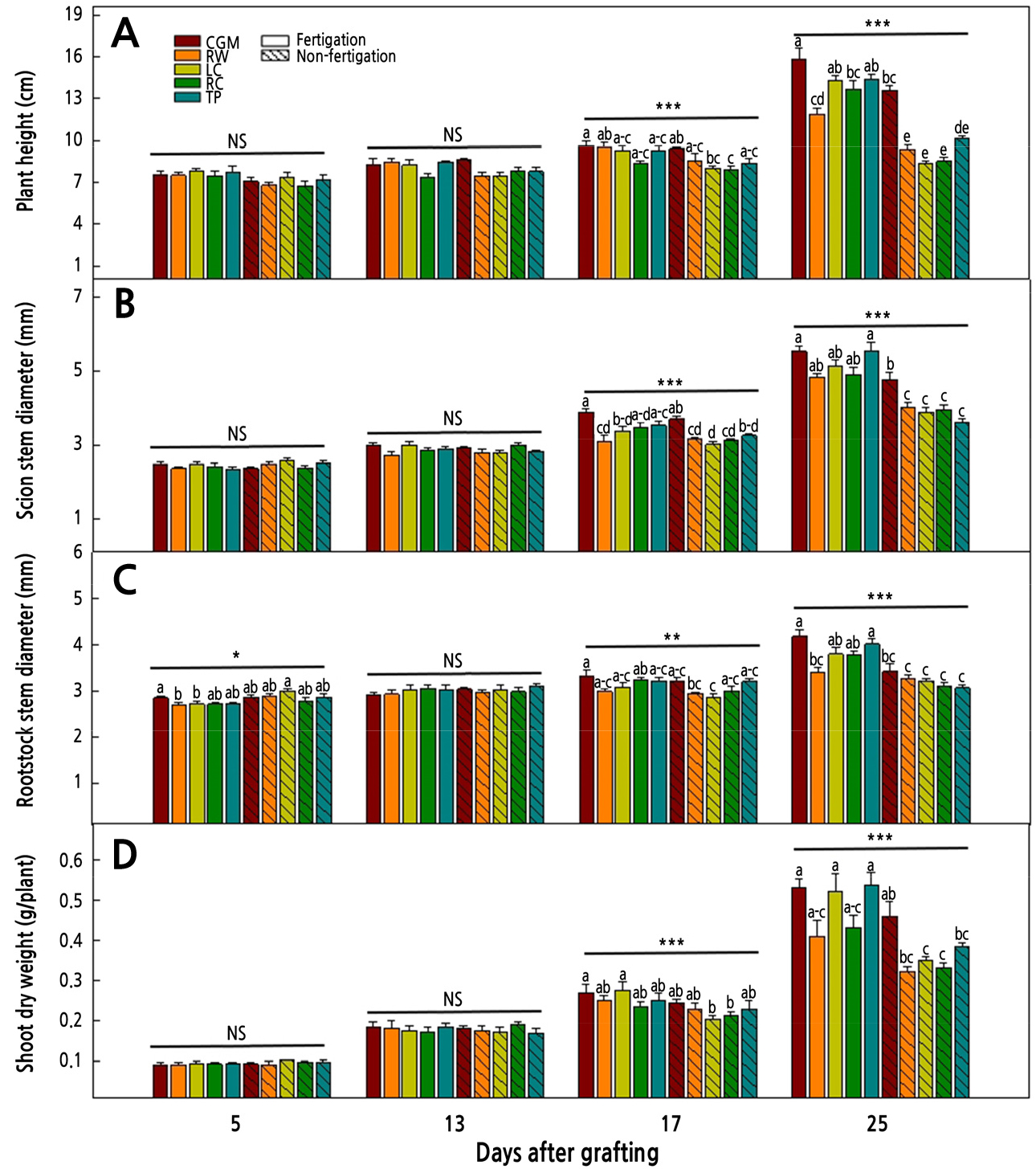 Changes in plant height (A), scion stem diameter (B), rootstock stem diameter (C), and shoot dry weight (D) of cucumber seedlings grown in five different media with or without fertigation. The vertical bars represent the standard deviation of the mean (n = 6). Different letters in the same column indicate significant differences based on Tukey’s multiple range test at p < 0.05 (n = 6). NS, *, **, *** Nonsignificant or significant at p < 0.05, 0.01, or 0.001, respectively.

The growth of cucumber seedlings showed a similar tendency during root morphological development. CGM with the fertigation treatment increased seedling growth (Table 3 and Fig. 4). The plant height, leaf length, leaf width, and fresh weights of shoots and roots were highest in CGM with fertigation at 15.86 cm, 12.0 cm, 10.4 cm, 8.7 g, and 0.85 g, respectively. The stem diameters of the scion were highest in CGM and TP with fertigation treatments, at 5.53 mm, 5.52 mm, and stem diameters of rootstock were highest in CGM and TP with fertigation treatments, at 4.19 mm, and 4.02 mm, respectively. The CGM and TP medium had higher EC levels than did the inorganic media (RW, RC, and LC) (Table 1). Earlier studies reported that plants are impacted by eluted ions from the medium (Hamdreck, 1993; Ao et al., 2008; Choi et al., 2012). Moreover, root morphology affects cucumber seedling growth. Previous studies have reported that healthy, robust root systems can induce vigorous shoot growth (Nicola, 1998). In this study, seedling growth was increased in the CGM and TP medium because root growth was highest in these media. Traditionally, most Korean nurseries do not use nutrient solutions during seedling production. Seedling production takes place over too short a period and many nurseries use growing media that contains nutrients. However, in the present study, fertigation promoted seedling growth. 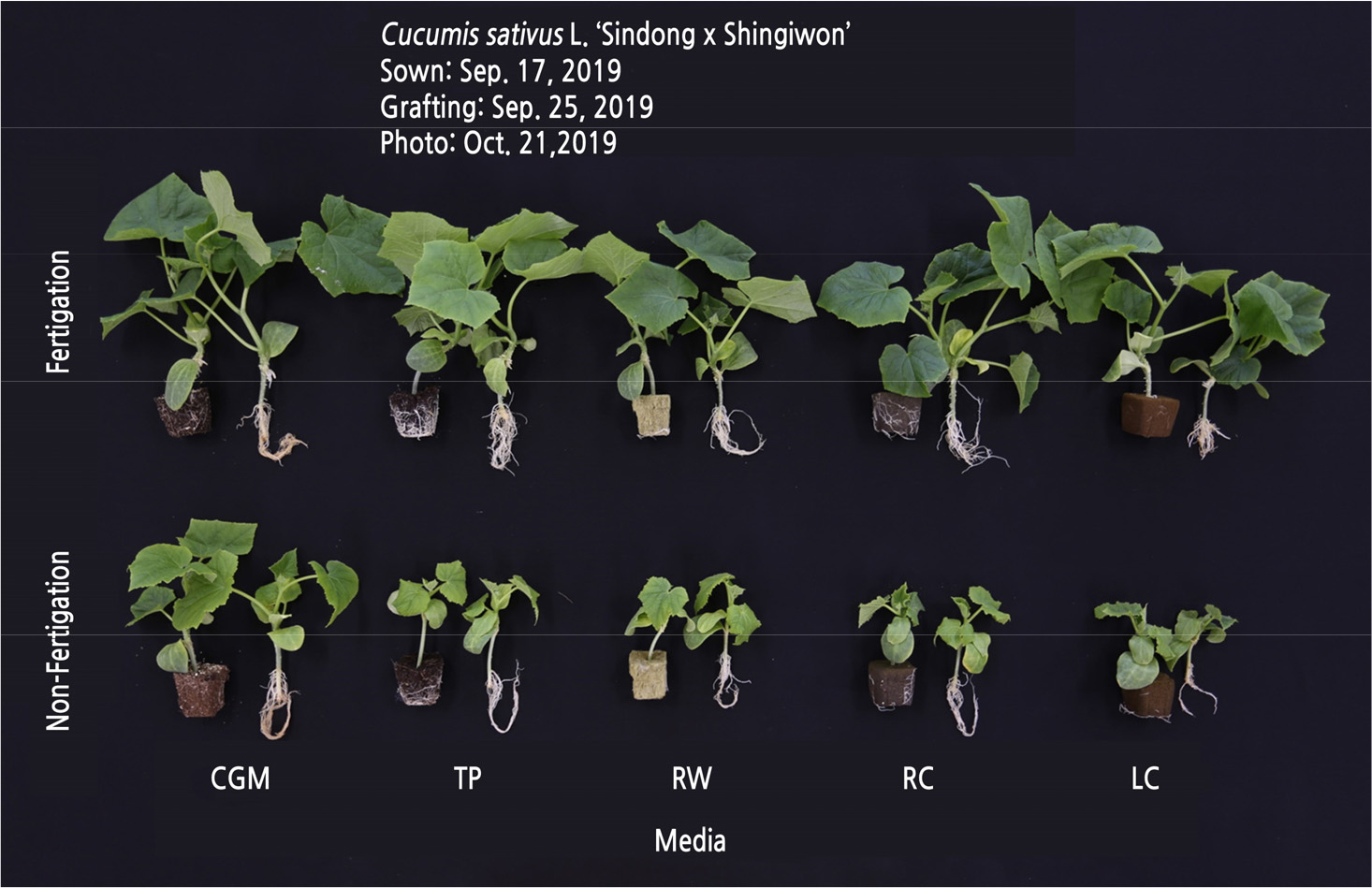 This work was supported by the National Research Foundation of Korea (NRF) grant funded by the Korea government (MSIT) (No. 2018R1D1A1B07046858).