To date, several studies have investigated the effects of plant spacing on the levels of secondary metabolites (Nurzynska-Wierdak and Zawislak, 2014; Benhmimou et al., 2017; Machado et al., 2018). However, the effects of plant spacing on the glucosinolate content of watercress grown under a deep-flow technique and greenhouse-based hydroponic culture system have yet to be reported. We therefore sought to determine optimal plant spacing for enhancing plant growth, yield, and glucosinolate content in watercress grown under different plant spacing regimes at different harvesting times.

Watercress seeds (Danong Seed Co., Ltd., Seoul, Korea) were sown in a crushed rockwool media tray (60 × 40 cm, 240 holes; UR rockwool, Suwon, Korea), kept in the dark for 1 day, and then moved to a germination room, where the air temperature was maintained at 22 ± 1°C and 18 ± 1°C during the day and night, respectively, under fluorescent lamps (TL5 14W/865; Philips, Seoul, Korea) with a PPFD of 180 ± 10 µmol·m-2·s-1 on the surface of the tray. The relative humidity of the room was maintained at 65 ± 10% and 75 ± 10% during the day and night, respectively, and the seedlings were soaked in water daily for 1 min. At one week after sowing, the seedlings were soaked daily in Hoagland nutrient solution (electrical conductivity (EC) 0.6 dS·m-1) for 1 min. Finally, uniform 14-day-old seedlings were selected and transplanted into a deep-flow technique (DFT) system [0.9 m (W) × 3.6 m (L) × 0.1 m (H)] that was installed in a greenhouse. Hoagland solution (EC 2.06 dS·m-1, pH 6.03) was supplied and replaced every 2 weeks. The average temperature and relative humidity in the greenhouse were maintained at 19.7°C and 63.5%, respectively, during the experimental period.

Seedlings were transplanted into three DFT bed systems in a greenhouse with three plant spacing treatments: 31 cm (36 plants per bed), 20 cm (72 plants per bed), or 14 cm (144 plants per bed) (Trendmark, 2018). Each treatment was carried out on three beds and the size of each bed was 3.24 m2. The EC and pH values of the nutrient solutions were measured every 2 days using a portable conductivity and pH combo meter (HI98129; Hanna Instrument Co., Ltd., Woonsocket, USA).

The growth parameters of watercress plants were measured at 35 and 56 days after transplanting (DAT). Lateral branch length was manually measured using a measuring tape (STHT-36127; Stanley Electric Co., Ltd., Tianjin, China). Shoot fresh weight was measured by an electronic scale (ARG224; OHAUS Instruments Co., Ltd., Shanghai, China), while shoot dry weight was measured using the same scale after the samples had been dried in an oven (HB-502M; Hanback Sci, Suwon, Korea) at 79°C for 7 days. Yield was defined as the total shoot fresh weights of all plants in a given treatment group.

Determination of Individual Glucosinolate Concentrations in Leaves and Stems of Watercress

Samples from each treatment group were directly placed in liquid nitrogen after harvesting and stored at -70°C before being transferred to a dry freezer (TFD5503, ILShin biobase Co., Ltd., Korea), where they were stored at -50°C within 4 days. Next, each sample was ground into a fine powder using a porcelain mortar and pestle, and the powder was passed through mesh sieves. The watercress powder samples (0.1 g) were combined with 1.5 mL of boiling 70% (v/v) methanol (up to 70°C), mixed by vortexing, and centrifuged at 12,000 × g for 10 min at 4°C using a microcentrifuge (R17 Plus; Hanil Scientific Co., Ltd., Gimpo, Korea). The samples were then desulfurized by the DEAE Sephadex A-25 ion exchanger (Sigma-Aldrich Korea, Seoul, South Korea) to remove impurities. The supernatant of each sample was then refined using a 0.45 µm filter. Desulfo-glucosinolates were determined using a high-performance liquid chromatography (HPLC) system (1200 Infinity, Agilent Technologies, Santa Clara, CA, USA) using an Inertsil ODS-3 (C18) column 150 × 3.0 mm i.d., particle size 3 µm (GL Science, Tokyo, Japan) with a column temperature of 40°C, a flow rate of 0.4 mL·min-1, and a wavelength of 227 nm. Water (A) and 100% acetonitrile (B) were used as the solvent systems. The gradient program (total of 27 minutes) was used as follows: 0% solvent B (0 min); 0% solvent B (0 - 2 min); 10% solvent B (2 - 7 min); 31% solvent B (7 - 16 min); 31% solvent B (16 - 19 min); 0% solvent B (19 - 21 min); and 0% solvent B (21 - 27 min). Afterward, the HPLC peak area ratios and response factors (ISO 9167-1, 1992), with reference to a desulfo-sinigrin external standard, were used to determine the individual glucosinolates (glucohirsutin, gluconasturtiin, 4-methoxyglucobrassicin, glucosiberin, and glucobrassicin) in watercress (Table 1) (Jo et al., 2016; Jeon et al., 2017; Cuong et al., 2019). Glucosinolate content (µmol/shoot DW) refers to total glucosinolate concentration of a shoot (µmol·g-1 DW) multiplied by shoot dry weight (g). Glucosinolate content in a unit area (mmol/shoot DW/m2) refers to glucosinolate content in the shoot (µmol/shoot DW) multiplied by the number of plants in a square meter.

Table 1. Response factors of the desulfo-glucosinolates in watercress extracts and their retention times on C18 column 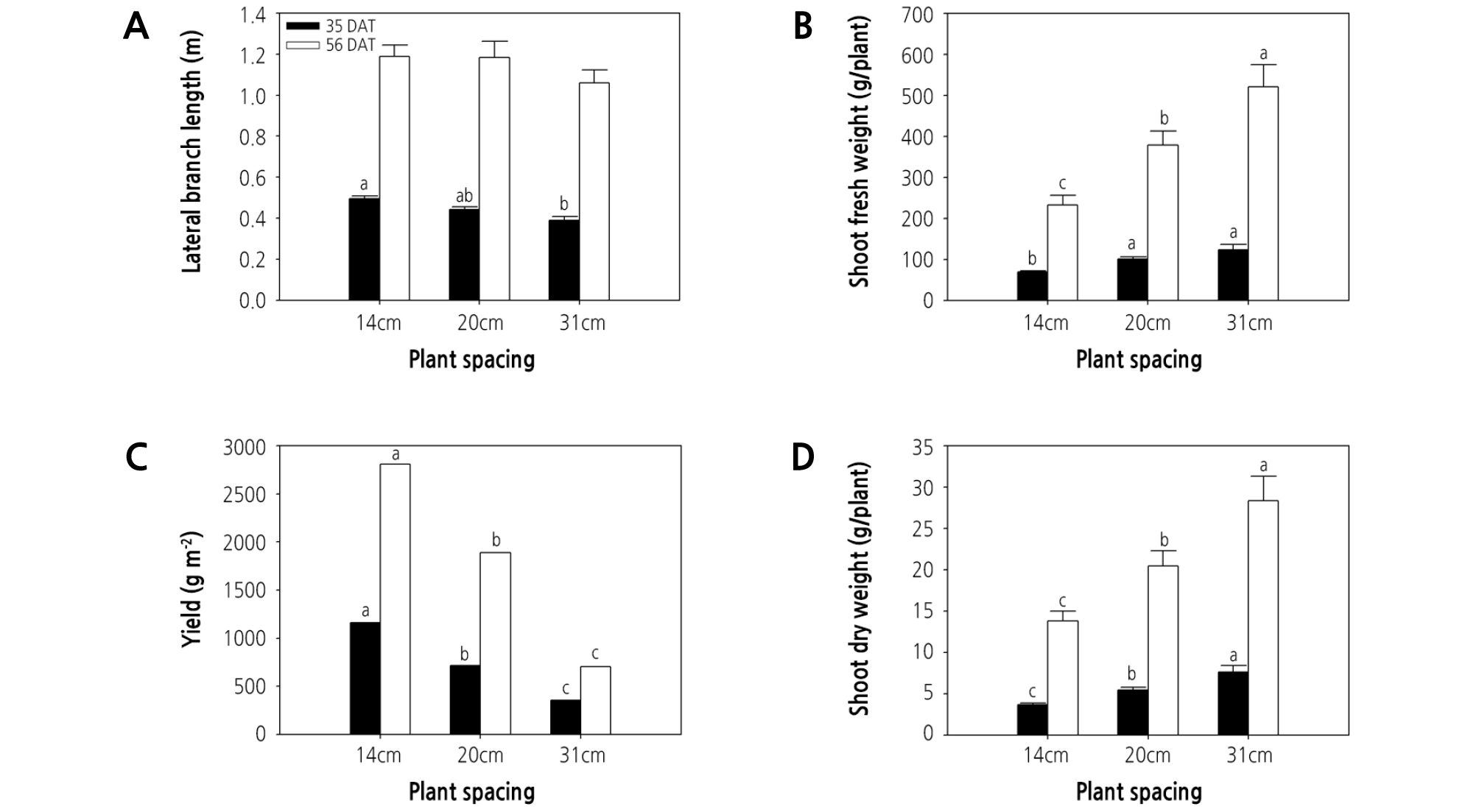 Effect of plant spacing on lateral branch length, shoot fresh and dry weight, and yield of hydroponic watercress at 35 and 56 days after transplanting (DAT). The data represent the means and the vertical bars indicate the standard error (n = 7). Different letters at the top of the bars indicate significant differences in plant spacing according to Tukey’s multiple range test (p ≤ 0.05).

Shoot fresh and dry weights increased significantly with increasing plant spacing (i.e., decreasing plant density), regardless of the harvest time (Fig. 1B and 1D), and were greatest under the 31-cm spacing treatment. The increased biomass observed under the greatest level of spacing could possibly be attributed to a greater availability of nutrients or light, and these results correspond to those of almost all previous studies that have examined the relationship between shoot fresh and dry weights and plant spacing, including in lettuce (Hasan et al., 2017), arrowroot (Qodliyati et al., 2018), carrot (Kabir et al., 2013), and sweet potato (Mortley et al., 1991). Nutrient uptake was previously shown to be enhanced under higher plant spacing, which is thought to be due to less competition for water, light, and nutrients (Mojiri and Arzani, 2003). Nitrogen, phosphorus, and potassium concentrations in plants were found to be higher under wider spacing compared with narrower spacing (Khalaj et al., 2012). Resource supply was limited by lower plant spacing because of competition between individual plants, which can lead to a reduction in plant biomass compared with higher plant spacing.

Table 2. Glucosinolate concentration of hydroponic watercress leaves and stems harvested at 35 and 56 days after transplanting (DAT) under different plant spacing regimes (14-, 20-, and 31 cm) 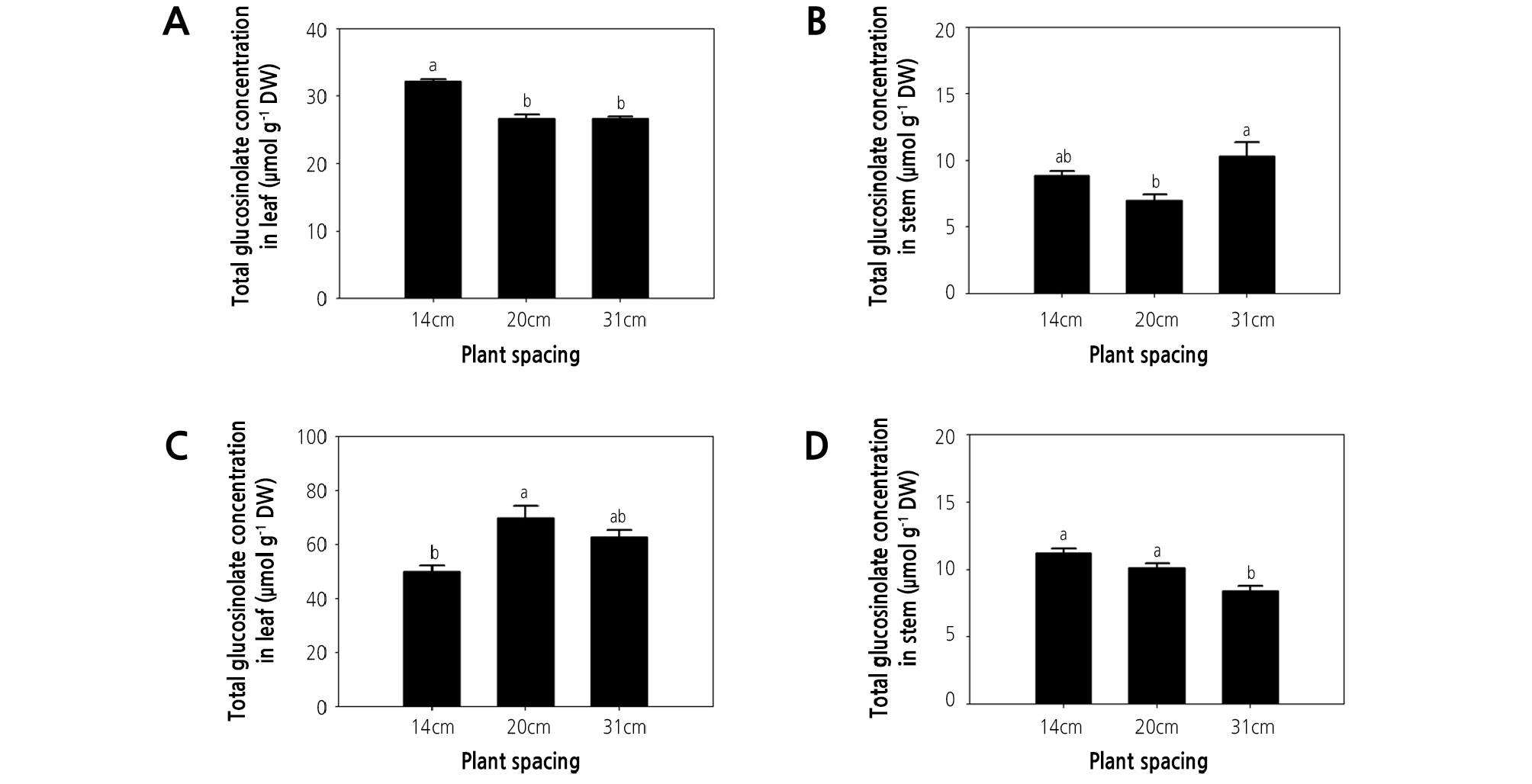 Glucosinolate concentration and content responded differently to the plant spacing treatments. At 35 DAT, the leaf concentration of glucohirsutin, gluconasturtiin, 4-methoxyglucobrassicin, glucosiberin, glucobrassicin, and total glucosinolate were greatest in plants grown under the highest plant density (i.e., 14-cm spacing; Table 2, Fig. 2A), and the same trend was observed for the total glucosinolate concentration in watercress shoots (Fig. 3A). These observations might indicate that nutrient availability is reduced as plant density increases. This may lead to nutrient deficiency because lower plant spacing causes greater competition for nutrients. Moreover, nutrient deficiency can lead to an increase in secondary metabolites in plants. Likewise, the content of rosmarinic acid in P. vulgaris was increased under low nutrient supply (Chen et al., 2011), the phenolic acid content of rice plants was increased under nutrient deficiency (Chishaki and Horiguchi, 1997), and the total polyphenol content of lettuce was maximized under nitrogen deficiency (Galieni et al., 2015). Secondary metabolites in plants are affected by nutrient availability. Nitrogen and phosphorus deficiency in a hydroponic system induced the accumulation of flavonol content in tomato and antioxidant activity in Arabidopsis thaliana (Stewart et al., 2001; Kandlbinder et al., 2004). Phytochemicals in lettuce were increased under nitrogen stress conditions (Galieni et al., 2015). In contrast, the greatest total glucosinolate content in watercress shoots was obtained under the 31-cm spacing treatment at 35 DAT. However, this may be due to total glucosinolate content being dependent on shoot dry weight (Fig. 3C). It is likely that greater plant density increases plant shading. Indeed, in agreement with the present study, the steviol glycoside content of stevia was greatest under the densest planting, due to competition for water, light, and nutrients (Benhmimou et al., 2017). Meanwhile, the total glucosinolate concentration in watercress stems at 35 DAT was greater under 31- and 14-cm spacing treatments than under 20-cm spacing (Fig. 2B). Similarly, proline and phenol content and antioxidant activity (FRAP and DPPH) of spinach were greatest under low plant density treatment, possibly due to the effects of plant density on light availability (Machado et al., 2018). Therefore, greater plant spacing is likely to enhance the glucosinolate concentration of watercress by providing abundant nutrients and light, among other factors. 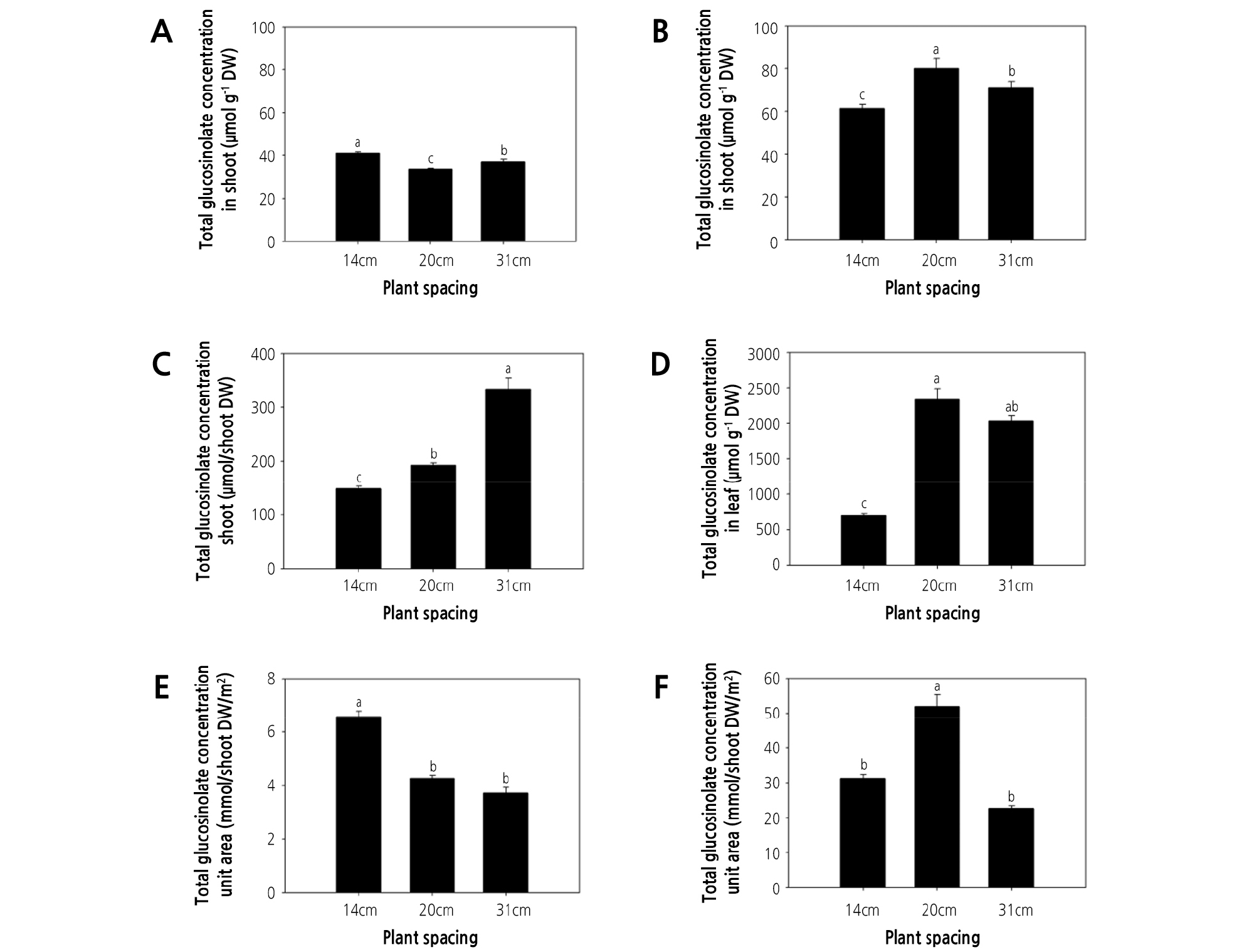 This work was supported by Korea Institute of Planning and Evaluation for Technology in Food, Agriculture, Forestry and Fisheries (IPET) through Advanced Production Technology Development Program, funded by Ministry of Agriculture, Food and Rural Affairs (MAFRA) (116115-03).