This study was conducted to investigate the effects of soil drench or foliar spray with a microbial agent, AGN-LTE, on growth and yield of potato (Solanum tuberosum). To accomplish this, soil was drenched with 500 mL of AGN-LTE solution (30 mL stock·L-1) or leaves were sprayed with 50 mL plus 450 mL water drench Soil drench (500 mL) and foliar application at 30 days after planting and two additional times at 15 day increments. The foliage and tuber weights were measured and tubers were graded by size group and counted. Soil drenching with AGN-LTE treatment led to a significant increase in the number of potato tubers and tuber weight. Top fresh weight per plant increased significantly by 50.9% following soil drenching. In addition, the number of plants and tuber weight increased by 49.9% and 32.5%, respectively, following drench treatment. No significant differences were observed between the control and foliar spray treatment. Marketable yield and numbers of small and extra-small tubers increased significantly in response to drench treatment relative to the control and foliar spray treatments. Our results demonstrated that drench treatment with AGN-LTE could be used to promote potato tuber growth and yield during potato production.

Microbial agents can be used to promote the growth of crops via various actions of specific beneficial microorganisms (Kim et al., 2002). Recently, microbial agents have gained interest because of the influence of active organic farming and awareness of the safety of these agents as well as their potential for use as replacements for chemical fertilizers and pesticides; accordingly, development of new agents is needed (Kim et al., 2003; Kwon et al., 2007).

One of the most commonly used microbial agents is Bacillus sp., which is applied to soil and crops to reduce nutrition depletion and salt accumulation caused by over-use of chemical pesticides and fertilizers (Valenzuela-Soto et al., 2010).

Bacillus sp. have been found to have growth promotion effects in several studies. For example, application of Bacillus subtilis strain KPS-11 to the rhizosphere of potato has resulted in increased stem and root length and weight (Muhammad et al., 2015). Moreover, Bacillus subtilus strain HR-1019 has promoted plant growth in lettuce and could be used as a replacement for compound fertilizer if N-acetyl-thioproline were added (Lee et al., 2013b). Shoot? Length, stem diameter, and root length were also positively promoted by treating Bacillus subtilis strain S37-2 during pepper seedling cultivation in a plug tray (Kim et al., 2003).

Further, AGN LTE was recommended to be used for all plants and trees with shallow roots less than 60 cm depth, including house plants, potted plants, lawns, vegetables, herbs, and leafy greens, according to the company’s web site. In this study, the effects of the microbial agent, AGN-LTE, on the growth and yield of potato plant were investigated.

Seed potato (Solanum tuberosum L., cv. Daeseo) was purchased from Shin-Nong Seed Potato Company (Pyungchnag, Korea), planted on 20 Apr 2016 and harvested on 20 Jul 2016. The bed width was 40 cm and the distance between plants was 30 cm in a single row per bed. The distance between beds was 40 cm. The plot was covered with black plastic mulching for soil temperature, soil moisture, and weed control. The standard cultivation practices distributed by the Rural Development Administration (RDA) were applied (RDA, 2014). The treatments were allocated in the plot by completely randomized design (CRD) with three replications.

The AGN-LTE was purchased from a local store and the ingredients of the stock AGN-LTE are presented in Table 1. The microbial agent used in this study (AGN-LTE) was developed by the Cisbay Company (San Jose, CA, USA) as a bio-fertilizer, which contained Bacillus bacteria (45% w/w), nitrogen (5%), and humic acid (50%).

Composition and ingredients of AGN-LTE

The stock AGN-LTE solution was diluted into water at a rate of 30 mL stock solution in 1.0 L water and applied to soil or leaves. There were three application treatments in this study, drench application, foliar spray, and the control (tap water?). At each application date, 500 mL of the diluted AGN-LTE solution or tap water were poured onto the plants in the plot in the drench treatment or the control, respectively. In the foliar spray treatment, 50 mL of diluted solution was sprayed thoroughly around the canopy of each plant and the plant was drenched with 450 mL of water. A plastic protective cover was used to prevent mist drift in the foliar application treatment. All plots received 500 mL solution or water. The first application was performed at 30 days after planting and the second and third applications were applied at 2 week intervals thereafter.

Foliage and Tuber Weights and Number of Tubers

Foliage and tuber weights and number of tubers per plant in potato (cv. Atlantic) following application by foliar spray and drenching with the microbial agent AGN-LTE (n=33)

zMean separation within columns by Duncan’s multiple range test at the 5% level.

Mean weight of tubers per plant by size group of potato (cv. Atlantic) as affected by foliar spray and drench treatment with the microbial agent AGN-LTE

zMean separation within columns by Duncan’s multiple range test at p < 0.05. [ED highlight p values not used above. P values are recommended, but whichever form in used should be applied consistently throughout the paper.]

Mean tuber number by size group of potato (cv. Atlantic) as affected by foliar spray and drenching with the microbial agent AGN-LTE

A picture of representative potato plants from each treatment is presented in Fig. 1. These pants were selected because they had similar number of tubers and sizes as presented in Table 2.

Mean tuber weight by size groups of potato (cv. Atlantic) as affected by drench or foliar spray treatment with the microbial agent AGN-LTE 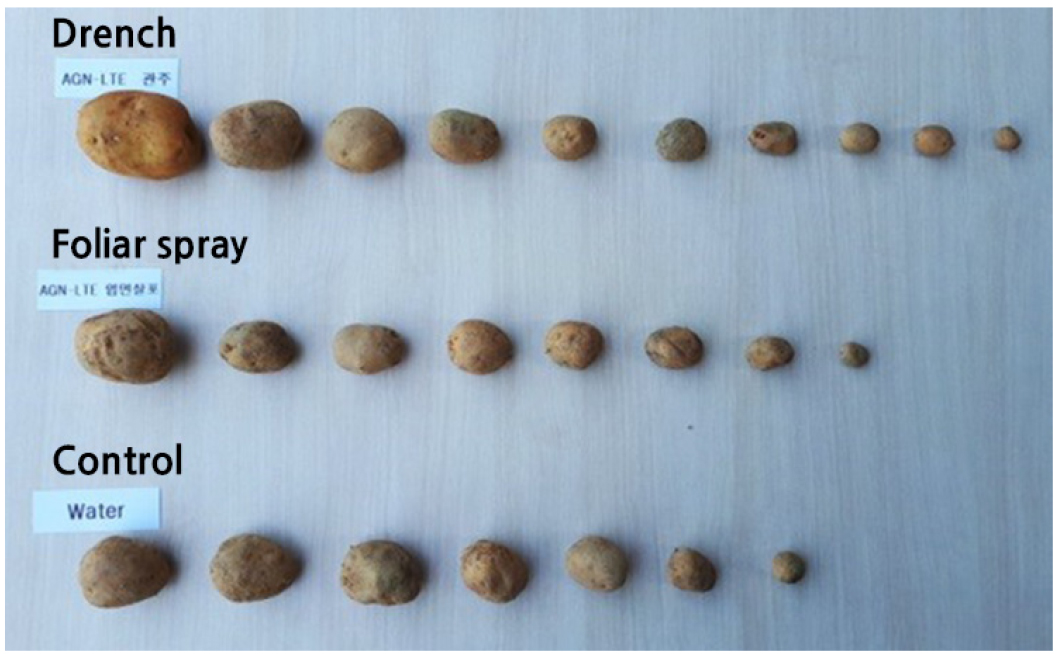 Comparison of tubers per potato plant (Solanum tuberosum L., cv. Atlantic) as affected by drench and foliar application of the microbial agent AGN-LTE.

In this study, we treated potato plants with water or the microbial agent AGN-LTE via foliar spray or drench treatment and found that only the drench treatment induced increases in the foliage and total tuber weight and tuber numbers, mainly due to the increase in extra-small tubers.

The AGN-LTE is sold as a bio-fertilizer that contains Bacillus bacteria, nitrogen (5%), and humic acid (50%) as the main components (Table 1). This material is advertised as having the ability to increase soil vitality, micronutrients, and root growth; therefore, it is recommended for use on plants with shallow roots (Cisbay, 2018). The results of the present study revealed a general improvement in plant growth as reflected by increases if foliage and tuber weight and tuber number.

Microbial agents have been found to have positive effects in medicinal or ornamental plants. Promotion of root growth and suppression of root decay were observed in ginseng plants following treatment with Bacillus subtilis B-4228 (Lee and Park, 2004). In addition, several commercial products containing Bacillus subtilis as the main ingredient were shown to promote increases in root length, diameter, and weight (Choi et al., 2000). Cyclamen, which also contains a microbial agent, reduced damage from heat stress and improved growth of roots and leaves and flower color (Kim and Park, 2013). Subirrigation treatment of rose with a commercial microbial agent increased leaf number and area, stem length and diameter, and root growth, while chemical fertilizer only promoted stem length and resulted in weak stems (Son, 2003).

Promotion of growth and yield of potato and tomato plants in response to application of humic acid and fulvic acid have also been reported (Suh et al., 2014a, 2014b). Increases in mineral nutrients (P and Ca) in plants treated with humic and fulvic acid were also reported in potato and tomato plants, indicating that the treatments led to increased bioavailability or uptake of those nutrients (Suh et al., 2014a, 2014b). With addition of the Bacillus sp. strain, some additional improvement in plant growth can be expected and significant increases in growth and yield were observed in this study. We assumed that the microbial agent AGN-LTE promoted plant growth and increased yields by activating the beneficial microorganisms in general or improving the absorption of nutrients (Chang et al., 2004).

Our study showed that drench application of the microbial agent AGN-LTE, which contained Bacillus sp. and humic acids could increase foliage growth and yield. The microorganisms in the rhizosphere are known to be closely related to the growth of plants, use of this kind of microbial agent is thought to have potential to reduce the use of chemical fertilizers and other pesticides; therefore, such agents are expected to be widely used in environmentally-friendly agriculture programs.

This work was supported by the 2015 Yeungnam University Research Grant.