The production of crops in controlled environments is a growing sector of modern agriculture. The objective of this study was to determine the optimal concentration of culture nutrient solution for the production of carrot leaves in a closed-type plant factory. After sowing, seedlings at the two-true-leaf stage were transplanted to a growing bed system. Hydroponic cultivation was performed using a three-layer NFT system. Culture nutrient solutions were supplied at three electrical conductivity (EC) levels (2.0, 3.0, and 4.0 dS·m-1). Measurements of plant growth characteristics, including fresh weight, dry weight, plant height, and leaf area, were performed 14 and 23 days after planting. Differences in culture nutrient solution concentrations did not affect leaf number and chlorophyll content, and did not cause significant difference in antioxidant capacities and total phenol content of carrot plants. However, contents of total phenol, chlorogenic acid, and kaempferol were highest in plants grown in the EC 2.0 dS·m-1 solution, whereas those grown in the EC 3.0 dS·m-1 solution had the highest fresh and dry weights. Collectively, our results indicate that an EC 3.0 dS·m-1 culture nutrient solution combined with a cultivation period of 20-25 days is optimal for the hydroponic cultivation of carrot leaves in a controlled environment. In addition, we found that carrot leaves contain antioxidant compounds and are thus suitable as a leaf vegetable.

Carrots are one of the most extensively cultivated vegetables in the world. The total production of carrots in Jeju Island, Korea, is approximately 50%, with crop cultivation mainly in the winter season (KOSIS, 2015). It is well known that carrot roots contain many functional components, including vitamins A, C, E, B1, B2, and B6, α-carotene, β-carotene (the precursor of vitamin A), and rutin (Shin and Bae, 2001; Lee et al., 2015). Carrot leaves also contain functional components such as fatty acids. It has been reported that unsaturated fatty acids are mainly contained in green vegetables (Almeida et al., 2009). Carrot leaves are consumed in the form of dry tea which does not make full use of their nutritional value.

Plant factories are systems whereby control is exerted over the environmental factors necessary for plant growth, such as light, temperature, humidity, carbon dioxide (CO2), and mineral nutrient composition. These controlled environments enable rapid, year-around mass production of crops (Cha et al., 2012). Recently, the number of crops grown in plant factories has been gradually increasing, with the majority of crops produced being leafy vegetables such as ice plant (Cha et al., 2014) and sowthistle (Qin et al., 2008; Cho et al., 2012). However, plant factories are not universally applicable because of the associated high running costs. In recent years, the adoption of fusion technologies that integrate automation technology into agriculture has increased (Lee and Cha, 2015). In addition, as climate change is threatening the stable production of agricultural crops, there is a growing interest in alternative means of cultivation (Heo et al., 2010; Lee and Cha, 2015; Lee et al., 2016).

As a consequence of global warming, changes in the water temperature of the equatorial oceans are now causing anomalous climate conditions worldwide (Neelin, 1990). Recent years have seen an increase in the frequency of El Nino events, and the World Meteorological Organization has indicated that 2016 was the hottest year in the history of meteorological observations. In addition, the Korea Meteorological Administration has stated that the climate of Korea is changing as a consequence of the El Nino phenomenon (KMA, 2016), with winters tending to be warmer and wetter compared to that in previous years. Such changes have important implications for crop cultivation.

Under optimal growth conditions, plants grow rapidly throughout the year and do not display negative responses to unfavorable environmental conditions. Moreover, it is possible to exert environmental control in a purposeful manner so as to produce not only high yielding but also high quality crops (Morimoto et al., 1995). Plant factories are mainly based on hydroponics systems because these minimize external pollution. In general, the optimum culture concentration for the production of leafy vegetables during hydroponic cultivation is equivalent to an electrical conductivity (EC) of approximately 1.0-2.0 dS·m-1. When plants are grown in an optimal environment, their growth rate tends to be faster compared to that of plants grown under normal growth conditions. Therefore, it is desirable that the culture nutrient solution concentration is maintained at an optimum level for plant growth and development. Ikeda et al. (1992) reported that the growth rate of lettuce grown under optimal conditions was eight times faster than that under normal conditions. This rapid growth rate is a major cause of physiological disorders related to mineral nutrition (Ikeda et al., 1992; Um et al., 2010).

The plant material used was carrot cultivar ‘Yangmyeon 5 chon’ (KOREGON Co., Korea). The experiment was conducted from April 18, 2016 to May 20, 2016. Seeds were sown in a urethane sponge (2.5 × 2.5 × 2.5 cm) and seedlings were transplanted to a growing bed once two leaves had emerged. The hydroponic culture system consisted of a three-layer thin-film hydroponic (NFT) system (240 × 60 × 200 cm: L × W × H) with a tank volume of 110 L and a culture volume of 90 L. The supply of mineral nutrition was started when the true leaves had emerged, and the pH and EC of the culture nutrient solution were measured every 1 to 2 d and adjusted as necessary. 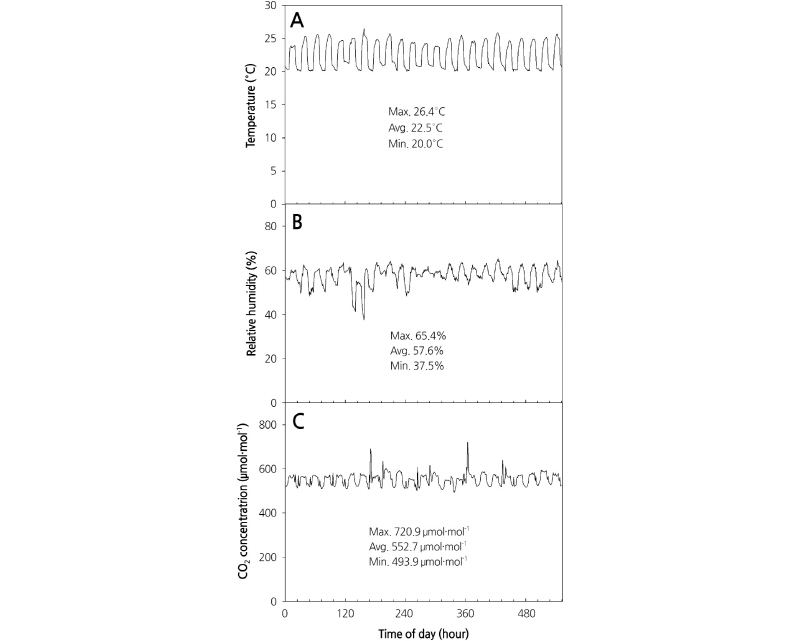 Leaf length, leaf area, plant fresh weight, and plant dry weight were measured for plants grown in each concentration of culture nutrient solution. Roots developed in the form of fibrous roots rather than a single taproot, and therefore root data were omitted.

Carrot shoots were collected on 33 days after the initiation of treatment and the leaves were lyophilized. The lyophilized samples were thereafter stored in a dark incubator at 4°C until analysis. Total phenolic content was determined by using a slightly modified Folin-Ciocalteu method (Ainsworth and Gillespie, 2007). The lyophilized samples were ground into a powder and samples (approximately 4 mg, 5 replicates) were mixed with 4 mL of 80% acetone and sonicated for 15 min (Sk5210HP; Hangzhou Nade Scientific Instruments, Zhejiang, China). The extract solution was maintained under dark conditions at 4°C for 12 h and then centrifuged at 3,000 × g for 2 min. The supernatant of the sample was used for analysis. The subsequent procedure followed that described by Lee and Oh (2015). The unit is expressed as gallic acid-equivalent (mg) per gram of dry weight (mg GAE/g DW). Antioxidant activity was measured using 2,2′-azino-bis (3-ethylbenzothiazoline- 6-sulfonic acid) (ABTS; Sigma-Aldrich, St. Louis, Mo., USA) (Miller and Rice-Evans, 1996). The solution extracted with 80% acetone was treated at -20°C for 12 h. The subsequent process followed that described by Lee and Oh (2015). A standard curve was prepared using 6-hydroxy-2,5,7,8-tetramethylchroman-2-carboxylic acid (Trolox; Sigma-Aldrich, St. Louis, Mo., USA) and the used unit was Trolox-equivalent antioxidant capacity (mM) per dry weight (mM TEAC·g-1 DW).

A sample of lyophilized material (approximately 0.1 g, 5 replicates) was mixed with 1.5 mL of acetonitrile containing 0.5% HCl and hydrolyzed in a water bath at 80°C. The hydrolyzed solution was then subjected to ultrasonic extraction for 30 min (Sk5210HP; Hangzhou Nade Scientific Instruments, Zhejiang, China). The extract solution was then centrifuged at 3,000 × g for 20 min and the supernatant was filtered using a 0.22 μm syringe filter (Noble Bio, Hwaseong, Korea). Polyphenol compounds in the extract solution were analyzed using a high-performance liquid chromatograph system (YL9100; Younglin, Anyang, Korea). The polyphenol compounds were isolated using an ACE-5-AQ column (4.6 × 250 mm; Advanced Chromatography Technologies Ltd., Reading, UK) equipped with a guard column. The column temperature was 30°C and the injection volume was 10 μL. Solvents A and B were water containing 100% acetonitrile and 0.5% acetic acid, respectively. The solution gradient conditions were as follows: solvent A acetonitrile 0-10% (10 min), 10-20% (30 min), 20-30% (40 min), 30-40% (50 min), 40-80% (60 min), 80-0% (61 min), and 0-0% (70 min). The flow rate was 0.8 mL·min-1 and the absorbance was measured at 320 nm using standard chlorogenic acid (Sigma-Aldrich, St. Louis, MO, USA) and kaempferol (Sigma-Aldrich, St. Louis, Mo., USA). The units were expressed in mg per 100 g of dry weight (mg/100 g DW). 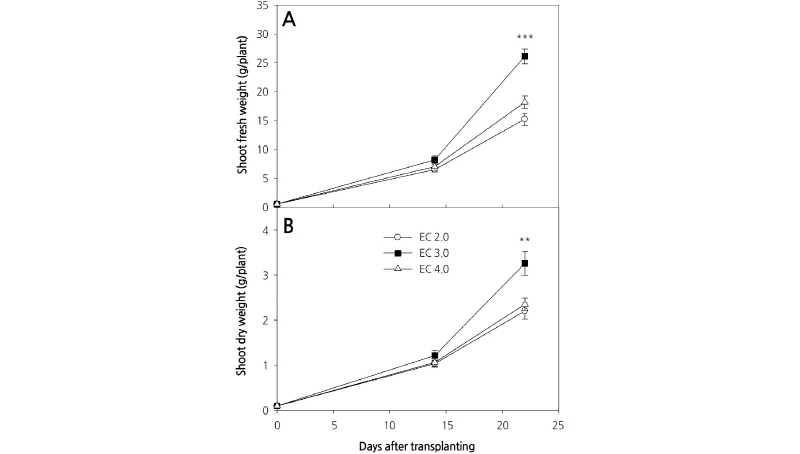 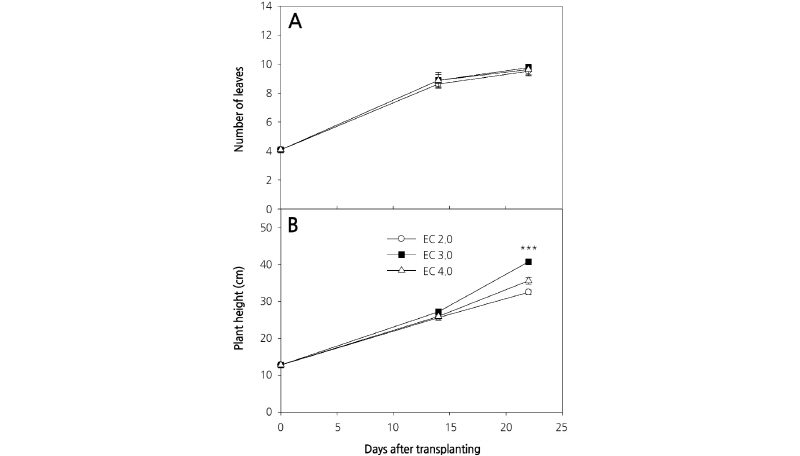 Number of leaves (A) and height (B) of carrot plants grown under different levels of culture nutrient solution electrical conductivity (EC) in a closed.type plant factory system. Error bars are SEM (n = 8). ***Significant at p ≤ 0.001.

The results for chlorogenic acid and kaempferol content in response to different treatments are shown in Fig. 6. The contents of both chlorogenic acid and kaempferol were highest in plants grown at EC 2.0 dS·m-1 and lowest in plants grown at EC 4.0 dS·m-1. Chlorogenic acid is a polyphenolic compound formed through an ester bond between coffeic acid and quinic acid (Clifford, 2000). It is used as a preservative and flavoring agent that prevents the decay of food in container packages, and has be shown to contribute to the prevention of cancer and cardiovascular diseases caused by oxidative damage in vivo. Chlorogenic acid in the human diet is found primarily in coffee, potatoes, burdock, and sweet potato (Fang et al., 2005). However, here we observed that carrot leaves contain both chlorogenic acid and kaempferol, and thus have potential as a functional food. Although the phenol content per gram of dry weight was highest in plants grown under the EC 2.0 dS·m-1 treatment, it would be more appropriate to cultivate carrot at EC 3.0 dS·m-1 since plants grown at this concentration have a higher dry weight. The results of the present study indicate that an EC 3.0 dS·m-1 culture nutrient solution combined with a cultivation period of 20-25 d is optimal for cultivating carrot leaves in a plant factory. Carrot leaves grown under such conditions have potential as a functional food because they are rich in phenols.

This research was supported by Wonkwang University in 2015.