Validation and Modification of the Shoot Growth Model in Cut Roses

In the climate of Korea, it is difficult to maintain consistent year-round production of cut roses in greenhouses because of high temperature in summer and low radiation in winter. Therefore, it is important to determine the optimal growing conditions by analyzing the effect of seasonal environmental changes in greenhouses on the growth of cut roses. In this study, a model for rose shoot growth developed by a previous study was validated and modified. The results of the experiment showed that the model had a high coefficient of determination for growth of shoots and performed well for predicting the growth in four cultivars of cut roses: Rosa ‘Antique Curl’, R. ‘Beast’, R. ‘Ahoi’, and R. ‘Fuego’ (R2 = 0.84, 0.87, 0.79, and 0.90, respectively). However, at the harvest stage, the model over- and under-performed, respectively, for the cultivars ‘Antique Curl’ and ‘Fuego’. The maximum leaf area coefficient of the leaf area equation was modified to take into account the leaf area of cultivars ’Antique Curl’ and ’Fuego’. Re-experimentation showed that the modification improved the performance of the model for both cultivars while maintaining the high coefficient of determination. The growth model developed by the previous study is applicable for greenhouse production of cut roses in Korea. Therefore, this shoot growth model may be used to aid growers in maintaining the optimal growing environment within greenhouses and to provide base data for greenhouse environmental control and monitoring systems.

Cut roses are one of the most important cut flowers in the global flower market. In 2019, the cultivation area of cut roses in Korea was 247 ha, which accounted for 20% of the total domestic cut flower cultivation area (MAFRA, 2020). In Korea, 90% of cut roses are cultivated in greenhouses using the soil-less culture arching technique with rock wool media (Kim and Lee, 2008; MAFRA, 2020).

The growth of cut roses is influenced by microclimate conditions such as temperature, light, and CO2 in greenhouses (Lentz, 1998; Dayan et al., 2002). Pasian and Lieth (1994) reported that light affects rose growth and development. Temperature and light also affect the physiological characteristics of cut roses, such as bent necks, blind shoots, and bullheads (Sarkka, 2003; Seo and Kim, 2013). Thus, it is important for growers to understand the relationship between environmental factors (light and temperature) in the greenhouse and the growth responses of cut roses (Shi et al., 2019).

In general, the optimal temperature for greenhouse cultivation of cut roses is known to be 24–27°C in the day and 18°C at night (RDA, 2012). Photosynthesis of roses is affected by temperature. Between 18 and 30°C, the net photosynthetic rate of roses increases with increasing temperature. However, above 37°C, the net photosynthetic rate decreases sharply. Above 40°C, permanent damage occurs with rapid wilting and drying out (Kim and Lieth, 2012).

The yield of crops grown in a greenhouse depends largely on the amount of light intercepted by plants (Fjeld et al., 1994). In general, the light saturation point of a rose plant for photosynthesis is 851 µmol m-2 s-1 PAR (37 klux), but there are differences among varieties (RDA, 2012). The optimal daily integral light of rose plants is 12–15 mol·d-1 (Mortensen et al., 1992). There is a positive correlation between productivity and accumulated light intensity. More than 75% of biomass production in rose plants can be obtained by light interception (Mor and Halevy, 1980). Therefore, among environmental factors, light has the greatest effect on the growth of rose plants in greenhouses (Jiao and Grodzinski, 1998; Blom and Tsujita, 2003). Also, light quality can affect the development of roses. Red light promotes bud break by weakening apical dominance and promotes flower development by activating the sink strength of flower buds, but far-red light has the opposite effect (Cline, 1991).

Four cultivars of standard cut roses were used as plant materials. Two domestic cultivars, ‘Antique Curl’ and ‘Beast’, are from cut rose greenhouses located at Noejo-ri, Jori-eup (Farm A), and two foreign cultivars, ‘Ahoi’ and ‘Fuego’, are from cut rose greenhouses located at Galhyun-ri, Tanhyun-myun (Farm B) in Paju, Gyeonggi-do, Korea. These four cultivars were cultivated by the soil-less culture arching technique with rock wool media. Seventy-two flowering shoots of each cultivar were cut at the same height (above the first five leaflet) and labeled on the same day.

The environmental data of the greenhouses (Farm A and B) were measured from September 7 to November 3, 2017. Light intensity, temperature, and relative humidity were measured once per hour using a wireless data logger (WatchDog Micro Stations, Spectrum Technologies Inc., USA). Supplemental lighting was not applied during the experiment period.

To measure the growth of cut roses during a flowering cycle, 72 flowering shoots of the 4 cultivars were pruned (above one five leaflet) on the same day. Then, 10 sprouting axillary buds from each cultivar were harvested once per week. Harvested shoots were separated as stems, leaves, or flowers. Then, shoot length and leaf number were measured. Total leaf area was measured with an LI-3100C Area Meter (LI-COR Biosciences, USA), and the dry weight of stem, leaves, and flower was measured after drying in a drying oven (HSD-38RM, Vision Scientific Co., Ltd, Korea) at 75°C for 72 hours.

The shoot growth model is based on the “short-cut” light use efficiency concept. Light use efficiency (LUE) is the ratio of dry mass and daily intercepted light (I) by plant canopy (Q) (Eq. 1 and 1.a) (Monteith, 1994). The extinction coefficient (k) for I was given as 0.65 (Goudriaan, 1994).

Leaf area index (LAI) in Eq.1 was calculated by the Michaelis-Menten kinetics relationship between shoot DM and leaf area per shoot (Eq. 5) (Kim and Lieth, 2012). Maximal potential leaf area per shoot was 0.1211 m2 and theoretical shoot DM was 0.1232 g when the first leaf began to unfold in ‘Kardinal’ rose cultivar. Thus, LAI was simulated by function of shoot DM per unit area (m2).

Environment in the Greenhouse

Environmental data in the greenhouse were measured by a data logger every hour. Daily mean temperature recorded during a flowering cycle from cutting to harvest was 23.8 ± 0.7°C at farm A and 23.6 ± 1.2°C at farm B. Mean daily accumulated light was 7.0 ± 2.0 MJ·d-1 at farm A and 7.5 ± 3.4 MJ·d-1 at farm B. Environmental conditions (temperature and light) of farms A and B showed no statistically significant differences during the experiment period.

Plant growth characteristics (shoot length, leaf number, leaf area, and dry mass) were measured by harvesting 10 shoots of each cultivar once a week, and the plant growth of the 4 cultivars at the harvest stage was compared by statistical analysis (Table 1). The comparison of plant growth characteristics at the harvest stage showed that all were greater in ‘Fuego’ than the other cultivars except for leaf number. In particular, the leaf area of ‘Fuego’ was 2 times higher than that of ‘Antique Curl’ on farm A. ‘Beast’ and ‘Ahoi’ showed no statistically significant differences in shoot length and total dry mass. ‘Beast’ and ‘Ahoi’ had intermediate growth characteristics between ‘Fuego’ and ‘Antique Curl’. In the case of ‘Antique Curl’, both leaf area and dry mass were lower than for the other cultivars (Table 1). As there was no difference in the environmental conditions between farm A and farm B, the growth differences of the four cultivars may be because of varietal characteristics. From these results, it may concluded that ‘Antique Curl’ is a small type rose and ‘Fuego’ is a large type rose. 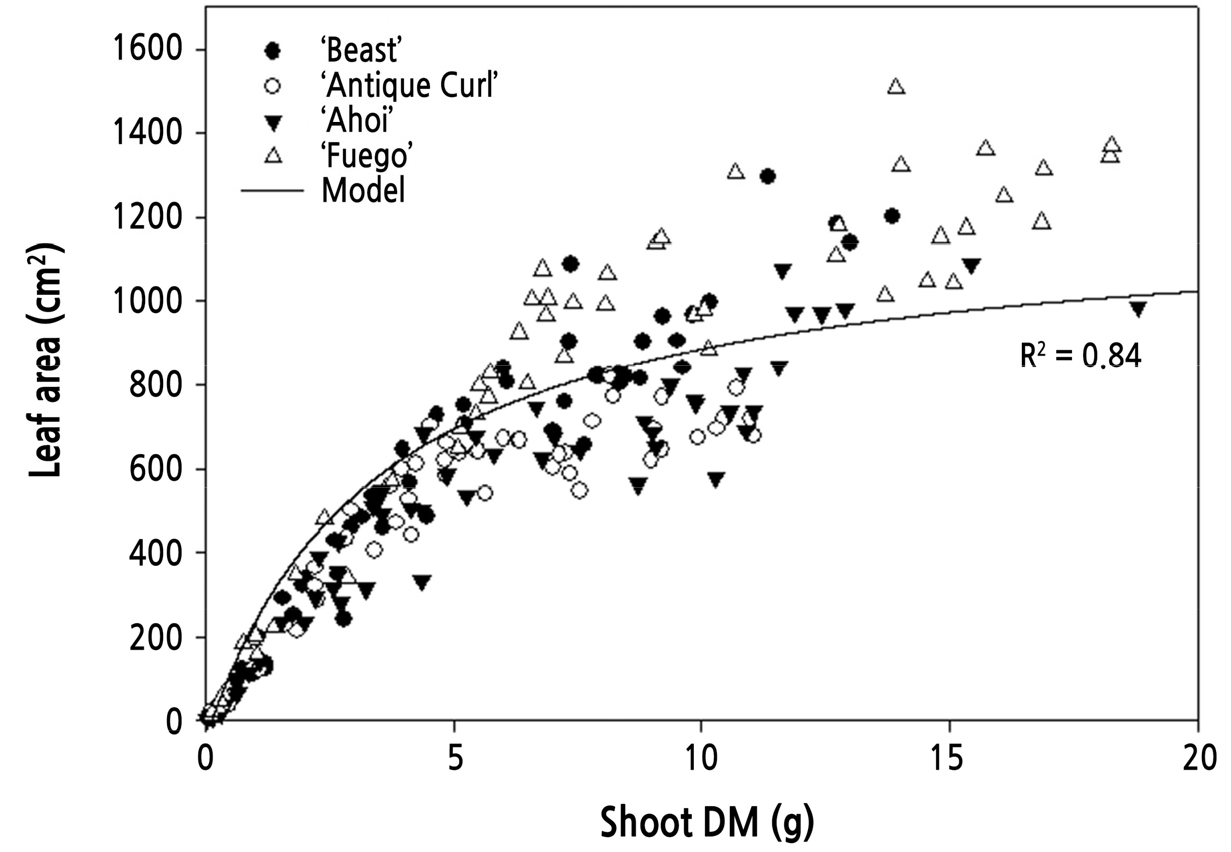 Validation of the Shoot Growth Model 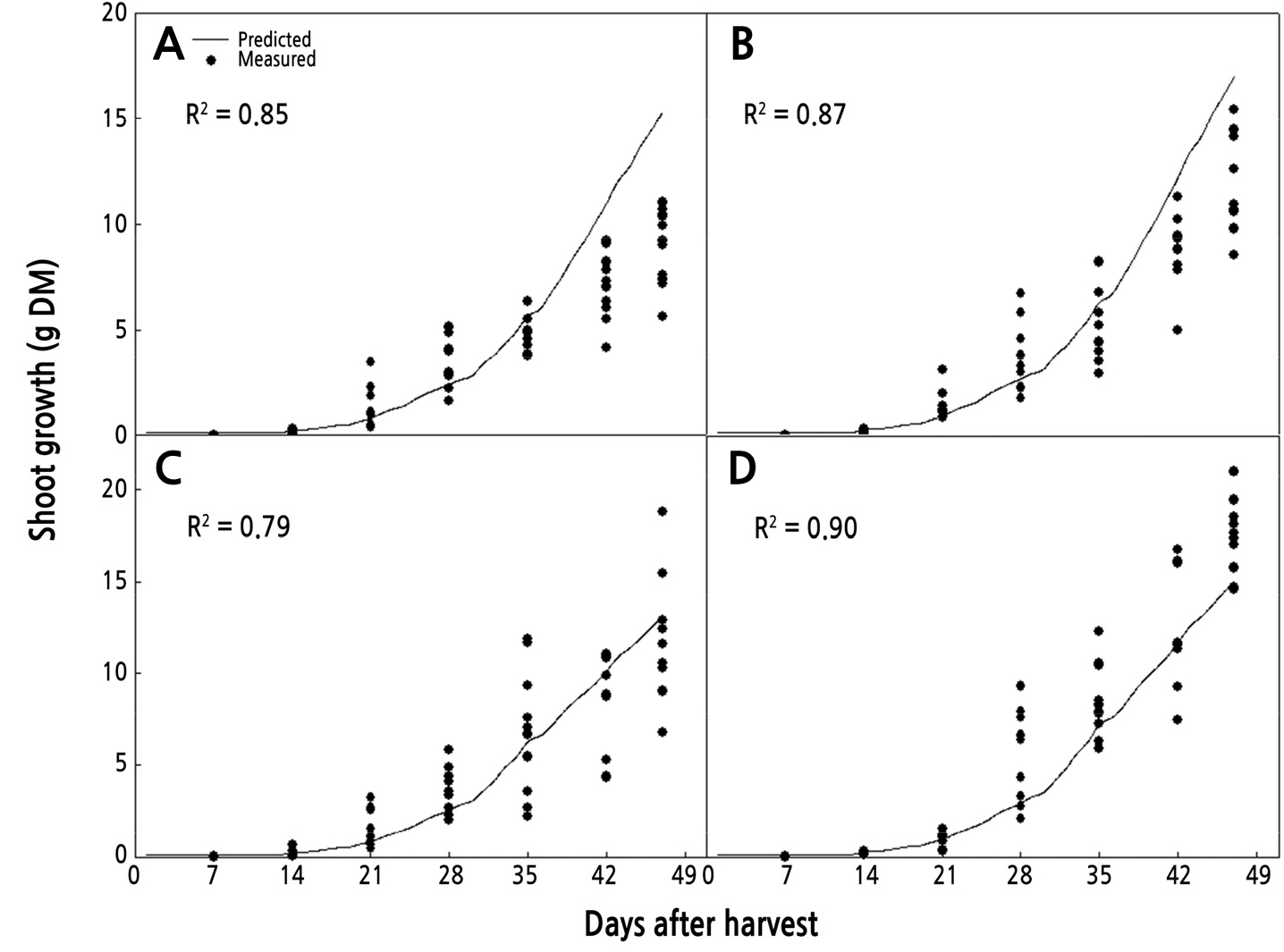 The results of the simulation of shoot growth using Eq. 4 showed that the shoot growth simulation of farm A was higher than that of farm B. Although there was no statistically significant difference in the environmental conditions between farm A and farm B during the experiment period, the relative growth rate by the temperature function was higher on farm A. This was because the optimal temperature was maintained during the early stage and the light intensity was higher from the 32nd day to harvest on farm A.

In the comparison between measured and estimated shoot growth, shoot growth for ‘Antique Curl’ was well estimated from cutting until the 35th day; however, from the 35th day to harvesting the shoot growth was overestimated (R2 = 0.85) (Fig. 2A). ‘Beast’ was even better estimated than ‘Antique Curl’ from cutting to harvest, but there was an overestimate shown at harvest (R2 = 0.87) (Fig. 2B). ‘Ahoi’ was well simulated in all growth phases, but a high deviation of the data caused a low coefficient of determination (R2 = 0.79) (Fig. 2C). ‘Fuego’ had the highest coefficient of determination value among the four cultivars (R2 = 0.90), and the whole simulation was well estimated. However, it showed an underestimate at the final harvesting stage (Fig. 2D). The results of the validation experiment showed that the existing model (Eq. 4) provides good simulation of the shoot growth of the four rose cultivars with a high coefficient of determination (Fig. 2). It is believed that this model can be applied to different cultivars and different farms by inputting only environmental factors (temperature and light). Thus, this model can predict shoot growth changes with changes in the environment and can provide support for growers in efficiently controlling the microclimate in greenhouses, such as supplemental light, screening, and heating, as well as managing harvest timing. Temperature and light are the most important factors that affect the growth of cut roses (Mor and Halevy, 1980; Park and Kim, 2019), and light control interacts with temperature control, i.e., supplemental lighting and heating using high-pressure sodium (HPS) lamps and shading screens for reducing the temperature (Sarkka, 2003). Therefore, to control these factors, it is important to understand the interaction between light and temperature. This model can be a valuable tool for controlling light and temperature more efficiently by predicting the growth of cut roses with changes in environmental factors (Park and Kim, 2019). 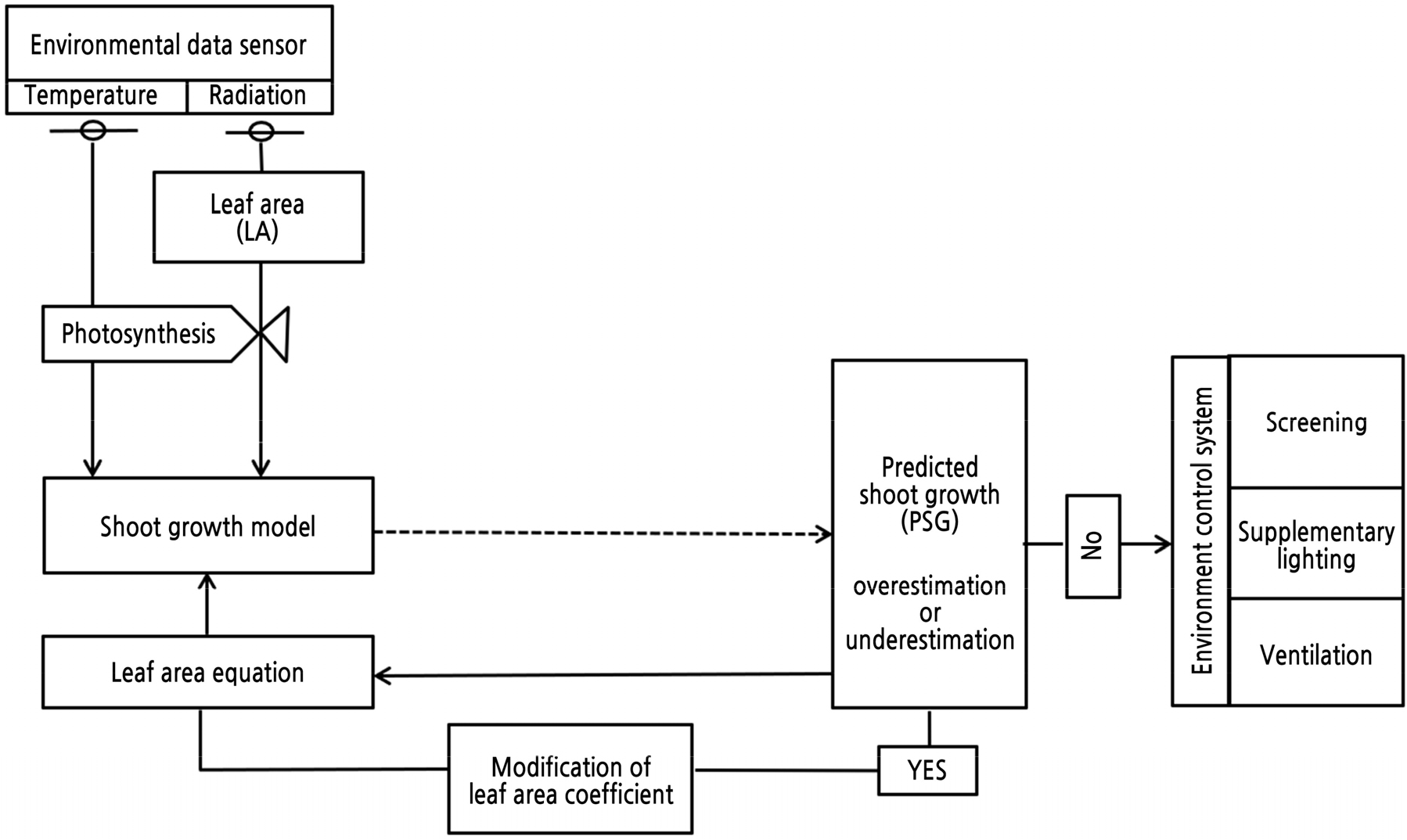 In conclusion, the applicability of the rose shoot growth model developed by a previous study was validated as a means to support growers in controlling the microclimate in greenhouses, such as for temperature and light, which affect rose growth. The model also can be used as basic input data for software used in an automated environmental control system. The results of the validation showed that this model provided a good estimate of the shoot growth rate with a high coefficient of determination (R2 = 0.84, 0.87, 0.79, and 0.90) in four cultivars of standard roses at two rose farms. If the leaf area is smaller or larger than the maximum leaf area coefficient of the leaf area equation, a simple modification of the maximum leaf area coefficient value can increase the accuracy of the shoot growth model. This can be used to support growers in deciding which environmental control strategy can provide the optimal environment for high quality and high productivity (Fig. 3).

This work was supported by the 2021 Research Fund of the University of Seoul.