Cell wall constituents and cell wall hydrolase (CWH) enzyme activities play crucial roles in extending the postharvest storability of apples. 1-Methylcyclopropene (1-MCP) has been extensively used to regulate cell wall metabolism of apples during storage. However, the consequences of 1-MCP can differ according to its concentration and the cultivar being treated. In this study, we investigated how 1-MCP concentrations (0.5 and 1.0 µL·L-1) regulate the cell wall components and the activities of CWH in two new apple cultivars, ‘Arisoo’ and ‘Picnic’, during their cold storage. In 1-MCP-treated fruits, uronic acid (UAC) and total sugar contents (TSC) were significantly higher in ‘Arisoo’, but only UAC was significantly higher in ‘Picnic’, when compared with control fruits. 1-MCP significantly inhibited CWH activities in both cultivars. The results observed between 0.5 and 1.0 µL·L-1 did not diverge obviously in ‘Arisoo’, however, 0.5 µL·L-1 generated better results over 1.0 µL·L-1 in ‘Picnic’. Conclusively, the results suggest that it is economically more appropriate to use 0.5 µL·L-1 1-MCP to extend the postharvest storability of apples, especially ‘Arisoo’, because of its ability to delay the solubilization of fruit softening-related cell wall components and to suppress CWH enzyme activities.

‘Arisoo’ and ‘Picnic’ are two new apple cultivars in Korea. Both are considered appealing in terms of color and palatability, and their internal ethylene contents are low while their antioxidant activities are high (Ban et al., 2014; Yoo et al., 2016; Kim et al., 2020). However, knowledge regarding the suitable 1-MCP concentration to extend the storability of these two cultivars is still limited. In our previous study (Kwon et al., 2021), we examined the effects of different concentrations and application frequencies of 1-MCP on fruit quality characteristics of ‘Arisoo’ and ‘Picnic’ during six-months cold storage. We examined five treatments (0 µL·L-1, 0.5 µL·L-1, 1 µL·L-1, 0.5+0.5 µL·L-1, and 1+1 µL·L-1) and reported that single application of 0.5 µL·L-1 1-MCP effectively reduced internal ethylene concentration (IEC) and preserved the quality characteristics of both cultivars. However, for some fruit qualities of ‘Picnic’, such as firmness, weight loss, and soluble solids content, it was necessary to apply 1-MCP up to a rate of 1 µL·L-1 in either a single (1 µL·L-1) or double (0.5 + 0.5 µL·L-1) application. However, our first study only focused on the fruit quality attributes and lacked information on how the 1-MCP concentrations influenced the softening-related cell wall metabolism of ‘Arisoo’ and ‘Picnic’.

In the present study we aimed to evaluated how two concentrations of 1-MCP (0.5 µL·L-1 and 1.0 µL·L-1; chosen based on our previous findings) influence the changes in cell wall components and activities of CWH during the 6-month cold storage of two new cultivars of apple, ‘Arisoo’ and ‘Picnic’.

The fruit of two apple cultivars, ‘Arisoo’ and ‘Picnic’, were harvested on September 5th and 13th, 2018, respectively, from the orchard at the Apple Research Institute in Mungyeong, Republic of Korea. Only fruits of equal sizes without any visible infection and injuries were selected for the experiment. The selected fruits were immediately treated with different 1-MCP concentrations (0.5 and 1.0 µL·L-1) (SmartFreshTM, 3.3% w/w, AgroFresh, Yakima, Washington, USA) in enclosed containers for 18 h. Untreated fruits were used as the control. Then, the fruits were kept in storage for 6 months at 0 ± 1°C with 90–95% relative humidity. The levels of cell wall constituents and enzyme activities of fruits were measured every two months during storage. Prior to each measurement, the fruits were kept at 20°C for 24 h after taking out from cold storage.

Extraction and Measurement of Uronic Acid and Total Sugar Contents

Components of cell walls were extracted according to Lin et al., (2018). Frozen flesh of fruit (10 g) was homogenized in boiling 95% ethanol. Then, the endogenous enzymes were inactivated and the alcohol-soluble solids were removed by heating the homogenates at 80°C for 40 min. After heating, the residue was collected by filtration through a filter paper (No.541, Whatman International Ltd., Kent, England). Then, the residue was washed three times with 100 mL of 95% ethanol, followed by 100 mL of 95% acetone. The washed residue was air-dried at 30°C overnight. The alcohol insoluble substances (AIS) remained as powders (Lee and Kim, 2010) and were used for analysis of polysaccharides. Ten milligrams of AIS were extracted with sulfuric acid (2 mL) (Duksan Pure Chemical Co., Ansan, Korea) and distilled water (48 mL). Then, the extract was filtered and kept at 20°C until further analyses (Lee and Kim, 2010).

The total sugar content (TSC) was measured by mixing diluted AIS solution (0.5 mL) with 5% phenol (0.5 mL). Then, the solution was vortexed following the addition of sulfuric acid (2.5 mL). The solution was allowed to stand for 30 min at 20°C, and then the absorbance was determined by a UV-spectrophotometer (UV-1800, Shimadzu, Tokyo, Japan) at 490 nm. Glucose (Sigma-Aldrich Co., St. Louis, Missouri, USA) was used to prepare a standard curve and TSC units are expressed as g·kg-1 AIS. To measure the uronic acid content (UAC), diluted AIS solution (0.5 mL) was mixed with 95% sulfuric acid (3 mL). The mixture was boiled at 30°C for nearly 30 min and cooled down for about 10 min at 20°C. After cooling, 0.1% carbazole (0.1 mL) (Daejung Chemicals and Metals Co., Siheung, Korea) was added. Then, the mixture was vortexed and incubated at 30°C for 2 h. The absorbance was measured with a UV-spectrophotometer (UV-1800, Shimadzu, Tokyo, Japan) at 530 nm. D-galacturonic acid (Sigma-Aldrich Co., St. Louis, Missouri, USA) was used as a standard and UAC is shown in units of g·kg-1 AIS.

Cell wall hydrolase (CWH) extraction was done according to Pressey (1983). First, frozen tissue (50 g) was homogenized in sodium phosphate buffer (100 mL) that contained polyvinylpolypyrrolidone (0.075 g). After that, sodium chloride (8.766 g) was added and stirred for 3 h. After being centrifuged for 1 h at 12,000 × g, the supernatants were collected and stirred overnight with ammonium sulfate, and then centrifuged again. After centrifugation, the resulting pellets were dissolved and dialyzed for 48 h in sodium phosphate buffer. The resulting supernatants were centrifuged again for 1 h at 22,000 × g. The crude extracts were gathered and maintained at -80°C until following analysis. All the above processes were done at approximately 4°C.

The activities of the following CWHs were measured after extraction: β-galactosidase, α-galactosidase, β-glucosidase, α-mannosidase, α-arabinosidase, and β-xylosidase (β-Gal, α-Gal, β-Glc, α-Man, α-Ara, and β-Xyl, respectively). Activities were determined by measuring the content of ρ-nitrophenol released from ρ-nitrophenyl-pyranoside (Sigma- Aldrich Co., St. Louis, Missouri, USA). The crude extract (250 µL) was mixed with 125 µL of ρ-nitrophenyl- pyranoside solution (2%) and 250 µL of sodium acetate buffer. The solution was incubated at 30°C for 1 h, and then 1 mL of sodium carbonate (1 M) was added. Then, the absorbance was observed using a UV-spectrophotometer (UV-1800, Shimadzu, Tokyo, Japan) at 410 nm. One unit of enzyme activity was defined as the extent of activity that releases 100 mol of ρ-nitrophenyl per kg (fresh weight) for 1 h at 30°C.

The UAC of both ‘Arisoo’ and ‘Picnic’ apple cultivars decreased sharply in control fruits during cold storage (Fig. 1A and 1B). In ‘Arisoo’, both of the 1-MCP concentrations resulted in the maintenance of the UAC until the end of the storage period (Fig. 1A). In ‘Picnic’, UAC decreased in all the treatments, although the UAC in treated fruits was higher than that in the control fruit. Among the 1-MCP treatments in ‘Picnic’, 0.5 µL·L-1 resulted in higher UAC than 1.0 µL·L-1 (Fig. 1B).

Uronic acid contents in cell walls of ‘Arisoo’ (A) and ‘Picnic’ (B) apples treated with 1-MCP at different concentrations (control, 0.5, and 1.0 µL·L-1) and stored for 6 months at 0 ± 1°C. Data points denote means of 3 replications ± standard error.

The TSC tended to decrease with storage time regardless of the cultivar or 1-MCP treatment (Fig. 2A and 2B). However, the TSC throughout the 6-month cold storage period was higher in ‘Arisoo’ apples in both 1-MCP treatments compared to in control ‘Arisoo’ apples (Fig. 2A). In ‘Picnic’ apples, however, the TSC of the 1-MCP-treated apples did not differ significantly from that of the control apples throughout the storage period (Fig. 2B).

Total sugar contents in the cell walls of ‘Arisoo’ (A) and ‘Picnic’ (B) apples treated with 1-MCP at different concentrations (control, 0.5, and 1.0 µL·L-1) and stored for 6 months at 0 ± 1°C. Data points denote means of 3 replications ± standard error. 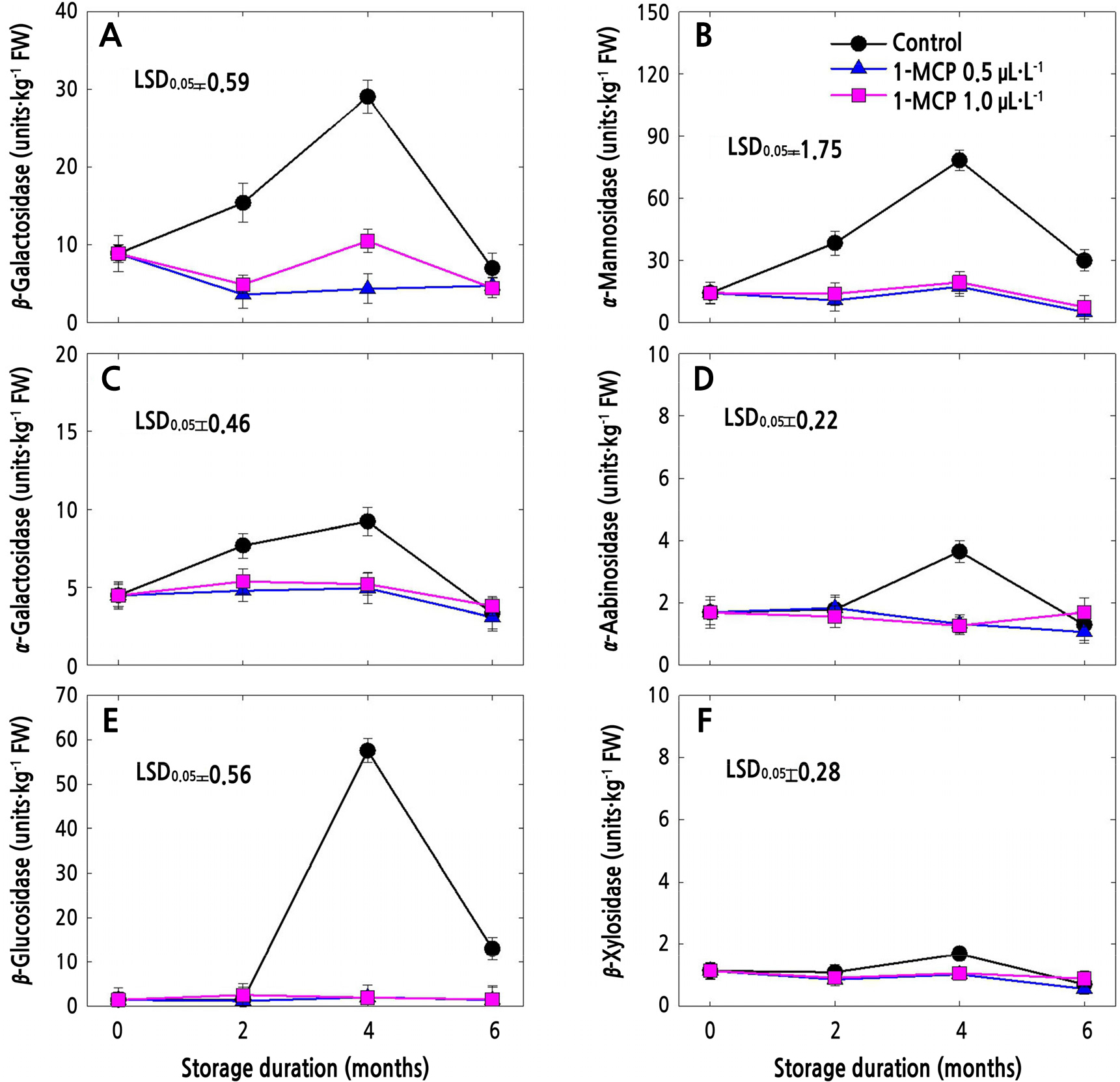 Cell wall hydrolase activities of ‘Arisoo’ apples treated with 1-MCP at different concentrations (control, 0.5, and 1.0 µL·L-1) and stored for 6 months at 0 ± 1°C. Data points denote means of 3 replications ± standard error. One unit was defined as the extent of activity that releases 100 mol of ρ-nitrophenol per kg (fresh weight) for 1 h at 30°C. 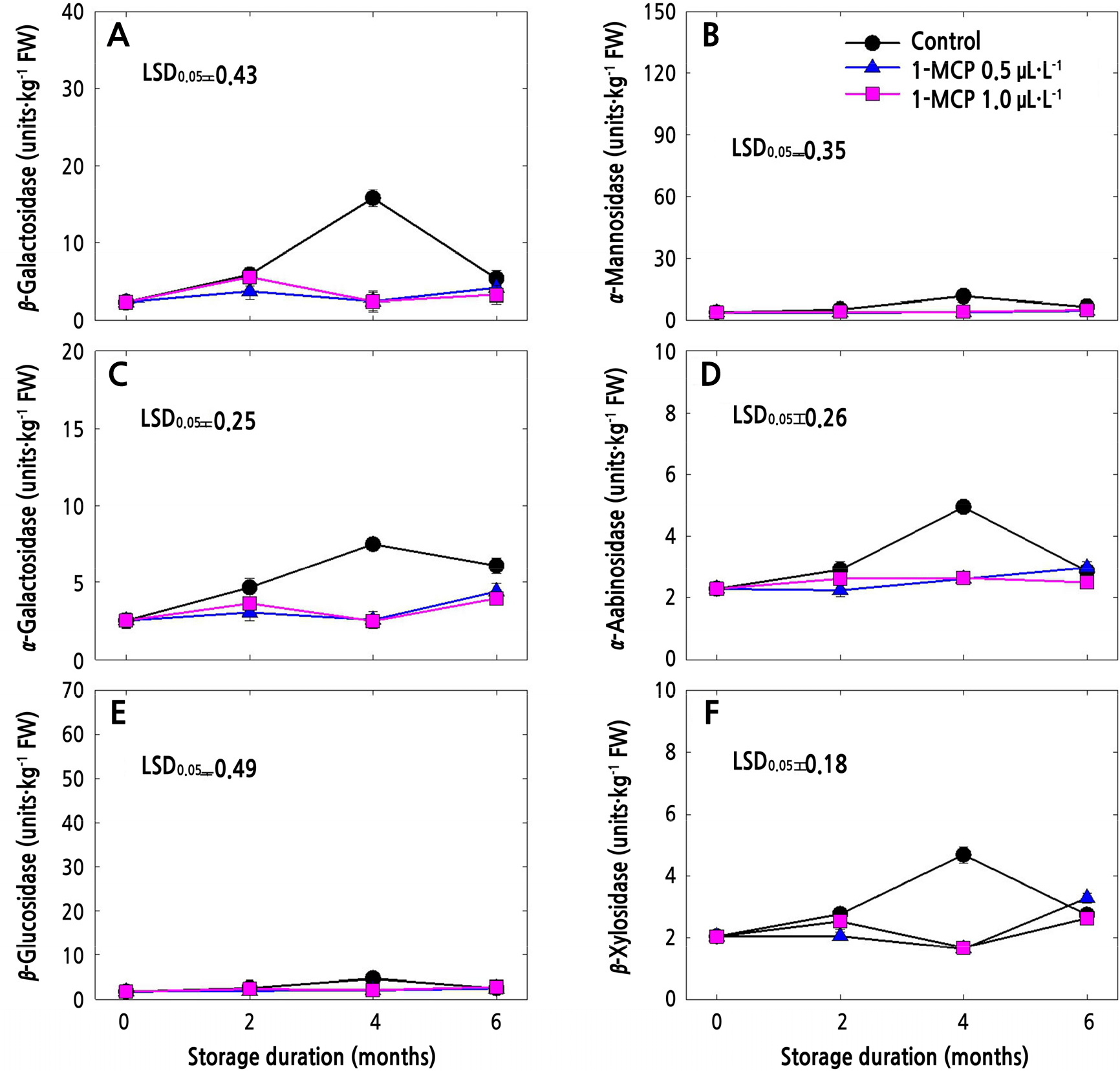 Cell wall hydrolase activities of ‘Picnic’ apples treated with 1-MCP at different concentrations (control, 0.5, and 1.0 µL·L-1) and stored for 6 months at 0 ± 1°C. Data points denote means of 3 replications ± standard error. One unit was defined as the extent of activity that releases 100 mol of ρ-nitrophenol per kg (fresh weight) for 1 h at 30°C.

In the present study, it was observed that 1-MCP, either at 0.5 or 1.0 µL·L-1, significantly maintained the level of UAC in ‘Arisoo’ apple up to the end of the cold storage (Fig. 1A). Although neither concentration of 1-MCP was able to totally prevent the solubilization of total sugars during storage, 1-MCP kept the total sugar levels significantly higher than those of control fruits for the ‘Arisoo’ cultivar (Fig. 2A). In the ‘Picnic’ cultivar, the effect of 1-MCP was significant on UAC but not on TSC (Figs. 1B and 2B). 1-MCP slowed down the solubilization of uronic acid throughout the cold storage of ‘Picnic’, and 0.5 µL·L-1 was more effective than 1.0 µL·L-1. Previous studies have also pointed out that 1-MCP can preserve the TSC and UAC of several apple cultivars (Win et al., 2021b; Yoo et al., 2020a, 2020b, 2021). Our results are supported by other studies that have found that the effect of 1-MCP on TSC and UAC may vary according to the 1-MCP concentration (Yoo et al., 2020a) and the cultivar being treated (Win et al., 2019; Yoo et al., 2021). It is also possible for different 1-MCP concentrations to have no effect in certain cultivars (Yoo et al., 2020b).

Both of the 1-MCP concentrations were effective in slowing down the CWH activities in both ‘Arisoo’ and ‘Picnic’ during the 6-month cold storage (Figs. 3 and 4). CWH activities that are closely associated with ethylene production (Win et al., 2019) regulate fruit softening during storage (Vicente et al., 2007; Wei et al., 2010; Krongyut et al., 2011; Chang et al., 2017; Yoo et al., 2018). Ethylene plays an important role in fruit softening; therefore, the ability to reduce ethylene biosynthesis and action could be a viable commercial method for reducing fruit softening. The relationship between ethylene production and CWH activities was also reported in the apple cultivars (Yoo et al., 2021). Slower CWH activities indicate delayed fruit softening (Payasi et al., 2009; Wei et al., 2010; Gwanpua et al., 2014) and thus a longer storage period. This can be related with our previous study in which both 0.5 and 1.0 µL·L-1 of 1-MCP effectively reduced the IEC and prolonged the shelf life by maintaining the fruit quality of ‘Arisoo’ and ‘Picnic’ fruits (Kwon et al., 2021). We also observed negative correlations between some CWH activities and cell wall components, indicating that 1-MCP may delay the softening of fruits by controlling the activities of CWHs that regulate the contents of certain cell wall components, such as UAC and TSC.

Our findings reveal that 1-MCP can effectively slow down CWH activities and the solubilization of cell wall components in two new apple cultivars. Meanwhile, the consequences of 1-MCP concentrations varied depending on the cultivar. In ‘Arisoo’, different concentrations of 1-MCP had similar effects, while in ‘Picnic’, the lower concentration was more effective in slowing down CWH activities and maintaining UAC. Surprisingly, neither concentration of 1-MCP affected the TSC of ‘Picnic’ apples, suggesting the necessity of carrying out more tests on this cultivar in the future. In conclusion, 1-MCP could extend the storability of the two apple cultivars during 6 months of cold storage. However, a 1-MCP concentration of 0.5 µL·L-1 is more economic and efficient for slowing down the softening of fruit by controlling the activities of CWHs and the levels of cell wall components in cold-stored apples, especially ‘Arisoo’. 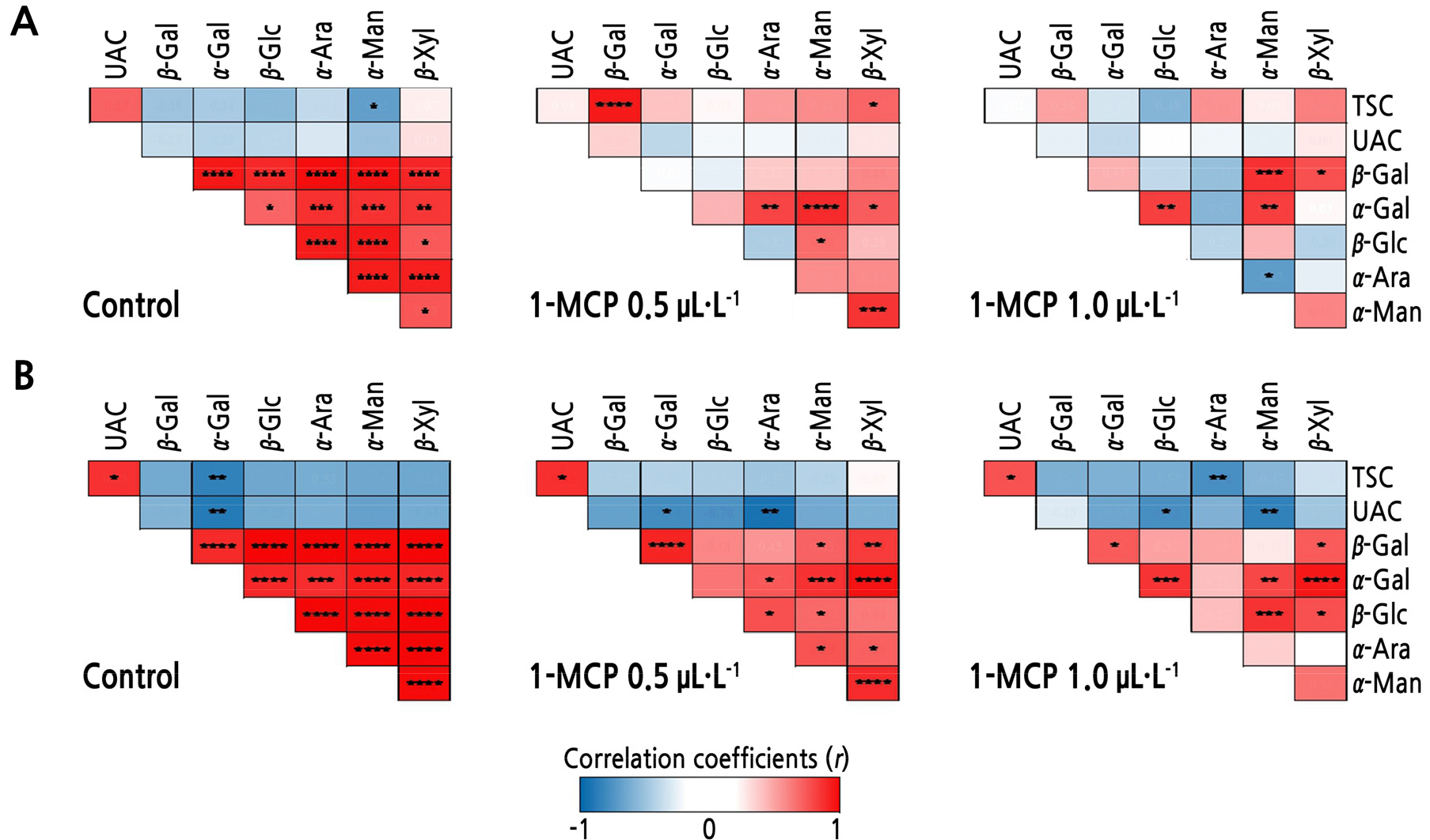