In apple (Malus domestica), red coloration is an attractive trait for consumers. The color of fruit skin is determined by the distribution of carotenoids and anthocyanins in the skin tissue. ‘Fuji’ apples have red stripes over a yellow-green background, and ‘Mishima’, a ‘Fuji’ bud sport variety, has superior coloration compared to its parent. To investigate the genetic mechanism underlying the enhanced pigmentation in ‘Mishima’ fruit skin, we characterized the expression of pigment biosynthesis genes in ‘Fuji’ and ‘Mishima’ apples during fruit development. CIELAB data showed lower L* (relative lightness) and higher a*/b* ratio (relative redness) values in ‘Mishima’ apples, suggesting increased red pigmentation, which correlated with the levels of pigment biosynthesis gene expression. In ‘Mishima’, two carotenoid biosynthesis genes (MdZISO and MdLCY-ε) were upregulated at many stages of fruit development. Furthermore, enhanced red pigmentation was resulted from higher expression levels of three anthocyanin regulatory (MdMYB10, MdWD40, and MdGST) and three structural (MdCHS, MdCHI, and MdF3’H) genes, suggesting their positive interaction. These data further our understanding of the molecular basis of the enhanced skin color of ‘Fuji’ apple varieties.

The ‘Fuji’ apple cultivar, a cross between the ‘Ralls Janet’ and ‘Red Delicious’ varieties, is valued for its high quality and visual appearance and is widely grown (Yoshida et al., 1995; Yoo et al., 2018). ‘Fuji’ apple is categorized into the striped group (Masseron et al., 1995; Iglesias et al., 2012). ‘Fuji’ apple skin differs from other varieties due to the presence of randomly distributed red and green areas. The coloring is usually yellow-green with red highlights, but can sometimes have either a pinkish blush or be nearly all red. Depending on the strain, the ‘Fuji’ apple skin is either striped or blush over a yellow-green background (Marquina et al., 2004).

Late-season harvests frequently result in poor skin coloration of the ‘Fuji’ cultivar, which is associated with decreased light availability (Jakopic et al., 2007). Interventions, such as fruit bagging, using reflective film, and chemical treatments for improving the red skin color, are labor-intensive and not economically justifiable (Ju et al., 1999;Lim et al., 2019). The best solution for preventing the lack of skin color in apples grown late in the season is to grow ‘Fuji’ apple strains that are less affected by decreasing light. There are several ‘Fuji’ cultivars (bud sports) with enhanced red coloration compared to the standard ‘Fuji’ cultivar (Parker and Guerra, 2008; Iglesias et al., 2012; Olivares-Soto et al., 2020). For example, the ‘Mishima’ cultivar, identified in 2001, shows a significant improvement in fruit skin color at harvest. However, little is known about the molecular mechanisms underlying the differences in pigment accumulation in apple skin (Stanger et al., 2017).

‘Fuji’ and ‘Mishima’ apples (Malusdomestica) were collected at the Apple Research Institute in Gunwi, Korea (36°16' N, 128°28' E), and full bloom was recorded as April 28, 2016. For each cultivar, a total of nine fruit were randomly harvested from three trees at each of five fruit development stages: stage 1 (S1: young fruit stage at 23 days after full bloom (DAFB)), stage 2 (S2: 87 DAFB), stage 3 (S3: 155 DAFB), stage 4 (S4: 164 DAFB), and stage 5 (S5: 177 DAFB) (Fig. 1). After sampling, the skin color of the fruit was immediately analyzed using a CR-400/410 colorimeter (KONICA MINOLTA, Japan) after calibration with a white calibration plate. The chromaticity was recorded in CIELAB and color was expressed as three values: L* for the relative lightness with a range from 0 (black) to 100 (white); a* from green (－) to red (+); and b* from blue (－) to yellow (+), extending from －60 to 60. The ratio of a* and b* values was then used to calculate hue (a*/b*). For each fruit, the mean color measurements were calculated from three points taken from the fruit’s equator. After measuring, the peel (less than 1 mm in thickness) was carefully removed, frozen in liquid nitrogen, and stored at －80°C until use.

Isolation of RNA and cDNA Synthesis

Apple peels were finely ground using a 6870 Freezer/Mill (SPEX SamplePrep, USA) with the continuous addition of liquid nitrogen to maintain －80°C. Total RNA was isolated using the modified CTAB method as described (Chang et al., 1993), and cDNA was immediately synthesized using a QuantiTect Reverse Transcription Kit (QIAGEN, Germany). The first reaction to eliminate genomic DNA was at 42°C for 10 min and 4°C for 5 min. The second reaction to reverse transcribe RNA by polymerase chain reaction (PCR) was at 42°C for 20 min and 95°C for 3 min. The synthesized cDNA was stored at －20°C and used subsequently for quantitative real-time PCR. The concentration (µg·µL-1) and quality (A260/A280 ratio) were tested using a PLUS Spectrophotometer (Bio-Rad, USA). RNA degradation and contamination were assessed on a 0.8% agarose gel.

Quantitative real-time PCR was performed using 2× qPCRBIO SyGreen Blue Mix Lo-ROX (BioD, Korea). Primers for carotenoid and anthocyanin biosynthesis genes were reported previously and used for qRT-PCR in this study (Ampomah-Dwamena et al., 2012; El-Sharkawy et al., 2015). They are listed in Table 1. Reactions were performed in triplicates on a Rotor-Gene Q (QIAGEN, Germany) at 95°C for 2 min followed by 40 cycles of 95°C for 10 s, 60°C for 15 s, and 72°C for 20 s. The transcript levels were measured, and relative quantification was performed using the cycle threshold (Ct) 2-△△Ct method. MdAct and MdACT amplicons served as the endogenous controls for normalizing expression between samples.

Although ‘Fuji’ and its bud sport cultivar, ‘Mishima’, have similar genetic backgrounds, they show notable differences in the percent and intensity of red color in their fruit skins (Parker and Guerra, 2008). The chromaticity values of ‘Fuji’ and ‘Mishima’ fruits are shown in Fig. 2. The chromaticity values of the two varieties showed a similar pattern of overall change during fruit ripening, as expected because they are both red-fruit cultivars. As the fruit skin color progressively changed at five DAFB, the value of L* increased up to S2 and then decreased, while the a*/b* ratio continued to increase. The two values remained similar in both ‘Fuji’ and ‘Mishima’ fruit skins until S2, but there were differences after S3. The S3 ‘Mishima’ fruit showed a lower L* value and a higher a*/b* value than S3 ‘Fuji’ fruit, and the differences were greatest at S4. Our results show that the a*/b* ratio corresponded with the intense red pigmentation in the skin of ‘Mishima’ apples and can be used to estimate the anthocyanin concentrations (Singha et al., 1991). 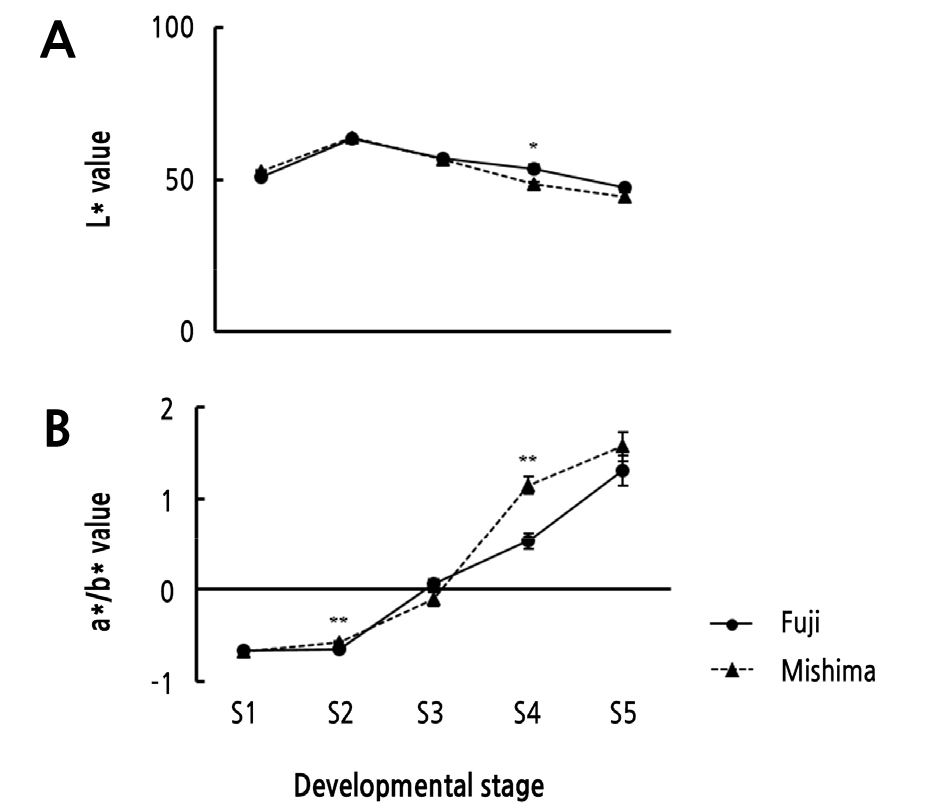 RNA was isolated from the fruit skin samples of the two cultivars at five developmental stages and cDNA was synthesized immediately for quantitative real-time PCR. The ‘Fuji’ and ‘Mishima’ apples are categorized in the striped pattern group, so their fruit skin coloration is determined by a blend of carotenoids and anthocyanins (Kim et al., 2003). We analyzed the expression of carotenoid biosynthesis genes, including two genes encoding isomerase enzymes, MdZISO and MdCRTISO, and MdLCY-ε, which is known to have a positive influence on apple skin color at the ripe stage, and evaluated their expression relative to skin color (Ampomah-Dwamena et al., 2012). In addition, we compared the expression of the carotenoid biosynthesis genes in ‘Mishima’ to the expression levels in ‘Fuji’ (Fig. 3).

Expression patterns of three carotenoid biosynthesis genes (A) MdZISO, (B) MdCRTISO, and (C) MdLCY-ε in the skins of ‘Fuji’ and ‘Mishima’ fruit at the five fruit development stages (S1-S5). Error bars represent mean ± SE of triplicates. * and ** indicate p < 0.05 and 0.01, respectively.

The expression levels of MdZISO, MdCRTISO, and MdLCY-ε gradually increased with ripening in both apple cultivars, but a higher level of MdZISO and MdLCY-ε expression was observed in the ‘Mishima’ fruit skin than in ‘Fuji’ fruit skin. The expression levels of MdZISO and MdLCY-ε peaked in the S4 fruit. The relative expression level of MdZISO was 10.30 in ‘Mishima’ and 7.22 in ‘Fuji’, with the mean level in ‘Mishima’ about 1.43 times greater than that in ‘Fuji’. A similar pattern was observed for MdLCY-ε at S4. The relative expression level of MdLCY-ε was 1.04 and 0.39 in ‘Fuji’ and ‘Mishima’, respectively, and the mean level in ‘Mishima’ was about 2.67 times greater than that in ‘Fuji’. A previous study showed that accumulation of lutein, which is responsible for yellow coloration, is controlled by MdLCY-ε, which is expressed at higher levels in fruit skin than in the flesh in apple (Delgado-Pelayo et al., 2014). These two genes were expressed at significantly higher levels in S4 fruit and likely correlate with the lower L* value of the CIELAB data. Taken together, our data suggest that mature ‘Mishima’ fruit skins accumulate more carotenoids than ‘Fuji’ fruit skins.

Genes related to the anthocyanin pathway in apples have been well-characterized (Kim et al., 2003). To explore which genes are associated with the improved red skin color in ‘Mishima’ fruit, we investigated the expression levels of three regulatory genes (MdMYB10, MdWD40, and MdGST) and five structural genes (MdCHS, MdCHI, MdF3’H, MdDFR, and MdUFGT) in ‘Fuji’ and ‘Mishima’ fruit (Fig. 4). 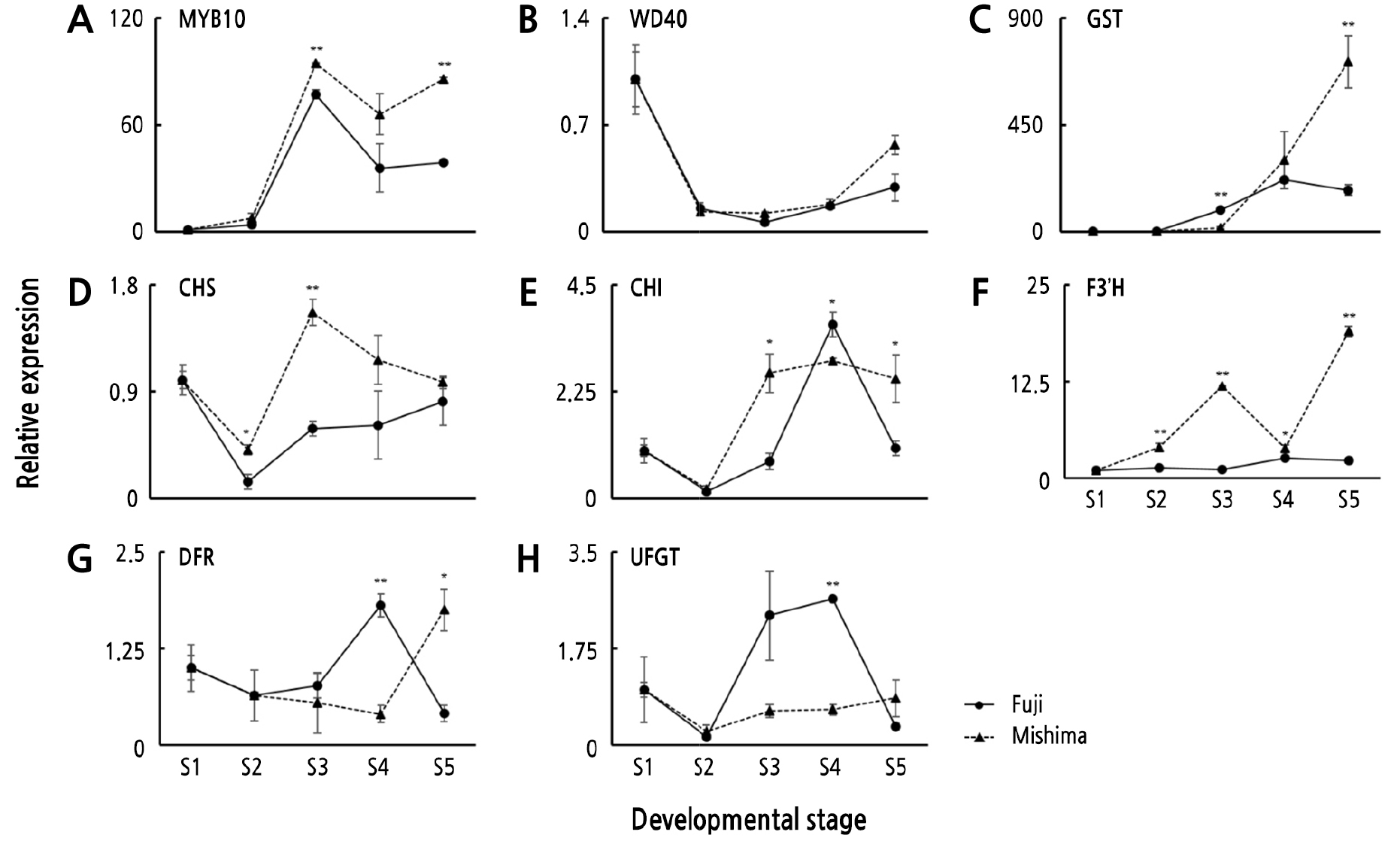 The authors claims no conflict of interest.