According to the Korea Meteorological Administration, the average temperature nationwide in summer 2018 was 25.4°C, the highest recorded since 1973. This anomalous heat wave was strongly affected by high atmospheric pressure from Tibet and the North Pacific anticyclone. However, in summer 2019, the extension of the North Pacific anticyclone to the Korean peninsula was delayed by frequent inflows of cold air from the northern Bering Sea, resulting in fewer heat waves than those in summer 2018.

The global changes in climate have largely been attributed to increased CO2 emissions and human activities (Masson- Delmotte et al., 2018). The global mean surface temperature has increased by approximately 1°C above the average in the pre-industrial era (1,850－1,900). Global warming is estimated to increase by 0.2°C per decade owing to ongoing anthropogenic emissions (greenhouse gases). Over the coming decades, climate change and increased CO2 levels are projected to impact the yield of all crops (Lobell and Gourdji, 2012; Sultan et al., 2019).

Many previous studies have focused on the relationship between the content of soluble sugars and the gene expression and enzyme activities involved in the sugar metabolism during the developmental stages of pear fruit (Moriguchi et al., 1992; Tanase and Yamaki, 2000; Yamada et al., 2007; Zhang et al., 2014; Jia et al., 2021; Lee et al., 2021). However, to date, there is little research on the impact of climate change on the accumulation patterns and composition of soluble sugars during the developmental stages of pear fruit through comparisons of annual meteorological variables.

In this study, we aimed to identify whether differences in fruit sugar composition are related to changes in atmospheric and soil conditions observed over the two years. We investigated the content of three major soluble sugars (glucose, fructose, and sucrose) and their accumulation patterns throughout the developmental stages of pear fruit and collected atmospheric and soil environmental data during the growing seasons of 2018 and 2019 through real-time sensor-based monitoring. Therefore, the results obtained may provide a better understanding of the impacts of climate change on the sugar composition of pear fruit.

Pear (Pyrus pyrifolia) cv. Niitaka fruit were harvested throughout two successive seasons (2018 and 2019) from the pear orchard, which received standard horticultural management including fertilizer application, irrigation, and disease control. Between 10 and 15 fruit were randomly sampled from the same fruit-bearing position at 15-day intervals during the period of 42 to 177 days after full bloom (DAFB) in each year. The fruit collected at each sampling period were frozen in liquid nitrogen and then stored at －60°C until analyzed. Unless otherwise stated, all experiments were performed independently and in triplicate.

The stored samples were freeze-dried and then ground into a fine powder. Soluble sugars were extracted from 30 mg of the powdered samples with occasional shaking for 3 hours in 3 mL of distilled water. The extracts were centrifuged at 13,000 × g for 5 min. The supernatants were passed through a 0.45 µm membrane filter and then injected into the chromatographic system. Soluble sugars were analyzed using high-performance liquid chromatography equipped with a refractive index detector (2414, Waters, MA, USA) and a REZEX RPM (Phenomenex, CA, USA) column (300 × 7.8 mm).

Measurement of Atmosphere and Soil Conditions in the Pear Orchard

Meteorological data were recorded automatically on a data logger (Xspark, Nare Trend Inc., Korea) at 5-min intervals. Soil temperature and soil moisture were measured at a 15-cm depth using Hydra Probe II soil sensors (SDI-12, Stevens Water Monitoring System Inc., OR, USA). The daily mean values of temperature, atmospheric humidity, and solar insolation were calculated during the period of 80 to 180 DAFB in 2018 and 2019. The mean daily values were determined by calculating the average of all the 5-min interval values for each day. Daily mean temperature and humidity values for soil were calculated during the same period using similar metrics.

All analyses were performed using python (version 3.8.3). Pearson correlation analysis, Shapiro-Wilk test, T-test, and Wilcoxon signed-rank test were performed in the python packages “scipy” (version 1.6.1). Normality of the meteorological data for each time interval was assessed using the Shapiro–Wilk test of normality (α= 0.05) (Shapiro and Wilk, 1965). T-tests were conducted when the distribution of both groups satisfied normality (when the value of the Shapiro-Wilks test for both groups is greater than 0.05). However, if normality is not valid (when the value of the Shapiro-Wilks test is less than 0.05 in either or both groups), the Wilcoxon signed-rank tests were performed (Wilcoxon, 1945). The significance level was set to 0.05. 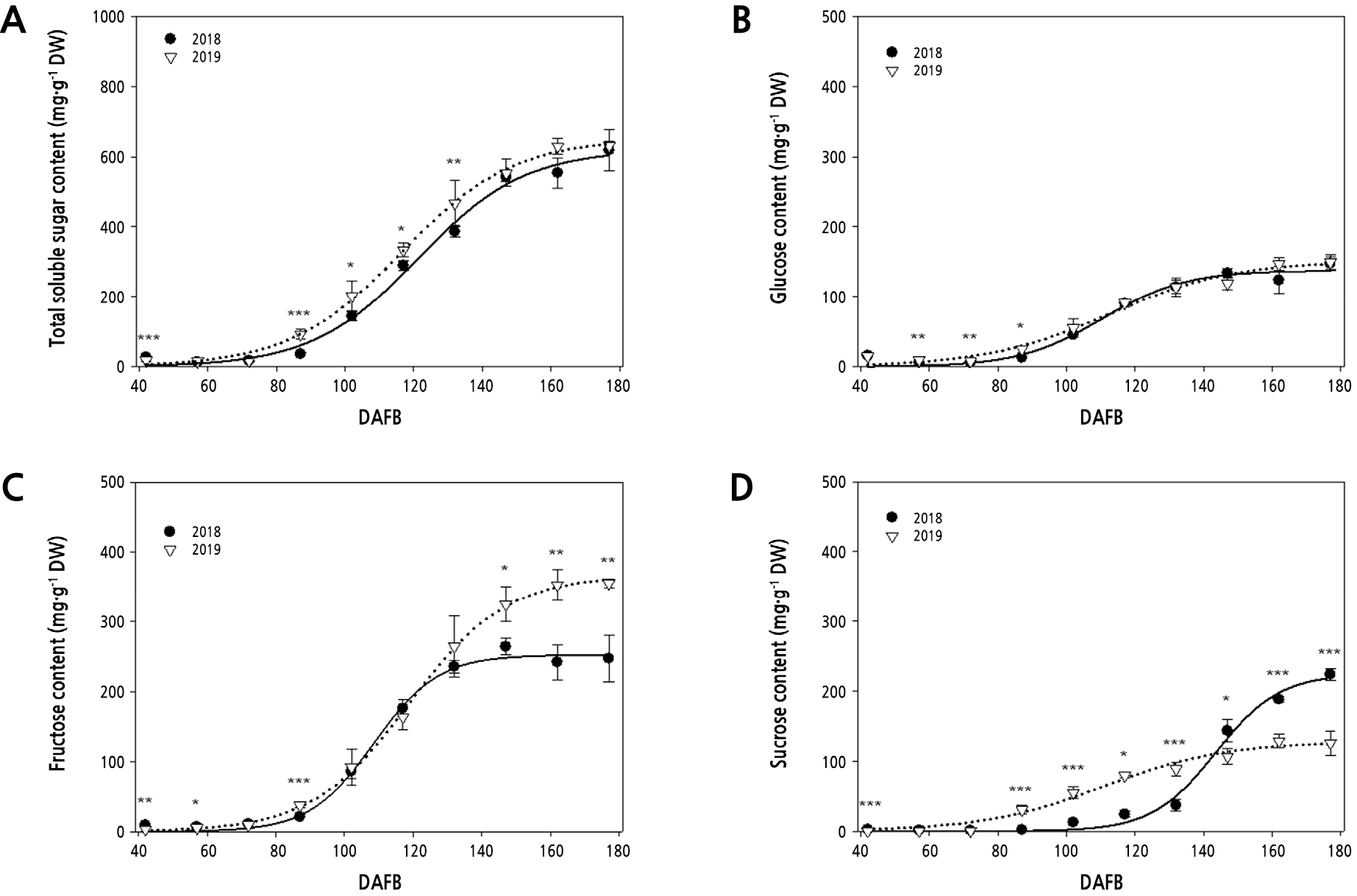 Measurement of Environmental Factors Over the Two Years 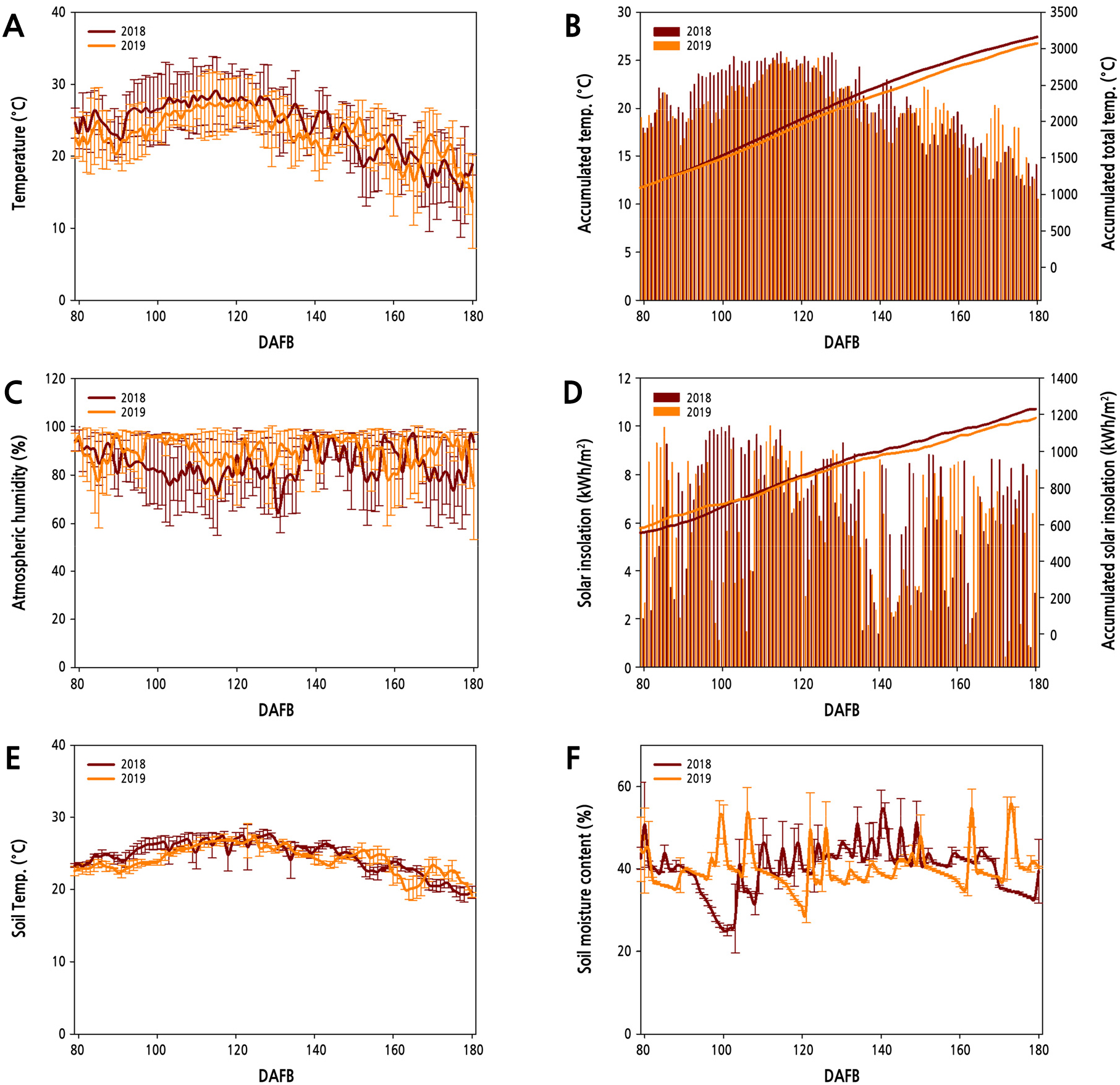 Seasonal patterns of (A) temperature, (B) accumulated temperature, (C) atmospheric humidity, (D) solar insolation, (E) soil temperature, and (F) soil moisture content from 2018 to 2019 at the study site. Each value represents a daily observation during the period from 80 to 180 days after full bloom (DAFB) in 2018 (solid maroon line) and 2019 (solid orange line). Values represent the mean ± SD.

Difference in Meteorological Variables between the Two Years 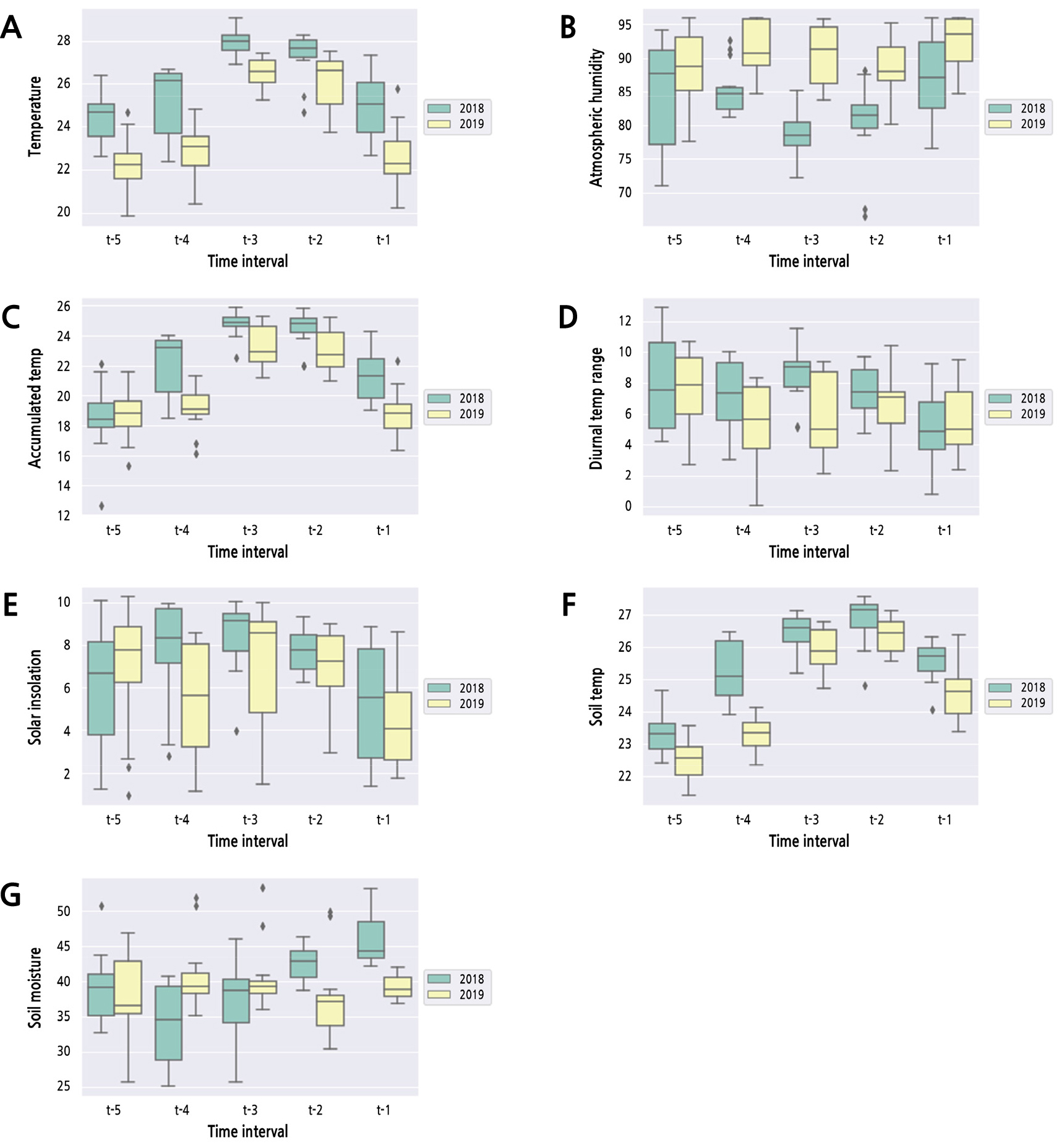 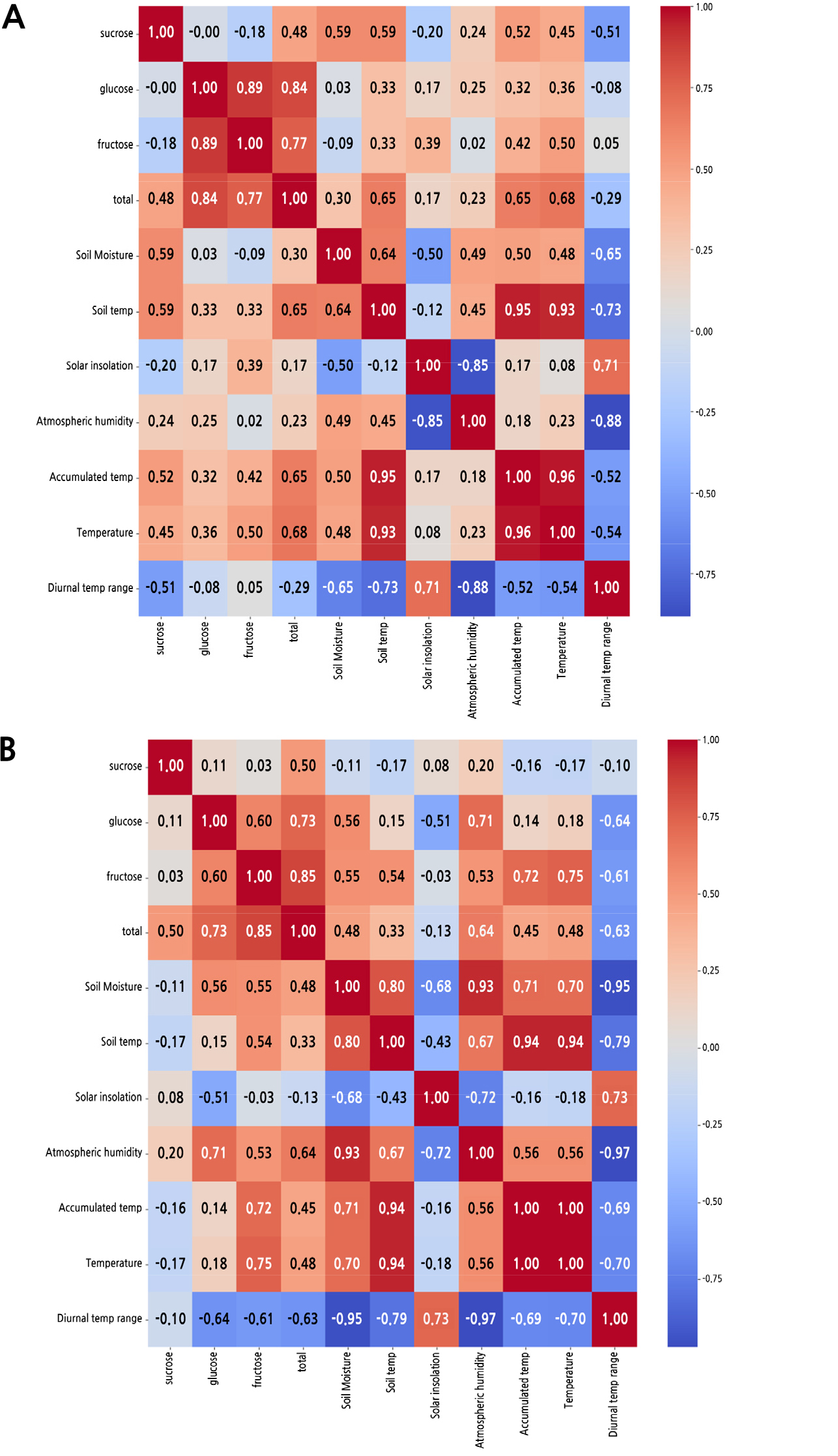 This study was conducted to investigate the impacts of climate change on the quality of pear fruit during the growing seasons of 2018 and 2019. Between the two years, notable differences in the accumulation patterns of fructose and sucrose were noted from 132 DAFB until maturity of pear fruit; however, no difference in glucose accumulation was observed (Fig. 1). While sucrose accounted for approximately one-third of the total soluble sugar measured in 2018, fructose was the predominant sugar in 2019, accounting for 56.3% of the total soluble sugar at maturity. These differences in sugar composition might be responsible for the differences in the sweetness of pear fruit over the two years. The composition and overall amount of sucrose, fructose, and glucose directly impact the perceived sweetness of the fruit (Tanase and Yamaki, 2000). During fruit development, annual differences in the soluble sugars content and their accumulation patterns identified in this study have also been reported in previous studies (Fadda and Mulas, 2010; Oikawa et al., 2015; Mesa et al., 2016).

The effect of temperature on the sugar content during fruit development is well documented in the literature. In a previous study of Liu et al. (2013), the sucrose content in pear flesh increased significantly by 11.8% two weeks after a high-temperature treatment when compared with that in untreated flesh at harvest. Their result is consistent with our finding, where the sucrose content in 2018 increased dramatically after 132 DAFB. The average temperature from late-June to mid-August (73 to 132 DAFB) was 1.8°C higher in 2018 (26.3°C) than in 2019 (24.5°C). Kano (2006) observed that sucrose accumulation in melon fruit on 40 DAFB was much more promoted in a high-temperature treatment than that in unheated fruit. The sucrose content was higher in rice grains grown in a greenhouse than in grains grown in the field (Li et al., 2006); the day and night temperatures in the greenhouse were 2°C and 0.3°C higher than the ambient air temperature, respectively. Their results also showed that activities of sucrose synthase and invertase decreased in high-temperature-treated grains. Therefore, our finding that fructose accumulation at the maturation stage in 2018 was lower than that in 2019 suggests that it is related to a decrease in the activity of sucrose synthase by high temperatures (Schmolzer et al., 2016; Stein and Granot, 2019). Sucrose synthase has been shown to play a role in sucrose cleavage rather than sucrose synthesis (Turner and Turner, 1975; Stein and Granot, 2019).

In contrast to our results, Yamada et al. (1994) reported that the sucrose content in the flesh of two apple cultivars decreased with increasing fruit temperature from 21 to 35°C, but the content of fructose and glucose increased. However, the results obtained by Yamada et al. (1994) are thought to be due to a raised hexose to sucrose ratio in the fruit immediately after the high-temperature treatment, similar to the findings of Richardson et al. (2004). Besides, a high-temperature treatment negatively affected the sucrose content compared with plants subjected to a low-temperature treatment in sugarcane (Bonnett et al., 2006) and watermelon (Fukuoka et al., 2009). Sun et al. (2012) investigated the combined effects of elevated CO2, nitrogen, and temperature on sugar composition in strawberry. However, the effect of high-temperature treatment on the sugar composition was negligible. The contents of fructose and glucose increased 1.3-fold under elevated CO2 treatment compared to those under the ambient CO2 condition, regardless of temperature. Taken together, changes in the sugar content and the types of sugar accumulated under high temperature stress differ depending on the intensity and duration of the stress and the fruit crop species.

However, our results are still insufficient to elucidate the effects of extreme high temperatures, especially during the summer period, on the accumulation pattern and composition of soluble sugars in pear fruit. The extent of the effects of these temperature changes on fructose and sucrose content during fruit development stages and/or at maturity of pear fruit remains unclear. Given the acceleration of global warming, further studies are needed to evaluate the effects of extreme high temperatures, particularly during the summer period, on the sugar composition at different developmental stages of pear fruit, especially in terms of the intensity, duration, and frequency of the high temperature.